After backlash, Ola cabs clarifies: Driver who irked pro-Congress passenger has not been fired 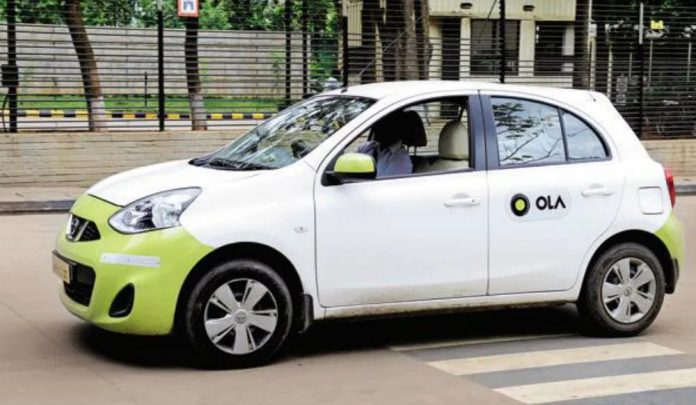 Following a backlash on Twitter, Ola cabs has issued a clarification on their Twitter page that a driver who was targeted by a pro-Congress supporter for his political views has not been fired. In a tweet, Ola cabs said that we all should be respectful of India’s democratic values and encourage a healthy exchange of thoughts. It further added that no parties in the case has been penalised from using the platform and urged everyone to be tolerant towards contrarian viewpoints.

We are respectful of all personal views and like India’s democratic values, encourage healthy exchange of thoughts. None of the parties involved in this case have been penalized from using the platform and we urge everyone to respect difference of opinion at all times. @kanavdm https://t.co/JlfFPFJ1no

The Clarification from Ola came after a large number of social media users had expressed their anguish over the fact that the Ola may be taking disciplinary action against the driver for his political views. Many had threatened to boycott the cab aggregator if the driver is removed from Ola network.

Earlier today, a flaky Management Consultant touched off a controversy when he took to Twitter to express his conniption against his Ola cab driver for holding a differing opinion than his. Lamenting about his experience on Twitter, the Management Consultant, Kanav Sharma, tagged official Twitter handle of Ola cabs to express his fulminations over the driver’s audacity of not conforming with his worldview.

He said, “Congress created JNU which is a prositution hub of Tukde Tukde gang. You know who was Nehru? He was India’s first PM but his grandfather was a Muslim who converted to Hinduism to fool Indian people.” (2/n)

He continued, “you are one of those anti-national people who find everything wrong with the government. You must also be against CAA and NRC” (4/n)

In a string of tweets, Sharma narrated the entire conversation he had with the driver. According to Sharma’s account, the driver weighed in his opinion while he was having a conversation about the economic situation of India on his phone. Apparently, the driver accosted Sharma stating 6 years of Modi government is not the right barometer to measure the country’s economy and that it was Congress’ mistakes from the 70 years that the Indian economy is in such a bad shape as of now.

The driver then proceeded to brush-up history lessons for Sharma as he claimed that JNU is a “hub of prostitution for Tukde Tukde gang” and that Nehru’s Muslim grandfather converted to Hinduism to fool Indians.

Disconcerted by driver’s assertions, Sharma defensively claimed that his only concern is with the country’s economy which according to him was not doing good.

The conversation then segued into CAA and NRC and while the Ola driver supported the move by the Modi government, Kanav opposed it. Then the argument veered into atrocities on Kashmiri Pandits in Jammu and Kashmir, In a bid to take a moral high ground, Sharma lied through his teeth that he is from Jammu and Kashmir intimately understands the problems faced by Kashmiri Pandits during their exodus.

The Ola driver seems to have assumed Kanav was a Kashmiri Hindu and thus told about him about the brutalities that his family escaped in Kashmir. At this point, after the entire conversation, Kanav told him he was not interested in debating the driver. Thereafter, Kanav tagged Ola along with his ride number, urging Ola to take action against the driver. 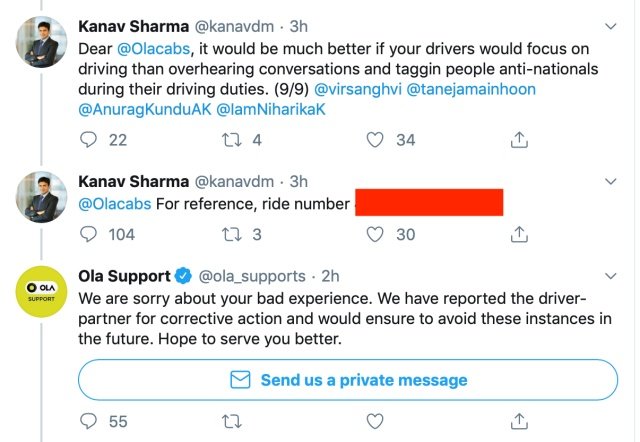 Kanav’s tweets elicited a response from Ola Support who stated that they have reported the driver-partner for corrective action and would ensure to avoid these instances in the future. However, the targeting of Ola driver did not sit well with a score of Twitter denizens who called out Ola cabs to refrain from taking corrective actions against the driver who was simply having a healthy exchange of views with his passenger. In fact, after the matter blew out of proportion, even Kanav backtracked, claiming he had absolutely no intention of getting the driver penalised.