A year ago, A R Rahman was trolled by social media users after Khatija had appeared in an even with him wearing a burqa 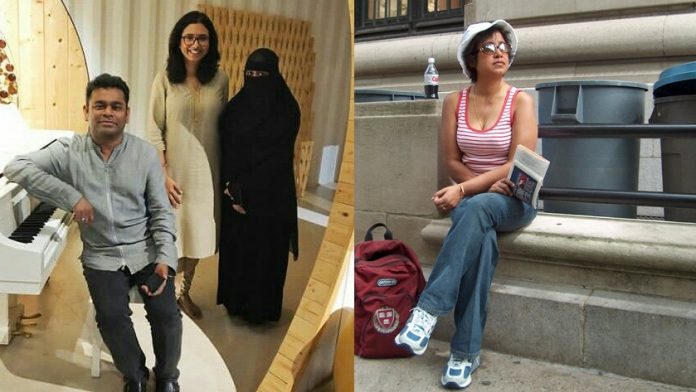 The music composer’s daughter took to the social media site to write that it was her choice to wear what she wants and that she feels empowered by wearing a burqa.

Her post reads: “Been only a year and this topic is in the rounds again..there’s so much happening in the country and all people are concerned about is the piece of attire a woman wants to wear. Wow, I’m quite startled. Every time this topic comes the fire in me rages and makes me want to say a lot of things…Over the last one year, I’ve found a different version of myself which I haven’t seen in so many years. I will not be weak or regret the choices I’ve made in life. I am happy and proud of what I do and thanks to those who have accepted me the way I am. My work will speak, God willing… I don’t wish to say any further”.

“To those of you who feel why I’m even bringing this up and explaining myself, sadly it so happens and one has to speak for oneself, that’s why I’m doing it. Dear Taslima Nasreen, I’m sorry you feel suffocated by my attire. Please get some fresh air, cause I don’t feel suffocated rather I’m proud and empowered for what I stand for. I suggest you google up what true feminism means because it isn’t bashing other women down nor bringing their fathers into the issue. I also don’t recall sending my photos to you for your perusal”.

Khatija Rahman’s strong response came after Taslima Nasreen took to Twitter to share a photo of Khatija and her thoughts on Khatija wearing a burqa. She wrote that she feels suffocated when she looks at Khatija Rahman wearing a burqa. “I absolutely love A R Rahman’s music. But whenever i see his dear daughter, i feel suffocated. It is really depressing to learn that even educated women in a cultural family can get brainwashed very easily,” wrote Taslima on February 11.

This is, however, not the first time Khatija Rahman’s attire has come under fire. A year ago, A R Rahman was trolled by social media users after Khatija had appeared in an even with him wearing a burqa. However, then the composer had explained that the women in his family are free to wear whatever they want.

Will Wuhan Coronavirus finally end the urban legend of the famous healthcare of Kerala?

Coronavirus and the Chinese conundrum: How the virus spread, China’s bio-warfare and deception

No, India is not accepting ‘foreign aid’ to fight Coronavirus pandemic: Debunking misinformation​ spread​ by Suhasini Haider and Shashi Tharoor

Islamists on TikTok refer to coronavirus as NRC of ‘God’, ‘welcome’ the contagion to India

Tablighi Jamaat’s Maulana Saad gets into damage control mode, informs attendees that ‘listening to doctors’ is not against ‘Sharia’

Chinese student from the UK brings coronavirus back to epicentre Wuhan just a week the declaration of the conquer over the outbreak in the...

The student named Zhou had no symptoms but was tested positive on arrival in Beijing and was later transported to Wuhan.
Read more
News Reports

The Dharavi victim is reportedly a resident of Dr Baliga Nagar SRA society that has around 300 flats. All the flats and 90 shops nearby have been sealed.
Read more
News Reports

Real Report, a 'news platform' linked closely to the Congress party, posted a tweet on Thursday claiming that 'thousands' of devotees had gathered across temples in West Bengal on the occasion of Ram Navami.
Read more
News Reports

Madhya Pradesh: FIR registered against cleric for inviting Muslims for Namaz at Mosque amidst Coronavirus lockdown

The Madhya Pradesh police Wednesday have registered an FIR against a Muslim cleric for urging people to gather to offer Namaz at a Mosque in Ujjain, amidst Coronavirus lockdown
Read more

Earlier yesterday, these members of Tablighi Jamaat were found spitting out on road while being transported to quarantine centres
Read more