The joint venture between India’s Ordinance factory and a Russian firm is in response to Ministry of Defence (MoD)’s Request for Information (RFI) for procurement of 6,50,000 assault rifles of 7.62×39 mm calibre under ‘Make in India’ program. 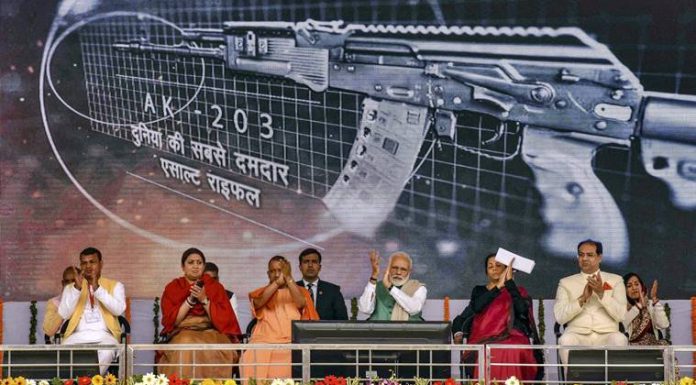 Prime Minister Narendra Modi visited Amethi in Uttar Pradesh on Sunday and launched a Kalashnikov rifle manufacturing facility, the proposal of which was cleared by the NDA government on February 14, 2019.

Ahead of his visit to Amethi, which is Congress president Rahul Gandhi’s home turf, PM Modi said he was “looking forward to being among my sisters and brothers of Amethi today.” This was Modi’s first visit to the constituency of Rahul Gandhi after becoming the Prime Minister.

Eying at the development of Amethi, Centre had cleared a proposal to set up a new plant at Amethi, Uttar Pradesh, for the joint production of 7.47 lakh AK-203 rifles, which is an updated version of the legendary AK-47 rifle. This decision comes after the Narendra Modi government had signed a deal for procuring 72,400 SIG716 advanced assault rifles for the Indian Army’s infantry from the US-based M/s Sig Sauer.

The joint venture is in response to Ministry of Defence (MoD)’s Request for Information (RFI) for procurement of 6,50,000 assault rifles of 7.62×39 mm calibre under ‘Make in India’ program.

The Indo-Russia Rifles Pvt Ltd is a joint venture between India’s Ordinance factory and a Russian firm. Termed a milestone in Indo-Russian cooperation, the Korwa Ordinance Factory will manufacture the latest series of the iconic Kalashnikov rifles. The ordnance factory was set up in Amethi in 2007 itself, but it did not see any major production. During his speech, PM Modi said that production was supposed to start in 2010, but the then government could not even decide what to produce in the factory. He said that promise was for 1500 jobs but only 200 persons got jobs.

Russian president Vladamir Putin had sent a message on the occasion of launching the rifle factory, which was read out by defence minister Nirmala Sitharaman. Putin said that “the new joint venture will manufacture world famous Kalashnikov assault rifles of the newest 200 series and eventually will reach full localization of production. Thus, the Indian defence-industrial sector will have the opportunity to fulfill the needs of national security agencies in this category of small arms, resting upon advanced Russian technologies.”

“One of the most advanced rifles in world AK-203 will be made in Amethi. It will be made by a joint-venture of India and Russia. I express my gratitude to my friend President Vladimir Putin, this venture was made possible in such a short time by his support,” PM Modi said addressing the rally.

Taking a jibe at Rahul Gandhi’s promise to set up mobile phone and other factories in every place where he addresses rallies, Modi said some people keep talking about ‘Made in Ujjain, Made in Jaisalmer’, ‘Made in Baroda’ in their speeches, but nothing is actually done. On the other hand, now made in Amethi Kalashnikov riffles will be available for Indian armed forces. He said that in future, Amethi will be known for the modern rifle factory. Lakhs of rifles will be made from this facility in Amethi, and will strengthen our security forces, PM Modi added.

Apart from this, the Prime Minister also unveiled several development projects in power generation, education, health and manufacturing sectors. These projects will directly benefit the Amethi region, he said. The prime minister added that developmental projects in Amethi were facing several bottlenecks, and those bottlenecks are now being removed. He said that now projects will be operationalised, which will provide employment to people.

Interestingly, under a similar initiative taken by the BJP government, a village in Amethi had gone completely digital with access to over 200 government services at the click of a mouse. But interestingly this initiative has been taken not by the Congress President but by the Union Textiles Minister Smriti Irani who has been instrumental in reducing Rahul’s victory margin in Amethi from some 3.70 lakh votes in 2009 to 1.07 lakh in 2014.

With Modi led NDA Government working relentlessly towards the holistic development of the Nation including areas which are predominantly Congress’ realm, the decreasing Congress admiration in Amethi and Rae Bareli has been evident.

Even today during Modi’s speech, when he had talked about Congress trying to block the Rafale deal, people had started shouting “Rahul Gandhi chor hai”.

Rahul Gandhi, who, for all this while has hardly missed an opportunity to take pot shots at the Prime Minister, had made assertions that in another 10-15 years, Amethi would develop so quickly that when people talk of the city-state of Singapore and California in the United States, they would talk of Amethi in the same breath.

Little did the people then understand that probably, judging by the current scenario, the Congress president was making such attestations solely depending on the development schemes the BJP government has been planning and implementing, not only in Amethi but all across the nation.