Jitan Ram Manjhi teaches lectures of puppet-politics to Nitish Kumar, and many others 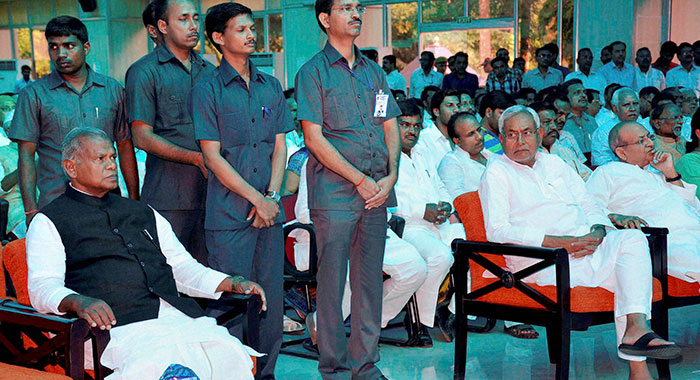 Since 1946 till today, Bihar has seen 23 people as the Chief Minister of the state – which, if documented in the format of the Good, the Bad and the Ugly – will enlist administrators, criminals and puppets. Though, the coronation of Rabri Devi in 1997 formalized the acceptance of the Ugly i.e., puppet leaders on the CM chair, the entry of Jitan Ram Manjhi, the current CM of Bihar, took the ugliness of puppet politics to the next level.

Politics of Bihar and Uttar Pradesh is quite different from the politics of other states of India. While political tactics in other states try to deal with social and economic subjects separately, Bihar and Uttar Pradesh merge both these attributes to weave combinations of new socio-economic dimensions like Mahadalits and Ati-Pichda Dalits. Jitan Ram Manjhi was installed to exploit this catse angle of this socio-economic dimension and replenish the image loss which Nitish Kumar faced after his segregation with BJP in the state.

Jitan Ram Manjhi was never known to be a good administrator. He started his political career from Indian National Congress, moved to Rashtriya Janata Dal and when RJD lost the October 2005 elections, he switched his loyalties to the JDU. Prior to swearing in as the CM of Bihar, Manjhi was already known as a politician with blotted reputation, a leader with terrible thinking and a contestant with poor victory record. During the 2008 food crisis in Bihar, Manjhi, as the Minister of Social Welfare said, “On behalf of the government, we will promote eating rats. There is nothing wrong in eating rats. The way the people eat mutton or chicken, they can also have rats,” and justified it by saying that rats damage lots of food grains, so it should help the crisis. 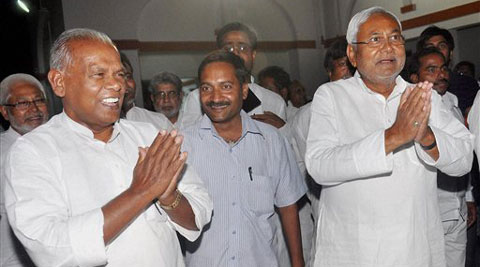 However, even after all these fiascos, he was promoted as the CM of Bihar due to his closeness with the ex-CM and JDU supremo Nitish Kumar, his Mahadalit background – as advertised by all the major media houses1,2,3, and primarily because he was expected to play a puppet role.

What goes around comes around. The close trustee of Nitish Kumar, who grew in ranks within JDU by praising Nitish Kumar, started hitting at all the places where Nitish Kumar was hurt the most.

Very soon after taking the oath of CM, Jitan Manjhi said, “I’m No Rubber Stamp.” Then he wounded the struggling image of JDU by threatening doctors with chopping off their hands for neglecting poor people. By the time JDU would have done some damage control, Manjhi spat venom of casteism by saying, “Upper Caste People are Foreigners.” Sadly for Bihar, a puppet politician who was picked to appease lower castes on the excuses of equality, shamelessly started attacking the upper caste. Manjhi gave the strongest blow to Nitish Kumar by praising Modi for his stand on Pakistan, and praising him again for his benevolent stances.

Nitish Kumar, after being stung by his own creation, has clearly shown signs of anger, desperation and frustrations. On 6 Jan 2015, Jitan Ram Manjhi hit the panic button by asking the Governor Keshari Nath Tripathi to remove Nitish Kumar’s close aides and senior JD(U) leaders Lallan Singh and PK Shahi. Recently, in two separate events, supporters of Nitish Kumar have clashed with the supporters of Jitan Ram Manjhi, and Lalu Yadav has spoken against Manjhi.

Amidst the entire episode of hotchpotch and mumble jumble, two things have suffered the most – the public of Bihar and the concept of bringing equality by giving some additional push to marginalized society.