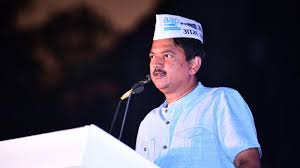 Elvis Gomes, AAP’s CM candidate for the upcoming Goa election doesn’t seem to be able shrug off the ghosts from the past after he was summoned by the Anti-Corruption Bureau yet again for a 30,000 square meters land scam that took place between 2007-11.

The alleged scam dates back to 2007 when Nilkant Halarnkar of the Congress was the Chairman of the Goa Housing Board. Later, Elvis was reportedly the Managing Director and the Joint-Secretary of the same housing board. ACB claims that during that time Halarnkar and Elvis acquired approx 30,000 square meters of land in Margao region for implementation of a housing scheme. The land was identified and in August 2008 NOC was obtained from TCP, Margao.

Then, in September 2009, the Goa Housing Board deposited Rs 21,80,000 as 25 per cent of the cost of land with the EDC. All was well till 2011 when a Vincent Gracias made a single-page application to the MD of the Housing Board requesting them not to acquire land as he along with some more people were the cultivators of the said property. Later it was found that Gracias had no authority over the land.

It is alleged that Gomes under the capacity as the joint secretary of Goa Housing Board granted approval to Gracias’s request without following the protocol of placing the matter before the Secretary for decision and referred back the matter to the MD or himself. If this wasn’t murky enough, the zoning of the land was changed from a settlement zone to a commercial zone in 2010 thereby increasing the value of the land. So in a nutshell the government acquired the land from the existing owners increased its valuation and then gave it back to the owner.

AAP and its sympathizers rather than acknowledging the charges against their CM candidate and ordering an internal inquiry for the same, as has been their practice in the past are now trying to spin the charges against Elvis as being a vendetta by the BJP government.

BJP is now targeting AAP Goa CM candidate Elvis Gomes.Within three days of him declared as CM candidate he has been summoned by ACB.

The truth however is slightly different as it was in February 2016 that an individual had first levelled these charges against the Minister and Elvis. And after a preliminary inquiry, the ACB registered the FIR in June of this year when there was no association between Elvis and AAP. Plus just after a few days of an FIR being filed against him he applied for voluntary retirement. During that time Elvis was IG prisons. Though his resignation wasn’t accepted immediately due to the inquiry being pending against him. His resignation was finally accepted at the end of September.

Also Elvis himself had claimed that he wasn’t attached to the housing board when the incidents occurred, though a letter doing rounds on Social Media suggests otherwise: 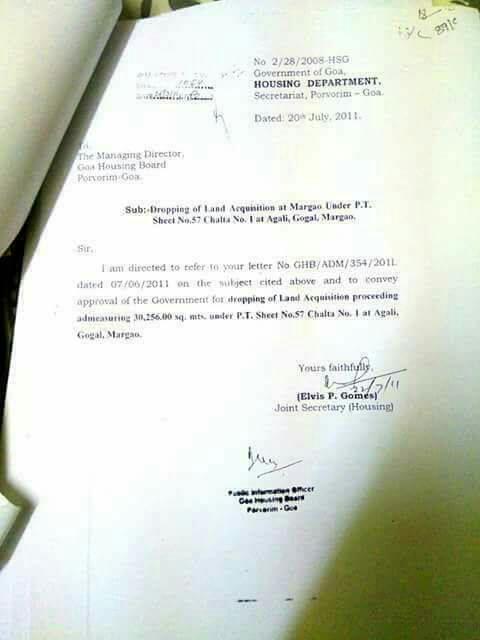 The picture contains the letter allegedly signed by Elvis as the Joint Secretary housing addressed to Elvis as MD wherein he conveyed the government’s intention of dropping the acquisition of probably the same 30,000 square meters of land.

Though one hopes more clarity is provided and Elvis is able to provide an answer to all the suspicious minds  thereby preventing him from having to be inside the same jailhouses of which he was the IG before taking the VRS.