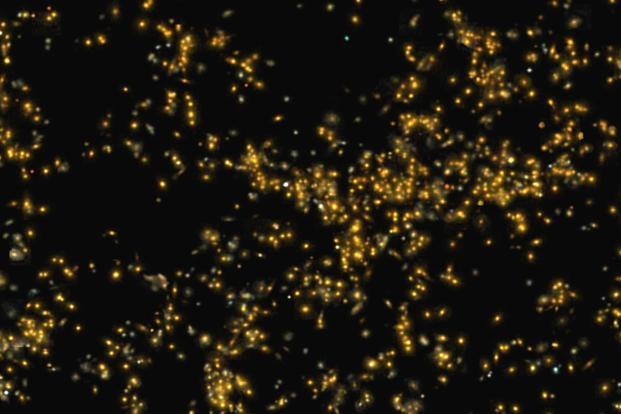 Astronomers associated with the India’s Inter University Centre for Astronomy and Astrophysics (IUCAA) and the Indian Institute of Science Education and Research (IISER) – institutes in Pune – have discovered a supercluster of galaxies in the direction of Pisces constellation.

This discovery made by scientists named Joydeep Bagchi, Shishir Sankhyayan, Prakash Sarkar, Somak Raychaudhury, Joe Jacob, Pratik Dabhade was submitted to the Cornell University as a concise report on 10th July. The scientists have fondly named the discovered supercluster as Saraswati after the Hindu goddess of leaning.

Supercluster of Galaxies are basically a collection of comparatively smaller galaxy clusters which are structures which contain hundred to thousand of galaxies, all of which are bound together by gravity. The Virgo supercluster is made up of about 100 galaxy clusters.

Scientists believe that the Saraswati supercluster, which forms a wall like structure, has a span of about 200 megaparsec. A parsec is a unit of distance which roughly translates into 3.3 light years and when you take a million of those parsecs, it becomes a megaparsec.

Hence the Saraswati supercluster’s span turns out to be roughly about 660 million light years long. To put things into further perspective, it takes about 95,000 years just to cover one light year if you decided to travel on NASA’s Mach 9.68 X-43A hypersonic scramjet which is one of the fastest spacecrafts in the world.

This discovery is also important as it also sheds light on the roles which the initial conditions of the cosmos and dark energy played in the supercluster formation. Dark energy is the force which is primarily responsible for the expansion of the universe.

Plus as stated in the report, discovery of such a supercluster challenges the classical cold dark matter model of Universe’s evolution.  This model states that, small structures of galaxies further congregate into larger structures like galaxy clusters and then superclusters. But the problem is, if that indeed happened, such large formations like superclusters won’t be possible within the current age of the universe.

The detailed account of this whole discovery would be published in the Astrophysical Journal which is the flagship journal of the American Astronomical Society. Interestingly this isn’t the only time one of the scientists associated with the group has made such discovery. Somak Raychaudhury, who is the director of IUCAA had discovered another such supercluster named the Shapley Concentration in 1989, while he was doing his PhD from Cambridge.