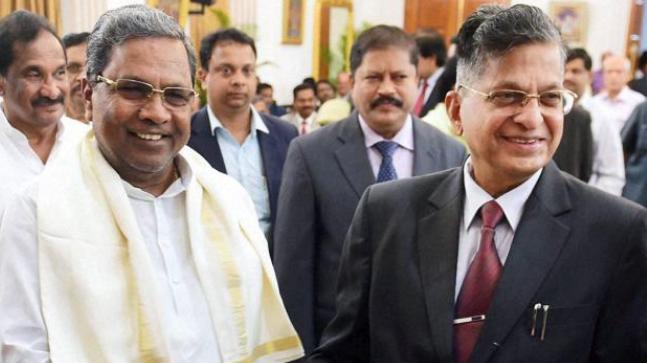 In a shocking lapse of security, Karnataka Lokayukta Justice Vishwanath Shetty was stabbed in his office, following which he has been admitted to the hospital with injuries. The accused has now been taken into custody.

Karnataka Chief Minister Siddaramaiah reaches Bengaluru’s Mallya Hospital to meet Lokayukta Justice Vishwanath Shetty who was stabbed by a man at his office.

One of the eyewitnesses has claimed that the accused stabbed the Lokayukta thrice with a knife, following which the latter fell on the floor.

One person attempted to murder the judge.He hit him 3 times with his knife.The judge fell on the floor. So you can see what kind of security Siddaramaiah govt has provided us. Situation is very bad: Eyewitness Jay Anna on Lokayukta Justice Vishwanath Shetty stabbed in Bengaluru. pic.twitter.com/xTd4fHoy8I

What is even more shocking is that a Congress leader has pinned the blame on Karnataka Lokayukta himself for getting stabbed.

BJP MP Rajeev Chandrasekhar hit out on Congress for the lapse of security.

According to Home Minister of Karnataka Ramalinga Reddy, the accused is a contractor from Tumakuru and he complained to the Lokayukta regarding some tenders and he assaulted the judge when he was alone.

Justice Shetty, who is admitted in ICU right now, is reportedly out of danger now.