Decoding Congress’ ‘give and take’ equation 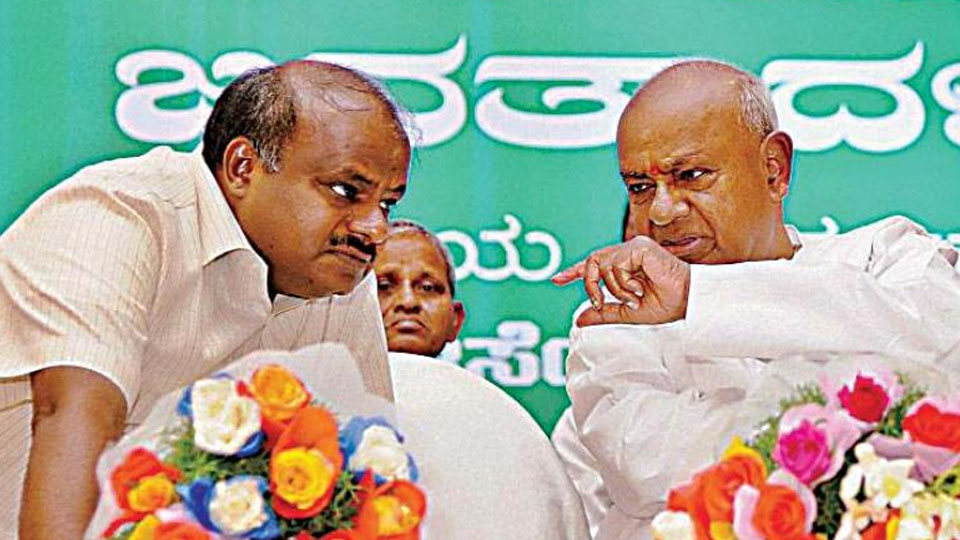 Karnataka Elections had everyone on the edge. The high octane elections finished on a very dramatic note with BJP’s Yeddyurappa staking claim to form the government, Congress challenging it in Court, followed by floor test which concluded in a very emotional speech by Yeddyurappa before quitting as Chief Minister, paving way for Congress and JDS to form the government.

Since it became clear that BJP may come up as a single largest party, the Congress approached Janata Dal (Secular) (JDS) headed by former Prime Minister H. D. Deve Gowda and offered his son, H. D. Kumaraswamy post of the chief minister should JDS choose to join them in a post-poll alliance. JDS, of course, getting a chance to not only be the ‘kingmaker’ but the ‘king’, lapped up the offer. What followed, from the time of forging an alliance to the time of floor test, was allegations and counter allegations of horse-trading. JDS and Congress accusing BJP of subverting the democracy and poaching MLAs to prove majority. In the end, BJP claimed a moral victory and the Congress cheerleaders, who otherwise blame the EVM for losing elections, decided democracy has won.

Amidst all that, Congress leader Mallikarjun Kharge explained how Congress upheld constitutional principles and democracy.

High command will take decision. We, being a national party, supported JD(S) – a regional party, to uphold Constitutional principles & democracy. Keeping everything in mind, there ought to be a ‘give & take’ equation: Mallikarjun Kharge, Congress on #Karnataka cabinet formation pic.twitter.com/mJ5IEc6lMM

It is amusing how if BJP indulges in making offers to join them, it is called ‘horse-trading’ and everyone calls the murder of democracy, but if Congress does the same, it is ‘give and take’ and hailed as a ‘fitting reply to the fascist regime’. Congress, with 78 MLAs, offered support to JDS, with 37 MLAs along with the offer of the chief ministerial post. They ‘gave’ post of chief ministership to H D Kumaraswamy to ‘take’ away one state from the BJP.

This reminds me of 1996 General Elections where Congress led by P V Narasimha Rao, plagued with scams and scandals, lost decisively but then neither of the other political parties had a majority to form a government. BJP was the single largest party with 161 seats but couldn’t cross the halfway mark. Atal Bihari Vajpayee was invited to form the government and asked to prove his majority within two weeks on the floor of the Parliament. While BJP tried to form a post-poll alliance, it could not reach majority. After trying for 13 days, Vajpayee conceded he could not manage more than 200 seats and resigned rather than face the confidence vote.

The Congress, despite being the second largest party, declined to form the government. Instead, offered external support to small regional parties, which were full of internal conflicts, and in an unexpected move, JDS’ H D Deve Gowda was made the Prime Minister of India. In less than two years, Congress withdrew support and the government collapsed.

It is fascinating how the ones who scream about ‘democracy being restored’ every time they win by hook or by crook never pause to once ponder about how the democratic mandate of the people is being shamelessly subverted. Yes, in a democracy majority rules. But if one has to uphold the ethos of democracy, one doesn’t elevate a party that has been booted by the people’s franchise to a ruling position. That is exactly what the Congress party did then, and that is exactly what it is doing now.

We all have read about history repeating itself, but this time around, we are actually witnessing the same. History is indeed repeating itself. One can only hope that Karnataka does not face the same political upheaval India faced for almost two decades after chief minister-elect H D Kumaraswamy’s father, H D Deve Gowda was elected the Prime Minister.

Perhaps for Rahul Gandhi and his band of hollow vessels, democracy can only be restored, when the will of the people can be subverted in order to serve the monarch.