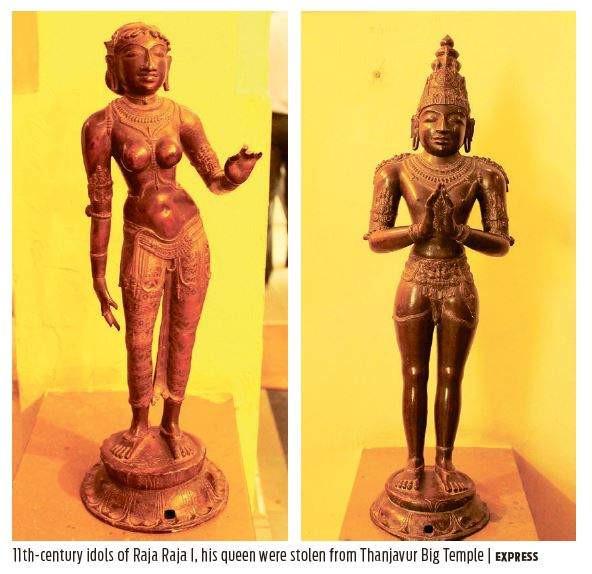 Two 1000-year-old bronze idols of Rajaraja Chola and his wife, Lokamadevi, which were stolen from Brihadeeshwarar temple at Thanjavur over 50 years ago were returned to Tamil Nadu on Thursday. The idols were retrieved from the Calico museum Sarabhai Foundation galleries in Ahmedabad. at Ahmedabad and would be installed at the Temple in the next few days. 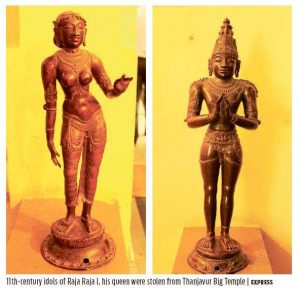 AG Pon Manickavel, Inspector General who leads the idol wing of the Police, said while briefing newspersons in Chennai, “We registered a case (with regard to missing of the two idols from the Big Temple) just three months ago and retrieved it within 90 days. We would be installing these idols at his house.” He added that no one had been booked thus far but assured that the culprits will be arrested soon enough.

According to reports, the two idols are among the 13 presented by Kodumablur king named Poigainatha Kilavan Adhithan Sooryan who helped Raja Raja Chola while he built the temple, 1,000 years ago. The other 11 are said to be missing as well. A Police Officer, who is part of the investigating team said, “Most of the ancient icons were stolen and the officials suppressed the crime without bringing it to the notice of the police. Our investigation revealed that the ancient idols were replaced with non-antique idols.”

The idols are estimated to be worth over Rs. 150 crores. Tanjore Police’s idol wing had registered an FIR against unknown persons in March 2018. Following investigations, the team visited the Calico museum on Tuesday and the figurines were recovered.

We had earlier reported on the magnitude of the menace of Antiquities theft in India and how authorities had failed to preserve and protect India’s cultural heritage. Despite the success achieved by the Police on this particular occasion, smuggling of ancient artefacts remains an organized illegal trade on an industrial scale.