More
HomeEditor's picksFlurry of setbacks for Gandhis in National Herald and why, despite a pliant media,...
Editor's picksFeaturedOpinionsPolitics
Updated: 21 December, 2018

Flurry of setbacks for Gandhis in National Herald and why, despite a pliant media, this could prove historic

At the moment, there is a (literal?) ‘gold rush’ among members of India’s liberal ecosystem to discover the electoral genius of Rahul Gandhi, after the Congress swept one state and crawled close to a majority in two others.

Another day, another big setback to Congress and the Gandhis in the National Herald Case.

There is an increasing amount of evidence that things haven’t exactly gone the way the Dynasty would have liked in cases relating to the National Herald.

Back when the allegations of corruption were first made by Dr Swamy during the UPA years, few believed they were credible. Or perhaps, few had the courage to believe that they were credible. Rajdeep Sardesai famously stood in front of a giant screen with the words “Where is the fraud?” almost as if defending the Dynasty in the “people’s court”.

At the time, many people suggested that the ‘fraud’ here was standing towards the right of the screen, wearing a suit and a pink coloured tie.

But anyway, let’s not get into that.

The matter did keep dragging on and bit by bit, things have consistently gone south for the Gandhis. In 2015, Swamy got his moment in court face to face with the Gandhis and the Gandhis had to seek bail. Shortly before that, sycophants in the pliant media put out “news stories” like this.

Then, the day in court came and the Gandhis did like a short walk on the ground or something. The usual sycophants saw this as a great show of defiance and above all a case of the divine Gandhis making a show of being like ordinary human beings … which would lead to a wave of sympathy that would sweep Modi right out of his chair.

That didn’t happen, but the case kept going on. And so did the setbacks to the Gandhis. The Income Tax Department began proceedings against the company Young Indian and various appeals were filed to halt the process. However, the courts have so far given very little relief to the accused.

In May 2017, Delhi High Court refused to stop proceedings against Young Indian by the Income Tax Department.

Accordingly, the Income Tax Department reassessed and issued a tax demand of Rs 249 crore for the Financial Year 2011-12. Not only did the Courts refuse to halt these proceedings, but ordered Young Indian to deposit Rs 10 crore. 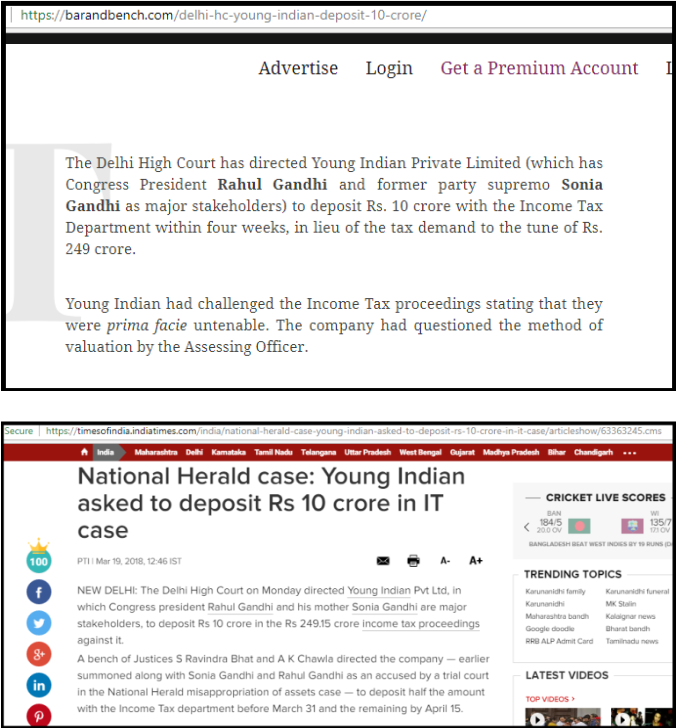 Not surprisingly, these events from March 2018 received the minimum possible news coverage. If anyone was expecting the Indian media to follow up and find out if Young Indian actually deposited 10 crores, they would have been sorely disappointed.

But things kept trending downwards for the Gandhis. In August of this year, the Delhi High Court issued another scathing judgement. 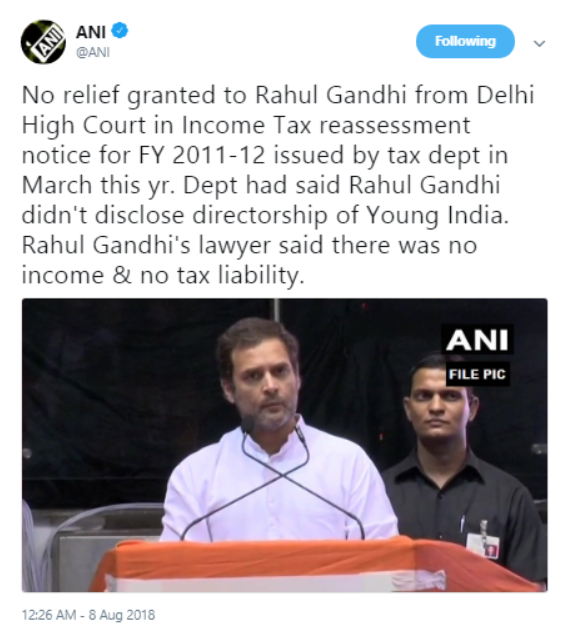 Funnily enough, it turned out that the Gandhis, who have been built up by the liberal ecosystem as heroes of free speech, had wished for the court to issue a gag order on media reports about this case. And the Delhi High Court would have none of that either.

In my humble opinion, the Gandhis need not have bothered to ask the court to issue a gag order on the media. Our “neutral patrakars” have done a good job of gagging themselves in the case already.

Only two weeks ago, the Supreme Court did much the same, refusing to stop tax reassessment proceedings against Sonia and Rahul Gandhi.

This leads up to today’s judgement, with National Herald asked to vacate its premises within 2 weeks. Apparently, the desperate last-ditch attempt to suddenly revive the long dead newspaper could not convince the High Court.

Despite the sparse and overly cautious media reporting, there is no doubt that a clear pattern is emerging. In the last five years, there has hardly been any good news for the Gandhis from the courts in the National Herald matter.

Could we be witnessing history in the making?

In India, we the people are given to a kind of cynicism, a sense that our legal system can never catch up with the high and mighty. But in this case, the wheels have been turning. Ever so slowly, but there is no doubt that the wheels are turning in one direction only.

Decades ago, a case filed by one nearly unknown politician by the name Raj Narain changed the course of Indian political history. Indira Gandhi had to impose the Emergency, India nearly lost its democracy and then the Congress was ousted from power for the first time ever in the General Elections of 1977.

At the moment, there is a (literal?) ‘gold rush’ among members of India’s liberal ecosystem to discover the electoral genius of Rahul Gandhi, after the Congress swept one state and crawled close to a majority in two others. The going assumption in Lutyens Delhi is that ‘Achche Din’ is coming. I hope they are also keeping an eye on the National Herald case, where the wheel seems to be turning in quite the opposite direction. And above all, I hope that India’s democracy will not come to the brink as it did in 1975 when the Gandhis lost a court case.

OpIndia's Nirwa Mehta travels to the hinterlands of Gujarat to speak to the tribals who were lured to convert to Islam and how they were brainwashed to hate Hinduism and inspired to take up Jihad.
News Reports

Madhya Pradesh: Hindus in Ratlam put up ‘on sale’ signs outside their houses fearing persecution from Muslims, Govt takes cognisance

Kidnapped toddlers, then murdered them: The story of serial killer sisters Renuka Shinde and Seema Gavit

Meet Savitri Devi, UP Chief Minister Yogi Adityanath’s mother and how she coped with her son becoming a monk

From ‘theek hai’ to condolence tweet twice deleted: When Congress leaders’ gaffes were caught on camera

Video from Flipkart, music from ‘Pushpa’, photos from Bangladesh: Congress running out of luck, power and content

Meet Savitri Devi, UP Chief Minister Yogi Adityanath’s mother and how she coped with her son becoming a monk

Abusive phone call controversy: BharatPe founder Ashneer Grover to be on leave for ‘best interests of the company’

Madhya Pradesh: Hindus in Ratlam put up ‘on sale’ signs outside their houses fearing persecution from Muslims, Govt takes cognisance

4-yr-old Swarnav tracked down by Pune Police, was kidnapped last week from Balewadi