Citizenship Amendment Bill: A necessity to correct a historical wrong

The apprehensions raised about the bill are misplaced The citizenship amendment bill, tabled in the 2016, and later discussed and deliberated in a joint parliamentary committee, has been a bone of contention for some time now. Recently it has been passed in the lower house of the parliament, and this has caused a furore, especially in the North-eastern part of the country. But before choosing a side on this matter, we must first try to understand what this bill says.

At the time of partition of India, on the Western front there was fair amount of population exchange, especially in Punjab, due to the efforts of people like Master Tara Singh etc. But the on the Eastern front the situation was completely opposite. In united Bengal, and Sylhet district of Assam, which fell in East Pakistan, the Hindus formed a sizeable chunk (around 46%). Due to the efforts of Congress in convincing people that the exercise is temporary, and will be altered soon, there was very little migration. As a result, in East Pakistan the proportion of Hindus stood at 22% in 1951, as compared to 28% in 1941.

But there were widespread atrocities committed against them right from the inception after independence. As a result of that, Hindus kept on moving to India, leaving behind everything they had. The Indian government though stayed oblivious to it, and hardly arranged for relief and rehabilitation to these refugees. Instead what was offered was the non-starter Nehru-Liaquat Ali Khan pact, which added insult to injury.

A major chunk of these refugees had to be absorbed by Assam, Tripura and West Bengal. Even after creation of Bangladesh, the situation has hardly been any better as regards the atrocities on minorities, the current percentage dwindling to 8.96 in 2011. It is in this context that the CAB wishes to address this problem comprehensively, and the Indian state wishes to make amends for the lapses during the last 70 years. Indeed, the whole of India has a duty to house the victims of partition, on whose blood our freedom was achieved.

Along with this, another issue has come to light for a long time. It is the demographic invasion that has been going on in the states neighbouring Bangladesh. It has taken a dangerous form especially in Assam and West Bengal. The percentage of Muslims has continuously increased in Assam, and they are already in majority in quite a few districts of lower Assam. Part of it is due to the Muslim peasants who were brought in for the purpose of increasing farming in Assam. The govt led by PM Saadulla of Muslim League played a big role in this process. But along with that, continuous infiltration across the border has been going on, increasing the proportion of Muslims to 34% in 2011, from 24% in 1951.

The effects are especially evident in the districts like Nagaon, Barpeta, Kamrup etc in Assam. This has caused a great deal of turmoil, both culturally and politically. Lands of Xatras (Vashnab monasteries), as well as lands of Kaziranga National park and other reserved forests have been taken over by illegal immigrants. In the political front, within a span of a decade, AIUDF has become a force to reckon with, led by the perfume baron Badruddin Ajmal. It must be stated that the political representation of Hindu Bengalis has remained the same, from outside the Barak valley. In fact, their representation has decreased due to decrease in representation from Barak valley itself.

So, the source of threat to the culture and politics of Assam is amply clear. But unfortunately, some leaders and intellectuals of Assam, in collusion with the media, seems to be painting a completely different picture. Their primary grudge is directed towards the Bengali Hindus, which has even led to events like the killings in Tinsukia. Statements from ULFA leaders in this regard are also to be noted in this regard. Though their collusion with ISI has been out in the open for a long time. In fact, the children of many of these ULFA leaders have grown up with a Bengali speaking Muslim identity.

But on the other side, the Bengalis residing in Brahmaputra valley are fluent in Assamese. Many of them study in Assamese medium schools. In fact, the children in the families of the people killed in Sadia Dhola also studied in Assamese medium. They participate in Bihu celebrations like any other Assamese. Being from the same tradition of Shakta and Vaishavite worship, they have deep reverence of Maa Kamakhya as well as Shrimanta Sankardeva. And this is nothing new in the history of Assam. Over centuries Bengalis have moved to Assam, and got integrated into the Assamese society. The Guru of King Shiva Sinha, Mahanta Krishnaram Bhattacharya moved from Nadia. His descendants became a part of the Assamese society, and came to be known as Parvatia Gosains.

Also, the threat of losing control of politics of Assam to Bengali Hindus is also unfounded. One specific example that needs to be mentioned here is that of Santosh Mohan Dev, a towering leader of the Congress from the Barak valley. From a strongly connected political family, he became a central minister and a national leader of Congress. Yet, he never tried to be the Chief Minister of his home state Assam, which he clearly could have with his strong network at the central level, which was far greater than the Assamese leaders of the Congress at his prime. So clearly the source of threat to indigenous culture and language of Assam is indeed lying on the other side. Indeed, as during the time of Sylhet referendum, the East Pakistanis cajoled ‘We have taken Sylhet via referendum, we will take Assam via power of the stick’, we are experiencing this nightmare turn into reality in front of our eyes.

The scene in Bengal is no better. Especially the role of the ruling party of West Bengal, which tries to present itself as the sole saviour of the Bengalis, is abysmally murky. The amendments suggested by them to the Citizenship Bill, especially like leaving out Bangladesh from the purview of it, or keeping Muslims of Afghanistan, Pakistan and Bangladesh outside the ambit of illegal migrants, suggests their deep-rooted connivance with the anti-Hindu forces.

The recent activities of the banned organisation Jamaat-ul-Mujahideen Bangladesh in the bordering areas of West Bengal, and their establishments of cells in districts of WB also point towards some bigger conspiracy that is being hatched. At the time of partition, apart from Murshidabad, every other district in West Bengal was Hindu majority. According to the last census, Malda and Uttar Dinajpur have also become Muslim majority. All these districts are bordering Bangladesh. Also, the demographics of Birbhum, North and South 24 Parganas, Nadia, Howrah, Coochbehar, etc have massively changed. If one looks at the demographic shift at the blocks nearing the border, one would be in for a shock.

The political influence of the Muslim community, who now form 27% of the population (2011), has increased considerably. Since the days of the Calcutta killings, this is the first time that a person from the minority community has donned the chair of the mayor of Kolkata. The narrative being built by the media, and the intellectuals, hand in hand with the political parties, in equating Jibananda Das (a pioneering Bengali poet from across the border, who had to shift to WB after partition) with Jasimuddin (another Bengali poet, involved with the Muslim league, who stayed on in Pakistan) as regards to acceptance of refugees. The illegal immigration, aided and abetted by the successive governments, to build up their vote-bank, is now looking for legal sanction from the Parliament itself.

Unfortunately, the nation had remained oblivious to the situation building up on its Eastern front. It might have already been too late, but at least an attempt at redemption is being attempted to still spoil the dreams of Maulana Bhasani, who spoke of a unified Assam, Tripura and Bengal as greater Bangladesh, from realisation. As we try to save our lands from destruction, we must first try to put our house in order. And therefore, we must recognise the forces from within, which are trying to bring in the necessary disruptions, which can spoil this last exercises for redemption, so as to ensure that our land and culture is perennially annihilated.

English rendering of an article written by Rudradeb originally published in Bangodesh.com 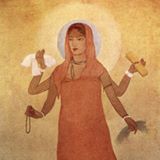 Bengali, academic, who takes deep interest in preservation of his motherland.