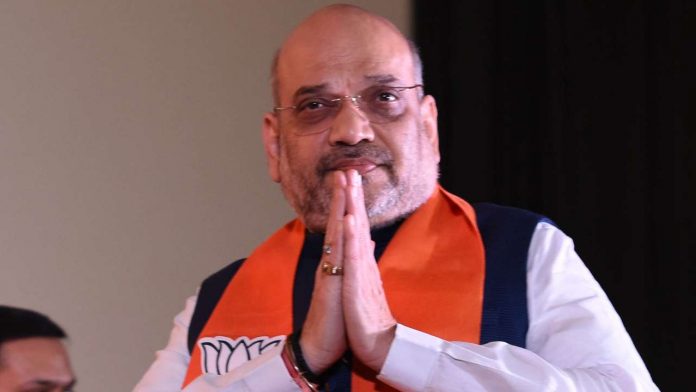 Coming down heavily on Andhra Pradesh Chief Minister Chandrababu Naidu, BJP President Amit Shah said that the doors of the NDA alliance have closed the door for him forever. Shah made the remarks while addressing a public meeting after flagging off a bus yatra of State BJP President Kanna Laxminarayana at Palasa town in Srikakulam district.

“I want to assure the people of Andhra Pradesh and BJP workers that we have closed NDA’s doors forever for Naidu. He will not find a place in the alliance,” Shah said. Shah accused Naidu of switching loyalties to stay in power. He said that he has started off as a Congress MLA, then he joined N T Rama Rao’s Telugu Desam Party (TDP) when Congress lost to enjoy power but later betrayed him. “He later joined the TDP formed by N.T. Rama Rao (NTR) and enjoyed power. When he got the opportunity, he betrayed NTR who had promoted him, captured power and the entire party,” said the BJP President.

Calling Naidu a “U-turn Chief Minister”, Shah recalled how Naidu had joined the NDA when Atal Bihari Vajpayee became the PM and later left it as well after the NDA government fell. “But at the opportune moment, he stabbed NTR in the back and stole his party. When Atal Bihari Vajpayee became the prime minister, Naidu joined the NDA, but left it soon after the NDA government fell in 2004,” Shah added.

Shah further said, “Chandrababu Naidu kept wandering for 10 years. When he realised that he can’t come to power on his own, he joined hands with Modiji and NDA. Now he has left NDA and making allegations against Modiji.”

BJP President Amit Shah in Vizianagaram,Andhra Pradesh: When he (N Chandrababu Naidu) felt that people are angry with the way he is running the govt & with his efforts to try to make his son the CM. To try to gain sympathy, he put the entire blame on BJP&distanced himself from us pic.twitter.com/KJUDQB5VKJ

He accused Naidu of putting the blame on BJP government to gain sympathy when he felt that the people were angry with the way he was running the government and was trying to make his son the CM.