Throughout the video, Pakistan PM Imran Khan has not once condemned the dastardly attack on the Indian soldiers in Pulwama that claimed 44 lives. Instead, Pakistan PM appeared to emphasise more on Pakistan being the biggest victim of terrorism. 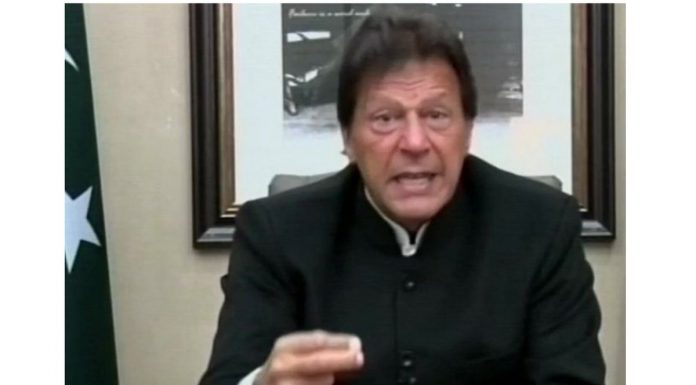 In what appears as a doctored pre-recorded video message by the Pakistani PM Imran Khan, the terror state’s PM has indulged in mouthing off hackneyed assertions that Pakistan itself has been a victim of Terrorism and that he ‘guarantees’ action against the perpetrators if any actionable evidence is shared with his government. There was not a shred of condemnation either expressed or felt in Imran Khan’s demeanour in the video.

Open to probe in #PulwamaAttack, but will retaliate if #India attacks: #Pakistan PM @ImranKhanPTI https://t.co/JPpNqISLae pic.twitter.com/w0y24axtvN

The message seems not only pre-recorded but also heavily censored in many instances. Khan started with alleging that Pakistan was busy preparing for Saudi crown prince’s visit for his investment conference and that it was not in Pakistan’s interest to orchestrate such an attack and sabotage the crucial conference.

At around 1:14 in the video, it can be clearly observed that the Pak PM Imran Khan while prattling on about his country being the biggest victim of terrorism spoke something that was unpalatable to his handlers in Pakistan Army and ISI and hence was abruptly edited out there. Imran Khan claimed that 70000 Pakistanis have lost lives due to terrorism in Pakistan and was about to make a leading point to it when the video was cut.

Then he waffles about how it is not in the interest of Pakistan to have a strained relationship with India. He further pushed the blame of the tragedy as indigenous Kashmir upheaval. Just when Khan agrees to have an investigation to determine any Pakistani’s involvement in the attack, at 2:24 the video is abruptly cut, connecting it to a point where Imran Khan trots out the familiar stance of presenting an actionable evidence to Pakistan and he will ensure a ‘guaranteed’ action against the perpetrators.

Again at 2:55, Imran Khan claims that whenever Pakistan approaches India for talks, India keeps a precondition of talking about terrorism first, the video is edited right there, continuing with Imran Khan’s approval that Pakistan too wants to end the terrorism. The video is censored again at 3:20 when Pak PM threatens India of retaliation if it attacks Pakistan, “Pak won’t just think about retaliating but it will retaliate,” he said.

Towards the end from 4:00 onwards, the video appears somewhat unedited as Pak PM Imran Khan continues to threaten India with dire consequences if it decides to attack Pakistan. Foreshadowing disaster, Imran alleges that starting a war is easy but ending it is very difficult and catastrophic.

Throughout the video, Pakistan PM Imran Khan has not once condemned the dastardly attack on the Indian soldiers in Pulwama that claimed 44 lives. Instead, Pakistan PM appeared to emphasise more on Pakistan being the biggest victim of terrorism.