‘Activist’ who signed mercy petition for Yakub Memon now bats for illegal immigrants, moves petition for CJI to recuse himself from case

In the name of conditions of detention camps, the activists want to prevent deportation of illegal immigrants to their origin countries. 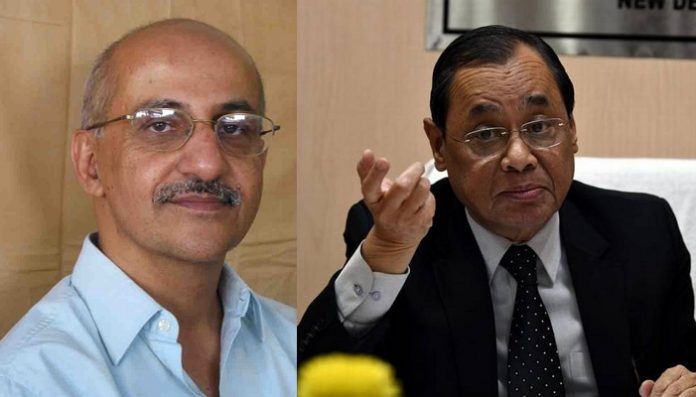 Activist Harsh Mander, the obsessive Ishrat Jahan apologist, has filed a petition in the Supreme Court seeking recusal of Chief Justice of India Ranjan Gogoi from hearing a case relating to the condition of detention camps and deportation of illegal immigrants from Assam.

The Court will hear the matter at 2 PM.

Harsh Mander had originally filed a petition on the conditions of illegal immigrants caught and kept in detention centres in Assam, most of whom are Bangladeshis, and later the court had expanded it to examine the status of deportation of the foreigners. In a petition filed through Prashant Bhushan, Harsh Mandar had alleged that persons declared as foreigners by the Foreigners Tribunals were kept in inhuman conditions in the detention camps in Assam. The petition had argued that keeping illegal immigrants in camps violates the articles 14 and 21 of the constitution.

A large number of people are kept in the camps even after the expiry of their jail term awarded by the Tribunal, as there is no formal agreement between India and Bangladesh for sending back the illegal Bangladeshis caught in India, and they can’t be released in India as they will become untraceable. For this reason, the apex court had included the matter of deportation in the case, so that the matter can be resolved.

But now the portioner had objected to CJI Ranjan Gogoi hearing the case, alleging that the CJI has “through his actions proved that he is interested in the repatriation of the illegal immigrants/foreigners and is using the petition to ensure that the State of Assam commits mass deportation of alleged foreigners”.

Solicitor General Tushar Mehta has strongly objected to the petition, calling it scandalous.

If the detainees are released from camps in the name of inhuman conditions but not deported, they will have to be accommodated in the society, which will defeat the very purpose of the mechanism of detection of deportation of illegal immigrants from India. The court will hear the petition at 2 PM today.

Harsh Mander had recently written a shoddy article that thanking Jinnah. In the article, the activist Harsh Mander writes about the ‘political marginalisation’ of Muslims. This is strikingly similar to one of the key reasons cited by Jinnah for a separate country. This attracted the attention of Twitter users. Some of them tacitly approved the comment, while others opposed it.

He was also a part of the liberal-secular ecosystem that signed a mercy petition for Yakub Memon and was instrumental in the formulation of the Communal Violence Bill that deemed all Muslims as the victims and Hindus are the aggressors should communal violence take place.