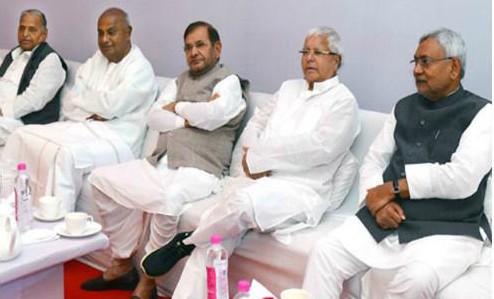 This week finally saw the official announcement of the merger of various factions of the erstwhile Janata Dal viz., Janata Dal (United), Rasthriya Janata Dal, Samajwadi Party, Janata Dal (Socialist), Indian National Lok Dal (INLD) and Samajwadi Janata Party (SJP) into a new Parivar, whose identity is not yet known. A Committee was announced which has the onus of finding a new name, flag and a symbol for the new entity. More information about this entity can be read here.

Let us try to understand the dynamics behind this merger. That the new entity will be filled with differences and big egos is a given. However, politically, who are the winners in this merger? How will the internal politics play out?

Janata Dal (Secular): Deve Gowda’s JDS is a waning force in Karnataka. With the old man in his last term as an MP, the responsibility in the Southern state will eventually move to his son H D Kumaraswamy. JDS itself is in a survival mode in the state. With influence only in the southern part of Karnataka, it will be a success if the party holds on in its bastion. None of the parivar’s North Indian leaders have any political sway in the minds of Kannadigas. So, as part of this merger, the number of incremental votes JDS will get due to the merger is: ZERO. In the same breath, number of incremental excited voters who would vote for Mulayam or Nitish, because Deve Gowda is part of the new entity: ZERO. In effect, this merger is a matter of no-gain, no-loss for JDS, in the medium term.

Indian National Lok Dal (INLD): With the Haryana assembly elections just over, where the party won only 19 of the 90 seats, there are no big stakes right now. The party cannot make a huge hue and cry on the national level too, as their 2 seats in Lok Sabha does not give them any leverage. With no immediate challenges or risks involved, what better way to be in news? INLD seems to have decided to play along for now and see how the experiment pans out. INLD don’t seem to have much sway over Jats in Western UP too, who recently deserted their all time favourite Ajit Singh.

Samajwadi Party (SP): With the anointment of Mulayam Singh Yadav as the Head of the new party, SP has wielded its influence within the group. This is also a tacit acceptance that UP is the critical state and SP will call the shots in the state. There were also reports that SP was skeptical about this merger, as they did not see the benefits from it. I share their skepticism and am wondering how this helps SP in 2017. SP already has influence in Muslim-Yadav communities. None of the other partners have any influence in UP – with the exception of, may be, Lalu in Eastern UP.

In the meantime, SP has also launched “Mission 2017” with the aim to winning UP assembly again. How the merger will impact the mission remains to be seen.

Janata Dal (United) and Rashtriya Janata Dal (RJD): The new parivar will face its first big test in the Bihar assembly elections and the key players there will be Nitish Kumar and Lalu Yadav. Whats in the new party for Lalu and Nitish? Lalu, for one, has already announced that his son will take over the reigns from him. Reigns of what – RJD? or Bihar unit of the new parivar?  With the merger, RJD will cease to exist and Nitish will be the boss of Bihar unit. The only calculation of Lalu seems to be to get to power in Bihar and the dynamics can be worked out later. However, with the merger, Lalu had to swallow his ego and accept that Nitish is the bigger fish in Bihar.

Nitish seems to be winner of this merger. He has formed a coalition that can counter BJP’s might and if Congress joins them in some sort of pre-poll alliance, NDA will have a tough fight in its hands. If the parivar wins, Nitish will be “King of Parivar” and the SP government in UP will also get a shot in its arm. Lalu’s future will then depend on number of candidates from his camp who manage to win. But, if BJP gains wins big or gains absolute majority, its curtains to Nitish Kumar’s political career and Lalu’s camp may live to fight another day. It is also certain that UP will face the repercussions, more than in the pre-merger scenario. Mulayam will have to bear the blame of the defeat, despite his limited influence in Bihar. Why did he put himself in this situation? Is the group confident of doing well in Bihar?

All one can say is that, Bihar is where most action will be later this year. Nitish has won the first round amongst his partners and now needs to win the war against Amit Shah. With PM Modi changing the grammar of elections with “development” as the prime agenda, is the parivar ready to counter him on this turf. Or will they go back to the Mandal politics of 90s. Or will we see a new grammar written in the coming days?