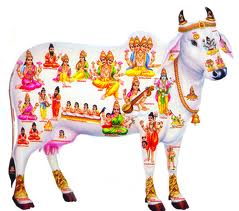 Osho has been one of the most controversial spiritual gurus from India. Among many others, one of the controversies surrounding him was his title of ‘Bhagwan Shree Rajneesh’.  Bhagwan literally means the blessed one or the divine soul but in India, it is also very commonly used to refer to God. The fact that a living human being can term himself God is preposterous and unacceptable to many humble and simple living Indians.

Why would anybody call himself God? To decipher this and to make a fair judgement on Osho’s controversial title, one really needs to understand what the term ‘God’ means in different philosophies. Is there a God? If yes, then who or what is God? Also, what is our individual identity in relation to this God?  Another question that follows – if there is a God, then how many Gods are there? Hindus are known to believe in 33 crore (330 million) Gods – which means roughly, India has one God for one human being in the United States! Is God one or are Gods in millions?

The varied answers to these different questions throw light on the nuances between different philosophies within India and how they contrast with each other. As we have already seen in the previous articles of this series, where most Indian thought agrees is that life is circular and we are in a continuous birth-death cycle. Our goal is self-realization and to break away from the illusory circle of life. But the place where these philosophies differ is in the answer to two key questions – who am I, and what is my relation to God if one exists in the first place. Let us explore these answers through the lens of some of the major Indian philosophies – Jainism, Buddhism, and a few major strands of Hinduism.

While Jainism and Hinduism have a very similar idea of who I am, Buddhism differs slightly in its understanding of an individual. This understanding can be illustrated as below: 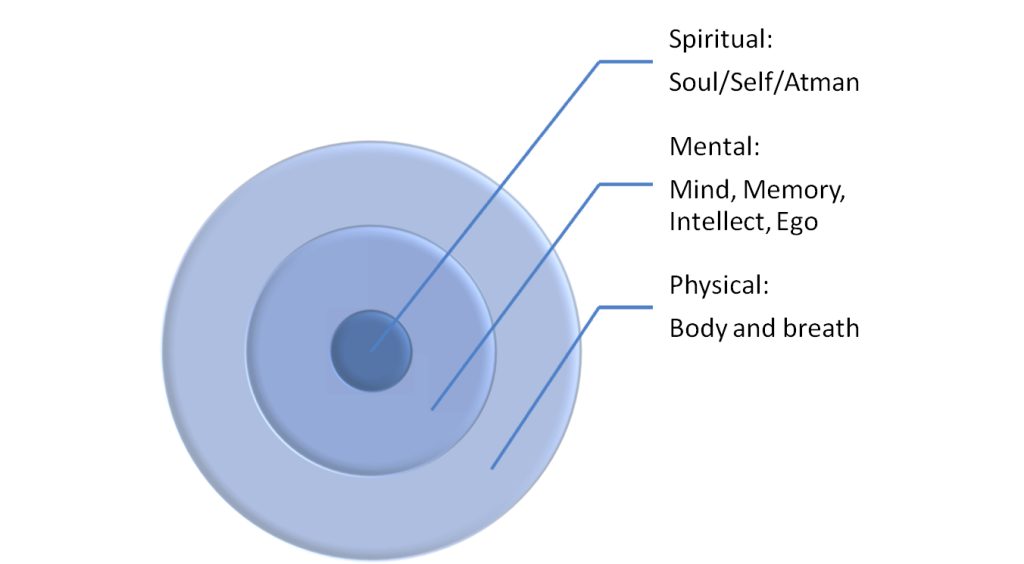 Most Jains and Hindus believe that our existence is composed of multiple layers or sheaths. The outermost layer of our existence is the gross body, followed by the subtler breath followed by the mental sheath involving mind, memory, intellect and ego. This is also the idea behind the popular Panchakosha (5 sheaths) meditation. But beyond all of them and at the very core lies the Atman. It is this Atman which transmigrates into another body along with the mind after death, leading to the infinite cycle of birth and death that we spoke of in our first article. A deep introspection into who am I will lead us to this inner source of pure bliss and joy. Self-realization is nothing but realizing the Atman.

The Buddhist version of who am I is slightly different. Some schools in Buddhism believe in the concept of annata or anatman, which believes that there is nothing called the soul. What really transmigrate are the elements of the mental sheath, but there is nothing like Atman. A deep introspection into who I am will lead to nothingness. Self-realization is the realization of nothingness, which once attained will lead to the end of the life-death cycle. 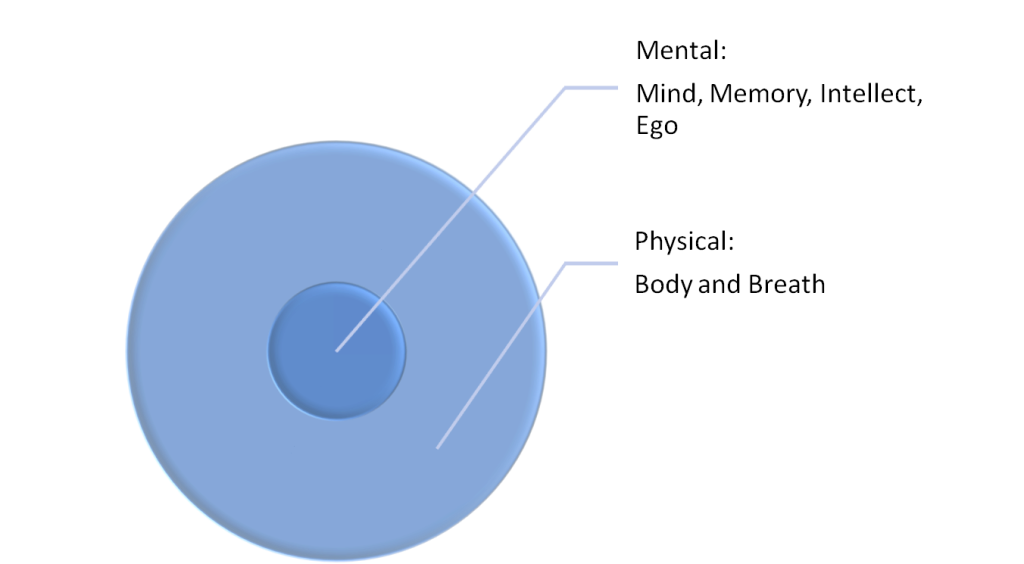 Is there a God? What is my relationship with this God?

According to Advaita school, we all have an Atman inside of us. But at the level of the Atman, all the souls in the Universe are connected and this substratum of the Universe is called ‘Parm-Atman’ (Universal Soul) which is loosely translated in English as God. A frequent analogy used to explain the relationship between man and God is that of a wave in an ocean. Each wave has the same properties as the ocean but it may start believing it is separate from the ocean if it is unable to perceive its true identity. Similarly, the Atman is one with the Parmatman but we may think we are separate because of the sheaths around us (physical and mental). Once the sheaths are transcended, the wave attains unity with the ocean and the Atman unifies with the Parmatman. So, there is one God which is in all of us, and at our deepest essence, we are God. Realizing this truth is our very goal. 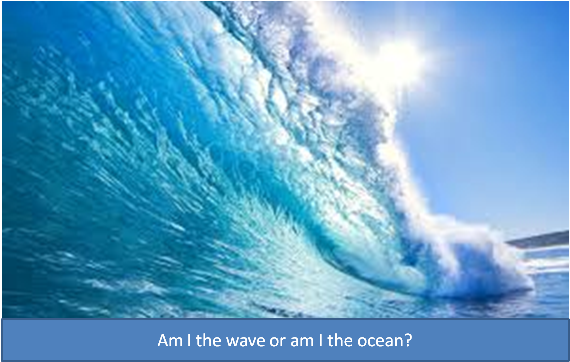 In the Dvaita school however, it is emphasized that Atman and Parmatman are different, and self-realization only takes us closer to the Parmatman. Thus, a wave can never really be the ocean.

Jainism on the other hand states that while we all have an individual soul which is the embodiment of perfection, but there is nothing beyond these souls which strings the entire Universe together. Neither is there any other entity like the Parmatman outside of us. Hence, it is atheistic from the perspective of a Universal God or Universal truth. A good representation of this is the story of 5 blind men describing an elephant based on what part of its body they are touching and describing. For the man touching his ear, the elephant is like a fan, while for the one touching its tail, it is like a rope. Similarly, Jainism believes that each person has his own truth and there is no Universal truth popularly known as the philosophy of anekantavada. Buddhism, on the other hand, is somewhere between Hinduism and Jainism on the theism spectrum. It doesn’t accept or deny the presence of a universal connection between beings, and remains rather indifferent to the question. Hence, it is an agnostic philosophy.

It might seem extraordinary to many that atheism and agnosticism are so deeply integral to Indian thought. The more shocking fact is that people who regularly and devotedly visit temples and monasteries may be atheists in their belief system. But, this wouldn’t surprise the one who sees that the eventual purpose of everything including ‘God’ and religion is to attain the perfection that lies at the core of the circle – right within us. It is being centred in self-realization that is the ultimate bliss in Indian thought. And believing in God is not a pre-requisite to attaining this peaceful state. In fact, there can be many ways to reach this inner bliss. Hence, it really doesn’t matter if you are atheistic, agnostic, monotheist or polytheist till your belief is helping you enhance your understanding of yourself and keeping you at peace. There are infinite paths to perfection and one can choose to believe in any of them.

If this understanding is kept in mind, one would not be surprised even at the idea of the hundreds of forms of God that many Indians believe in. Each of these forms represents a different element of the inner perfection. While Shiva represents the power of inner transformation of negative to positive, Vishnu characterizes the human potential to maintain inner peace, and Shakti represents the balance between valour of a warrior and tender love of the mother. Each of us might relate to different aspects of the Divine and can focus on the aspect or the divine form which appeals to us the most. Hence each one of us is free to choose his/her favourite God also called as the Ishta-Devta (your personal God) and focus on those qualities to eventually lead to a deep blossoming.

Since the Gods are representative of the characteristics of inner perfection, it is not surprising then that in India people believe in millions of Gods. But how do we believe in exactly 33 crore Gods? While there are many stories which might explain this, one of the stories behind 33 crore Gods goes as such: In Vedic texts, it is mentioned that there are primarily ’33 Koti’ Gods. Koti has 2 meanings – Supreme and crore. While the texts might have meant 33 Supreme Gods (including elements of nature and the abstract aspects of the self), they have been lost in translation and many Indians since then believe that Hinduism has 33 crore Gods. What we all believe to be true might just be a myth after all!

But, whether we have 33 Gods or 33 crore Gods, the message from some popular Indian philosophies is that if the real number of Gods in the Universe were ever to be represented, even 33 crore would fall short of the number. Because the real essence of God is what lies within you and me. From the perspective of many strands of Indian philosophy, each and everyone here is nothing but God. Hence the popular term ‘Aham Brahmasmi (I am that)’.

Since each one of us can attain the ‘God’ state by becoming self-realized and many people viewed Osho as having attained this state, is it alright for Osho to use the title ‘Bhagwaan’? I leave it up to you, the reader, to form your own opinion. I would just like to leave you with the lines of one of my favourite songs that well summarizes Indian thought on this matter: Mann se Raavan jo nikaale Ram uske mann me hai.