Bhak Stops Here: The news that made news – January 2016 The paradox that ‘if media has not reported the issue, how did you read it?’ often remains unanswered due to the incorrect method of approaching the issue. We know about most incidents because media reports it in one or the other form. The paradox arises primarily because we try to deal with it in a single dimension — if the news was published, why did people not read it? The speed at which social media and media is growing and encroaching on our personal and public life, a normal news reader needs to analyze any kind of news in more than one dimension, like how much impact did a news make, what was the criticality of a news, how much space did a news occupy in mainstream media and social media.

To avoid lots of subjectivity and time spent, I tried to bucket some of the recent events in “Criticality of News” and its “Amplification on Media and the Social Media”. In my model, I have used two hypothesis

For now, I could identify and tabulate following recent events and tried to put dimensions on them. 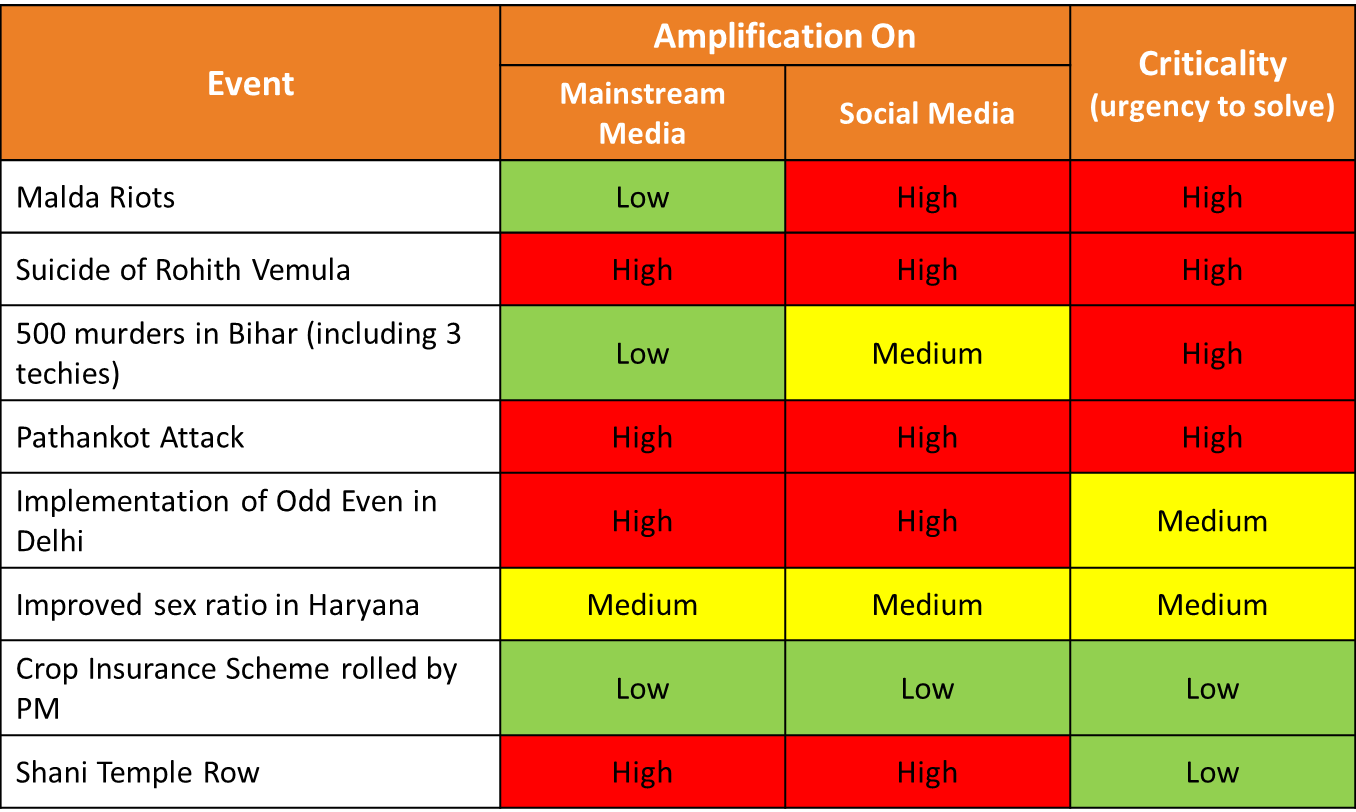 A mob of 2.5 lakh (some reports suggest a conservative figure of 30000) Muslims who had come together under the banner of Anjuman Ahle Sunnatul Jamat (ASJ), went berserk in Malda, West Bengal on Sunday, 3 January 2016. They attacked and vandalised Kaliachak Police station, block development office and public property. Several vehicles were set ablaze and over 30 persons including police officers were injured. According to reports, besides attacking police stations, vehicles and cops, Shani-temple, Durga Temple and other Hindu temples were also attacked at Baliadanga, a residential area behind the police station and other places. Around 25 Hindu houses and shops were also ransacked.

The news, despite involving huge masses with political and communal distinctness, was not emphatically picked by the mainstream media till 6th of January. Social media actively chased the news. Based on the political inclinations of people, Malda Riots was discussed, debated, amplified and spun by them.

With so many people involved, the communal disturbances in Malda were critical. A riot-like situation always deserves more attention, even more so when the number of people involved is so high. We have earlier seen Indian media give non-stop coverage to riots, but not this time.

2. The Suicide of Rohith Vemula:

A PhD scholar from the Hyderabad University jolted the nation by hanging himself to death 15 days after he was expelled from his hostel. His suicide involved numerous facets — Dalit angle, non-Dalit angle, college politics, ABVP bullying, betrayal by SFI, anti-nationalism debates, etc.

His suicide news echoed loudly on media and social media. It was so impactful that politicians from all across the nation visited Hyderabad and participated in students protest.

But the inspite of the multiple facets, the most talked about dimensions were the “Dalit” debate and the “anti-national” debate. It would have been much more productive if the media had gone in depth, instead of skimming over such issues. There was a need to debate the very existence of student politics, and the effects it may have on youth. Most of the issues of this unfortunate incident arise from the fact that political activities in educational institutions are going on at a very dangerous level. This requires an impartial, non-partisan debate, which is sadly not possible in some TV studios today.

It also needed a deeper analysis on the situation of students in Indian education system, and treatment of Dalits in Indian society as a whole and not only colleges.

Law and order have conspicuously declined in Bihar. Natives of Bihar agree that there is a sudden rise of Jungle Raj. As reported by IBN Live, nearly 578 murders have been reported in Bihar in the last two months. I could hardly find details of these murders in any national newspapers. Bihar elections are over, so even social media sidelined the news.

These are not just statistics, as crimes do happen all over the country, but what’s more worrying is that criminals are challenging law and order by committing these crimes in daylight and in full public view. Along with numbers, the “mahaul” seems to be that of lawlessness. A constant media scrutiny of the situation in Bihar could have possibly forced the administration to sit up and act?

The horrific terror attacks at Pathankot airbase on 2nd January 2016 not only exposed the security of India, but it also ended up taking lives of many security personnel. The event unravelled with blood, anger, gaffes, politics and blame games.

Pathankot attack was comprehensively reported by the mainstream media — with concerns and with lots of negativity. Social media also covered Pathankot extensively with flavours of nationalism, jingoism, rhetoric, sarcasm, attacks and criticism.

The news, of course, was critical for the national as well as the international spectrum.

5. Implementation of Odd Even in Delhi

The ambitious pollution control plan rolled by Aam Aadmi Party in Delhi couldn’t do a lot to control the pollution of Delhi, but it gave many Delhiites smiles for relaxed and non-congested drives on the roads of Delhi.

Odd Even plan ruled headlines and columns of mainstream media for all the 15 days. Media was so excited with the plan that it declared it a success within  a day of implementation. Not only that, some of the senior national journalists declared that the air quality of Delhi has phenomenally improved, which is scientifically very illogical. Social media was expected to go berserk, it went so. This was one of the biggest implementations planned by Arvind Kejriwal, so his supporters started flooding social media from the Day 1. And with the historic background of Arvind Kejriwal and AAP negatively targeting every implementations done by BJP and Congress, it was expected that BJP and Congress supporters will inundate the social media with flaws of Odd Even plans, which they did.

Pollution control, for sure, is an urgent requirement for Delhi. However, lots of thinking and planning needs to be done before rolling a plan which impacts millions of people. From a media perspective, although they are based in Delhi, India is not Delhi, yet this even got disproportionate airtime. Add to this the fact that some senior editors seem to be close to Kejriwal, and then you have round the clock coverage of a city specific event.

A few days back, Haryana CM Khattar proudly announced that the sex ratio at birth in Haryana had shown an upward trend, as for the first time in 10 years, in December 2015, it had crossed the 900 mark with 903 girls per 1,000 boys.

The news gathered decent space in the mainstream media. It was also lauded well by the social media. Again being state specific issue one cannot expect much coverage but compared to other issues, this news went largely unnoticed.

The Pradhan Mantri Fasal Bima Yojana (PMFBY) promises to change the face of the agricultural insurance sector. The scheme provides for compensation for even loss of seed plants and post-harvest damage.  It will also provide assessment for localised calamities — including hailstorms, unseasonal rains, landslides and inundation – addressing a long-standing demand of farmers.

The news didn’t gather much attention of the media of the social media. The reason could be that such a step doesnt affect social media users.

One would expect mainstream media, especially regional language media to pick this up though, because it is important that our farmers know such a scheme exists. Purely from an apolitical point of view, considering we dd not have a good monsoon, this news is important. Though important, it will be too early to comment on the impact of this step.

No one can deny that Indian society has suppressed women for many years. No one can deny that Hindu Temples have followed patriarchal structures for years. The latest struggle and activism in front of Shani Temple was intended to provide equality and right for women to enter some Hindu temples in India. The issue is not as one-dimensional as Hindu religion’s misogyny vs Feminists. However, opportunities for healthy debates and reforms were diverted into political and religious mudslinging due to misrepresentation of facts.