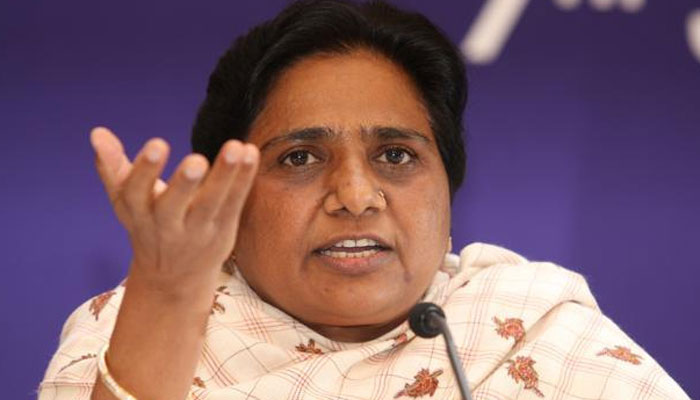 BSP supremo Mayawati whose party is performing poorly in UP seems to be very angry with the verdict. Today when she called a press conference, people expected that she would issue a statement conceding her party’s defeat, but surprisingly her press conference actually turned out to be a stage to create sensationalism and drama. She hurled allegations like EVM tampering and claimed that EVM tempering is the reason why BJP has won most votes in Muslim majority constituencies.

Most votes in Muslim majority constituencies have gone to BJP, makes it evident that voting machines were manipulated: Mayawati,BSP pic.twitter.com/DdXjaqMkQF

Besides questioning the integrity of India’s electoral process, she stereotyped the entire Muslim community into one which is always expected to vote in a set way. To avoid the so called ‘voter fraud’ she demanded that Ballot papers be brought back in the electoral process.

She even created elaborate conspiracy theories to substantiate her claims:

Either the EVMs did not accept votes other than BJP, or the votes of other parties have gone to BJP in the EVMs: Mayawati pic.twitter.com/qF741k0DpT

Mayawati seems to be in biggest denial mode of her electoral life. Thank God Congress is winning in Punjab, else it would have echoed.

This is such a disgusting statement at so many levels! The kind of ‘secular’ politics they have been thriving on.. https://t.co/j6CxF3W8vI

Mayawati is blaming EVMs for her loss. I think she means the Educated Voting Masses.#ElectionResults

“People did not vote for BJP, EVM did”- Mayawati ??

Very irresponsible of Mayawati to question the very credibility of the time tested election process, just because BJP won from Muslim areas! https://t.co/RqAJeSYiDO

As it turns out she has more demands:

Even journalists panned her for the statements:

The blaming of defeat on EVMs by @BspUp2017 Mayawati is so utterly ridiculous that words fail.

Mayawati is truly a sore loser! Shame on her for asking for elections to be held again under ‘international’ observers. She lost. Period.

Mayawati alleging EVM tampering is a sign of desperation. And that my friends is the beginning of the end of BSP sadly.. #ElectionResults

Is this the reason she is so nervous?

Big takeaway from UP: 38 seats needed to win 1 Rajya Sabha seat in Apr 2018. Mayawati will lose her own RS seat next year! #UPElection2017