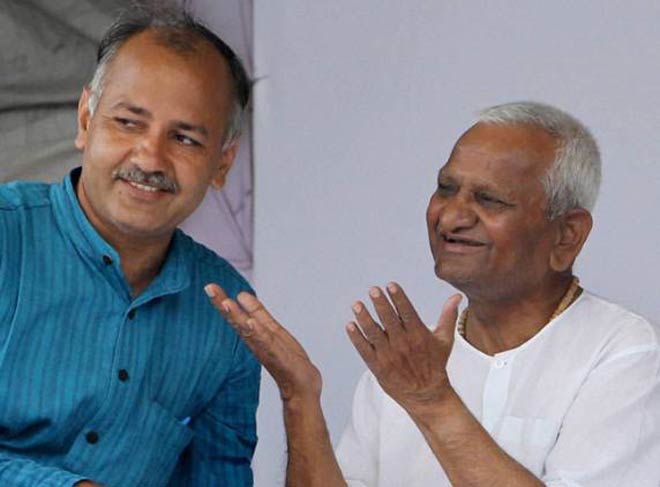 Social activist Anna Hazare, who was the guru of most of AAP’s current top brass, had criticized the party and the leadership saying that there was a difference between what the party preached and what it actually practiced. He also said that Kejriwal’s quest for power was one of the reasons why AAP lost. Anna’s criticism came after AAP lost the recently concluded MCD elections

This had aggrieved some of AAP supporters who had then proceeded to bad mouth Anna Hazare by using vile comments like Sanghi chaddi and namak haraam (disloyal) among others.

It is one thing for ordinary AAP supporters to badmouth Anna, but it’s another when a senior leader of the party, who is also the Deputy Chief Minister of Delhi, starts re-tweeting them.

Now after about 14 hours post the incident was highlighted, Sisodia came out to claim that his account was hacked when the messages were retweeted. He also claimed he wasn’t even able to delete them. Maybe he isn’t aware that one can’t delete retweets but can easily un-retweet them:

My account hacked. Someone retweeting anti Anna Hazare messages from account. Trying to delete them, not even getting deleted. 1/N

He also claimed that he had the utmost respect for Anna and appealed to people to not believe the messages that were on his Twitter page for hours:

Interestingly this realization that his account was hacked came after Arvind Kejriwal put out a message on Twitter which called for introspection:

In the last 2 days …. pic.twitter.com/0quqxJtNAt

It remains to been seen whether the AAP government launches an investigation in order to probe the matter and catch the culprits who were responsible for the alleged hack, or this incident will also end up like the case of Rajdeep Sardesai, who had similarly claimed hacked account after people complained about him abusing common Twitter users.