A farrago of unrelated topics : Tharoor and ways of spotting liars

If you have ever fancied yourself as a person with something valuable to say, you have probably wished to give a TED talk. As TED lays it out crisply on their website : “TED is a nonprofit devoted to spreading ideas, usually in the form of short, powerful talks (18 minutes or less). TED began in 1984 as a conference where Technology, Entertainment and Design converged, and today covers almost all topics — from science to business to global issues — in more than 100 languages.”

Everyone who is anyone has spoken at TED : American Presidents, Silicon Valley CEOs, top tier academics and the like. This is the sort of place where someone like Dr. Shashi Tharoor might be found discussing profound matters of world interest.

He is cool, isn’t he? More on this later in an unrelated part of this article.

It’s rather clear that it’s a tremendous honor to be in the list of Top 20 TED talks. One of these Top 20 talks was given by Pamela Meyer on “How to spot a liar“.

Pamela Meyer, whose fascination with the science of lying began with sitting through a lecture at her Harvard Business School reunion in 2006, is the author of the book “Liespotting : Proven Techniques to detect deception“.

I know. We all tell lies. As Pamela points out:

“By the time we enter this work world and we’re breadwinners, we enter a world that is just cluttered with spam, fake digital friends, partisan media, ingenious identity thieves, world class ponzi schemers – a deception epidemic.”

To be fair, I may have inserted a few unrelated links, but I hope you just focused on the text. If not, form here onward, just focus on the words.

The first symptom that Pamela provides in her list of liespotting techniques is “verbal dodging”, i.e. excessively formal language that the liar uses to create some psychological distance between her/himself and the lie.

Pamela goes on to illustrate this phenomenon with one of the most famous lies ever told (YouTube screenshot): 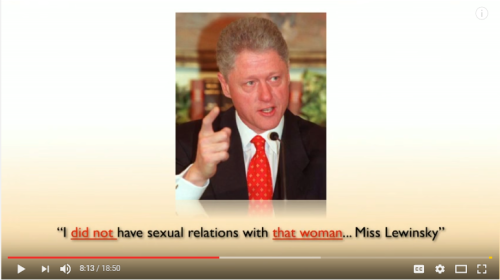 She explains (emphasis added, not to prove any point, as you will discover later):

“Well, what were the telltale signs? Well, first we heard what’s known as a non-contracted denial. Studies show that people who are over-determined in their denial will resort to formal rather than informal language. We also heard distancing language — that woman. We know that liars will unconsciously distance themselves from their subject, using language as their tool.”

Enough about lying. Let’s come to the other topic of this post which is absolutely, blaringly, categorically, definitively and entirely unrelated to the discourse on liespotting techniques presented in any of the preceding paragraphs.

We will now have a discussion of how cool Dr. Shashi Tharoor is. You know, I think he becomes even more cool when I guess he would be angry. Like the time Arnab’s Republic TV claims to have some “expose” and for some reason #SunandaMurderTapes starts trending on top of Twitter.

Exasperating farrago of distortions, misrepresentations&outright lies being broadcast by an unprincipled showman masquerading as a journalst

A farrago? Well, thank goodness for the internet:

Thanks to him, people of the cattle class have  now been enriched with this old Latin word for cattle fodder. Didn’t I tell you how cool he is?

This brings back memories. I think it was in 2013 that I learned words like “recuse” and “lacerate” how to properly use them in a sentence. And they said being a news junkie never did anyone any good.

Most importantly, we learn that no matter what, guys like Shashi Tharoor will always be cool.

Girish Pal and Rahul Kasana - the two employees of the accused Tahir Hussain said in their statements to the police that they were present in the office of Hussain in Khajuri Khas area on February 24.
Read more
Opinions

Between 2002 and 2007, the National Human Rights Commission (NHRC) found 440 cases of suspected “fake” encounters by the police across India.
Read more

Locals of the fishing suburb of Poonthura near Thiruvananthapuram attacked a team of health workers, including a doctor, who had gone to collect swab samples

While people are saying “dead men tell no story” after Vikas Dubey encounter, Md Shahabuddin narrated no tales even after jailed for years

When Rajnath Singh fought for the country but lost an election

Today is the birthday of Defense Minister Rajnath Singh. And let me tell you a story about the time Rajnath Singh lost from Mohana Assembly constituency in the 1993 elections to the Uttar Pradesh Assembly.

Sony Liv was criticised for the promotional of its web series Undekhi that released on Friday.
Read more
Media

Notorious gangster, Vikas Dubey, who was arrested from Ujjain, Madhya Pradesh was killed in an encounter in the wee hours of the morning on Friday
Read more
Social Media

In the video titled "Journey to the centre of my brain", Sebastian is seen thanking God because 'all the people who spoke Sanskrit are dead'.
Read more
News Reports

Vikas Dubey killed in an encounter after he attempts to flee from police custody: Here is what happened

The encounter broke out between Vikas Dubey and the Uttar Pradesh Special Task Force (STF) after the gangster tried to flee upon reaching Kanpur.
Read more

Girish Pal and Rahul Kasana - the two employees of the accused Tahir Hussain said in their statements to the police that they were present in the office of Hussain in Khajuri Khas area on February 24.
Read more
News Reports

“If this was Uttar Pradesh, I would have set your houses on fire”: Vikas Dubey had said to Ujjain police officials after his arrest

With Apple’s plans to exit China, its Taiwanese supplier Foxconn to invest $1 billion in India in iPhone manufacturing unit

Between 2002 and 2007, the National Human Rights Commission (NHRC) found 440 cases of suspected “fake” encounters by the police across India.
Read more
Government and Policy

‘Safeguarding cows is our priority’: Minister says Karnataka preparing to implement a ban on cow slaughter

Prabhu Chauhan, the Animal Husbandry Minister in Karnataka, informed that the BJP government is in the process of implementing cow slaughter ban in the state
Read more
News Reports

Locals of the fishing suburb of Poonthura near Thiruvananthapuram attacked a team of health workers, including a doctor, who had gone to collect swab samples
Read more
News Reports

The Islamic terrorist, who unleashed terror and killed the BJP leader Wasim Bari and his two family members at their shop in Bandipora, north Kashmir has been identified by the security forces.
Read more