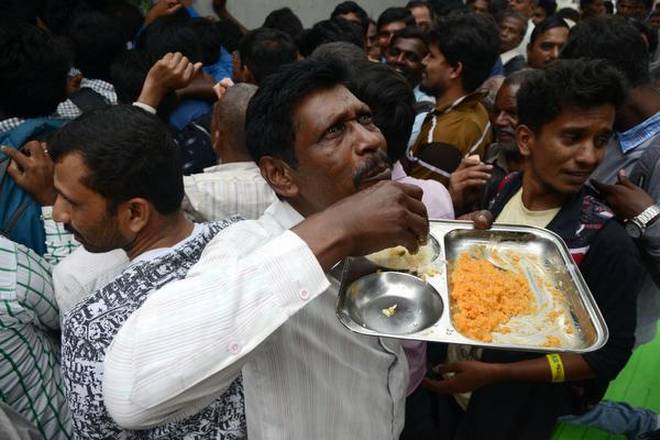 Karnataka Chief Minister Siddaramaiah wanted to end hunger in the state with “Indira Canteen” — supposedly affordable canteens branded after Indira Gandhi. The food is available for as less than just Rs. 10, though Rahul Gandhi had to borrow that amount from Karnataka Congress President Parameshwara when he inaugurated it.

But the canteens are now in new for wrong reasons. Within two days of opening of Indira Canteen in Bengaluru, reports are emerging that food at Indira Canteens has been allegedly served without proper quality checks and in plastic drums.

Items supplied in these canteens like rice, sambar, pulao, upma were prepared in a marriage hall kitchen, located in the Palace Grounds premises in Bengaluru. These are supplied to various canteens allegedly without proper quality inspections.

BBMP (Bengaluru Mahanagara Palike) which is under the Congress control is managing the cooking exercise. In is being alleged that money spent from the state exchequer is being used to give contracts to Congress agents, as proper tender procedure has not been followed to allot cooks/suppliers. Moreover, the kitchens that were supposed to cater to these canteens is not yet ready hence, everything is going on in an ad-hoc basis.

There are also reports which suggest that either people who visited the canteen had to wait for hours for food or were not served at all as they ran out of food. The reports also suggest that although each helping was to have 300 grams of rice, 150 grams of sambar and 50 grams of chutney, the quantity was much less, complained several dissatisfied customers.