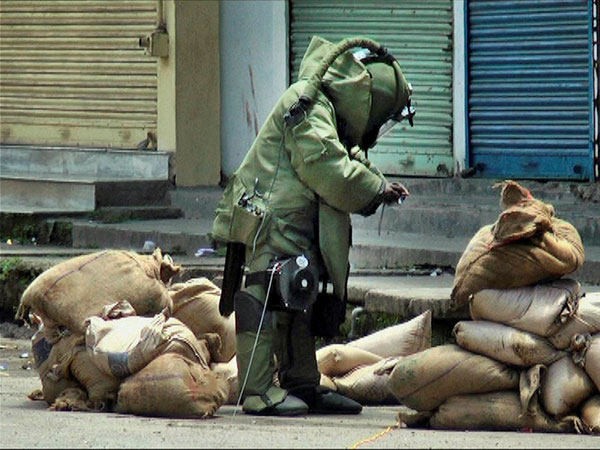 A total of 14 live bombs were reportedly recovered from a shop in West Bengal’s Howrah district on Thursday.

This discovery was made by the bomb disposal squad after the shop owner named Komer Ali was injured in an explosion there on Wednesday. He as a result was admitted in a Uluberia hospital with severe burn injuries. The explosion had happened when Ali was closing shop, which is located in the Teen Kapati Pool region which falls under the under the jurisdiction of Manikpur police station.

This explosion thus had resulted in a search operation by the bomb disposal squad, the next day. With Komer being in the hospital, he hasn’t yet been interrogated by the police.

It remains to be seen of there is some form of a terror angle in the case, considering the fact that the Durga Puja is just 11 days away. In 2013 also 24 crude bombs were recovered from Kolkata, barely a week before the start of Durga Puja.

Such incidents of bombs being recovered have unfortunately become a very common occurrence in West Bengal, with some of them being even stored in establishments owned by alleged political party workers.

In May, around 70 live bombs were recovered in Chandipur village of the Birbhum district which had caused panic in the area.

We had recently reported how a house of a former Trinamool Congress worker was destroyed after 200 bombs kept there by him had accidentally exploded. This incident had happened in Demutita area of Lokpur village, which is about 50 Kms from Santiniketan. The house owner named Sheikh Samirchand was reportedly a notorious criminal who even had the backing of a Trinamool faction. Even though the party had denied any associations with him, the villagers were insistent on his links with the ruling party.

This February there were reports of 3 people getting seriously injured after they were making bombs in an under-construction house belonging to a Trinamool Congress leader named Babu Mondal. This incident had happened in Hariharpara village of Kalna which falls under the Burdwan district.

Similarly two men named Hafizul and Tarik Hussain were killed in Birbhum in 2016 when the bombs they were reportedly making to attack a rival group exploded accidentally. 8 people had also died in Birbhum this April, while making bombs in a house.