The Dynasty’s tryst with adult magazines The adult magazine Playboy, which featured scantily, almost naked women on the centrefold, had ran an exclusive interview of Independent India’s first Prime Minister Jawaharlal Nehru in October, 1963. On Thursday, Playboy Twitter handle tweeted an image which had Nehru’s interview, but within minutes, deleted the same.

Hey @Playboy Why you deleted tweet? Link: https://t.co/mNyGdvTwLj Do it again , put #KnowYourLegacy and correct spelling is Jawaharlal Nehru pic.twitter.com/UkPSVOHjTw

Turns out the October, 1963 edition of Playboy indeed run an “exclusive” interview of Nehru, albeit with a disclaimer on the third page that the Indian Embassy in Washington had denied that any such interview of Nehru ever took place. The note read,

After the rest of the magazine had gone to press, we received word from the Indian Embassy in Washington that our interview with PM Nehru was not, in fact, the result of an exclusive, personal conversation with the head of the Indian state, but simply a gathering together of public pronouncements made by the Prime Minister in various speeches, statements, etc., over the past several years….

…the Nehru material was submitted to us by a well-regarded journalist-publisher who has previously conducted numerous similar interviews with famous personages all over the world; it was sold as an actual interview, recorded on tape, and the covering letters that so described the material also included photographs of the Prime Minister and journalist together. There was no reason to doubt its validity and we consequently published it in good faith as a personal interview.

So essentially, while we are not sure whether Nehru gave an exclusive interview to the journalist, Playboy did publish the piece as an interview with Nehru. 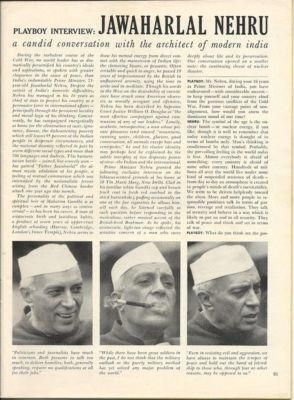 Apparently, Playboy, which was banned by Indian government back then, featuring the alleged interview sold at premium in India.

Surprisingly, Nehru wasn’t the only one to have an ‘exclusive interview’ in an adult, men’s lifestyle and softcore pornographic magazine. His grandson, Rajiv Gandhi, also allegedly gave an exclusive interview to Penthouse magazine, which was published in the August, 1987 issue when he was the Prime Minister of India. Even then, the Prime Minister’s office denied giving interview to Penthouse. Instead they thought the interview was for a book and tried to legally stop the publication of the interview. Penthouse, though, published the interview, albeit with a note of protest from the Indian Government. 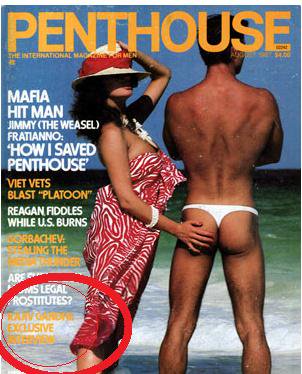 But that is not all. Prime Minister Indira Gandhi, too, gave an exclusive interview to men’s adult pornographic magazine Oui in May, 1973.