OpIndiabringing the \'right\' side of India
More
HomeNews ReportsRahul Gandhi must answer why his Data Analytics Chief is sneering at poor farmers...
News Reports
Updated: 20 February, 2018

On Feb 5, 2018, Congress President Rahul Gandhi took to Twitter to announce the appointment of one Praveen Chakravarty as the head of the party’s Data Analytics Unit. 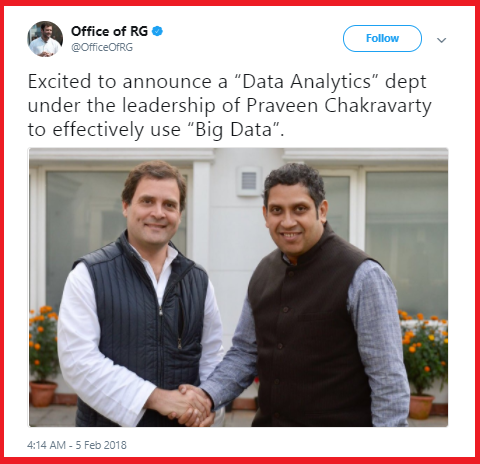 Anybody who is even vaguely familiar with Congress culture will understand what a huge deal it is to be welcomed with a publicized handshake from Rahul Gandhi himself. Suffice to say Praveen Chakravarty will play a key role in shaping the Congress party’s strategies and policies going forward.

However, it seems that Mr Praveen Chakravarty has, in the past, made some highly controversial observations regarding economic policies that are intended to directly benefit the poorest of our citizens. Sample this piece, which we wrote for Bloomberg.

This was written in June 2017, shortly after loan waivers were announced to farmers in the state of Uttar Pradesh. The divisiveness is apparent from the headline, which is a shameful attempt to pit the poor of various states against each other. More shockingly, he writes thus:

“1.5 crore farmers of the state of Uttar Pradesh (UP) were granted a waiver of their agriculture loans, totalling Rs 36,000 crore or $5 billion by the UP government. The farmers of UP did not need to indulge in creative protests for these loan waivers. They were just rewarded for voting the Bharatiya Janata Party (BJP) into power in their recent state elections. The TN farmers are still protesting, to no avail.”

See the mocking tone in the words: “The farmers of UP did not need to indulge in creative protests for these loan waivers”.

Seems like Rahul Gandhi’s Data Analytics chief demands that suffering farmers should have set up some kind of amusing spectacle for the ruling class so that they could “earn” their loan waiver. What kind of heartlessness is this?

The heartlessness is followed in the next line by his obvious irritation : “They were just rewarded for voting the Bharatiya Janata Party (BJP) into power in their recent state elections.”

And he concludes his paragraph by pitting the hardship of one group of farmers against those of another: “The TN farmers are still protesting, to no avail.”

If there was ever a display of arrogance, privilege of wealth, condescension towards the poor and the policy of divide and rule all rolled into one, this is it.

It should be remembered that Rahul Gandhi himself, during his campaign in the UP election, had promised loan waiver to farmers along with making several other promises. In fact, he did an entire yatra on this issue from Deoria to Delhi. He even called it the Kisan Yatra. 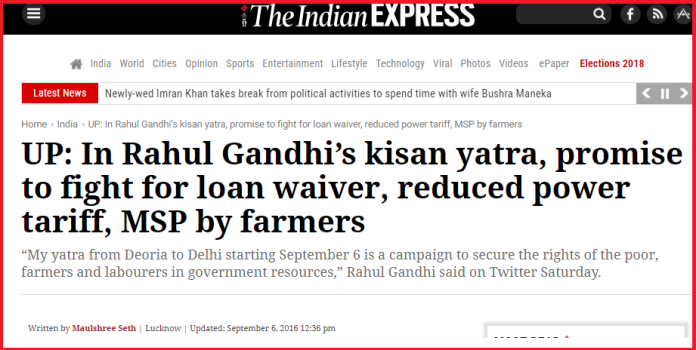 So, did the thinking in the Congress Party regarding loan waivers suddenly change simply because the people of Uttar Pradesh chose to rebuff Rahul Gandhi’s advances?

Considering that Praveen Chakravarty is now a key man in the party, the Congress and Rahul Gandhi should clarify what their stance is on loan waivers for Uttar Pradesh farmers? Are they for or against it? Do they think that UP’s farmers deserved a helping hand from the state or not?

Or are they waiting for UP’s farmers to hold a protest that is “creative” enough to amuse the people in the top echelons of the Congress party and melt their hearts?

The rest of Praveen Chakravarty’s article is packed with sentences intended to rub the noses of people of India’s poorest states into the ground. Such as this:

Now that Mr. Chakravarty is head of the Congress’ Data Analytics unit, I think we deserve to know what he feels the numbers should be. What does the Congress think? By how much should the benefits for states such as Bihar, UP, Odisha and Madhya Pradesh be cut?

Mr. Chakravarty ends with a fairly clear advocacy for cutting benefits to the poor in these states:

“It may be tempting to interpret the economic disparity among India’s states as a case for more redistribution from the richer to the poorer states. But given India’s unique political and social diversity, it will likely be counter-productive with adverse consequences. ”

Their views on farm loan waivers in Uttar Pradesh and welfare programs for the poor of states such as Bihar, Odisha and Madhya Pradesh.

We don’t expect a sympathetic attitude from the Congress Party towards the poor. No other party has benefited so much from the poverty and backwardness of India. But I think we deserve a clarification from Rahul Gandhiji. Does he find welfare programs for the poor to be “counter productive with adverse consequences?” Yes or no.