More
Home Opinions Congress and the Left are brothers in arms with their edifice of lies being...
Opinions
Updated: 22 May, 2018 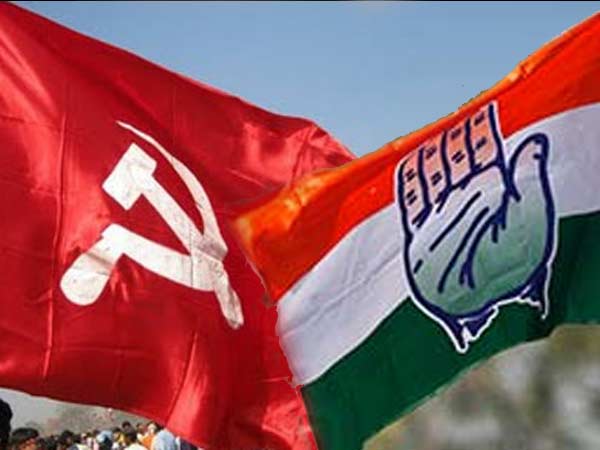 Jairam Ramesh of the Congress Party commiserated with the CPI(M) over its defeat in Tripura and stated that the nation cannot afford the demise of the Left. There is, of course, a long history of camaraderie between the two parties and as both of them continue to suffer electorally with the rise of Hindutva, they are finally coming out of the closet regarding their relationship as they both are currently faced with an existential threat. Sumanta Banerjee, the historian and civil rights activist has stated that the Left must team up with Congress to save democracy and that a win for the BJP in 2019 would spell the end of democracy in the country.

Left has to be strong in India, the demise of Left will be a disaster for India.We are political rivals but I am the first to say that India can’t afford demise of the Left.The Left also has to change its mind,people’s aspirations and society are changing: Jairam Ramesh,Congress pic.twitter.com/HPCfCuV2nz

All this while, the Congress and the Left has been engaged in a game of shadow-boxing. Sunil Deodhar, the architect of BJP’s victory in Tripura, was correct when he pointed out that the Congress did not really make any serious attempt to dislodge the communist party from the North-Eastern state as they required the Left’s support at the Center. In the last West Bengal Assembly Elections, the Congress did ally with CPI(M) against Mamata Banerjee. And as the dark night approaches, it looks increasingly likely that they will fight the polls together in the General Elections 2019.

The Congress and the Left are indeed natural allies. Ideologically, there is hardly any difference between the two and they wouldn’t have to compromise one bit on the ideological front to tie up with each other. It was Indira Gandhi after all who seceded the intellectual space entirely to the communists. The Communists, on the other hand, did support her Emergency. It is a consequence of Indira Gandhi’s politics that the entire academia has been occupied by Leftist historians. In return, our historians painted the Nehru-Gandhi dynasty in golden colours and whitewashed entirely the atrocities committed against Hindus to uphold the ‘secular fabric’ of the country; a euphemism for minority appeasement and denial of the genocide of Hindus that is of paramount importance to both parties.

The Communists and the Congress have been traditional allies for decades. The communist intellectuals, after all, have prospered under the patronage of the Congress Party. And the Congress has much to be thankful for as well. For it is because of Marxist historians that the sins of the Nehru-Gandhi dynasty have largely escaped any critic until now and an image has been created in the minds of the youth that the history of the Indian struggle for independence does not exist beyond the Indian National Congress. In his book, Eminent Historians, Arun Shourie elaborated on how the Left distorted history to fit its ideological narrative and toyed with facts to suit its whim. The Congress nurtured intellectuals to provide legitimacy to its existence post-independence and all the intellectuals it nurtured to further its agenda happened to be communists.

Leftist historians have denied the thousands of years of existence of the Hindu civilization in their works and conjured the myth that India as a nation was born on the 15th of August, 1947, in stark contrast to the truth which is that India is an avatar of the Hindu Civilization in a world dominated by nation-states. All of this naturally benefited Congress as they were given sole credit for the creation of the Indian state while the contribution of a million other freedom fighters was overlooked. Thus, Communists worked hard for their patrons and created the narrative that Congress was integral to the identity of the Indian nation.

Another narrative that the Congress and the Communists collaborated closely to create is the ‘Idea of India’. The much vaulted ‘Idea of India’ is ‘doublespeak’ for a nation that does not believe it existed before 1947, fosters communal harmony by engaging in genocide denial of Hindus, whitewashes the crimes of murderous savages and of course, substitutes Dharma in the lives of Indians with imported Western ideals such as Communism and Secularism and Socialism. It is, indeed, quite easy to see how the interests of the Left and Congress coincide quite extraordinarily when one explores the truth of the ‘Idea of India’.

The Congress and the CPI(M) are also united by a common enemy: Hindutva. Ever since the independence of our nation, the Congress has really had one eternal and formidable enemy. And naturally, for the Left as well, the glorious history of Hindus that Hindutva propagates is a major critic of the Left’s monolithic version of History as an eternal struggle between the proletariat and the bourgeois. Therefore, both the Congress and the CPI(M) knew the enemy had to be contained. Also, both the parties were inspired by western ideals while Hindutva cherishes Indic values. Therefore, followers of imported ideologies find it mutually beneficial to gang up against Indics.

To put it rather bluntly, the Congress and the Left are part of the same establishment, the establishment that has brainwashed the minds of generations of youth and treated the nation as its personal Jagir. As is obvious, the squabble between two factions of the same establishment can only last till both are threatened with obliteration by an enemy from outside the establishment. Now that Kesariya is flourishing across Bharata again, it’s time for the Congress and the Left to forget their minor differences and present a united front against the BJP. Their collaboration over the years has resulted in generations of ignorant youth who are unaware of the sacrifice of their ancestors and the glorious history of our land. However, Dharma is so ingrained in the culture of this great nation that despite their desperate attempts, they have largely been unsuccessful.

In a previous article of mine, I had highlighted the Culture War that is currently in progress in our country. And in the culture war, one faction has been created and nurtured by the establishment over decades while the other is the traditional Hindu society that has thrived for thousands and thousands of years. Lines have been drawn and forces have marched into battle. When the establishment cries that Democracy is under threat, it is merely a euphemism for their receding influence in electoral politics. When the establishment cries that the ‘Idea of India’ is under threat, it is merely indicative of the fact that the edifice of lies that it has built over the years is beginning to crumble to dust. The mutually beneficial mythical narrative about the History of India that the Communists and the Congress have worked so hard to build is falling apart like a pack of cards. Desperate times call for desperate measures and it is only natural that the two factions of the establishment based on Western ideals is rushing to each other’s aid in a time of crisis.