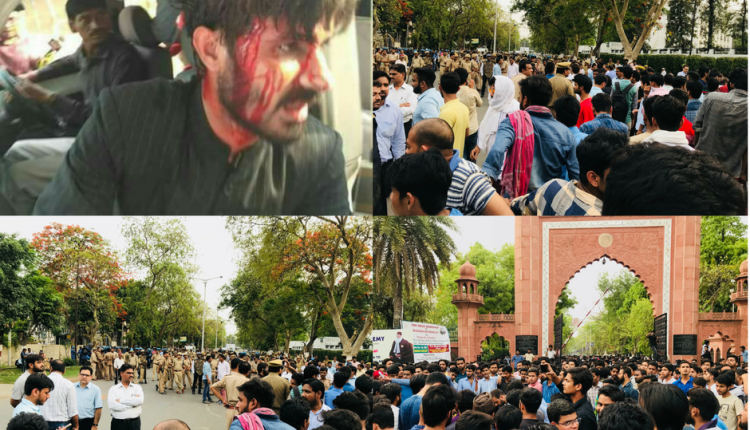 28 students and 13 cops got injured as per reports in a clash which broke out between police and students of Aligarh Muslim University (AMU) on Wednesday, which has been witnessing a row over a decades-old photograph of Pakistan founder and freedom fighter Muhammad Ali Jinnah.

Earlier on Wednesday, Rapid Action Force of the Uttar Pradesh Police was deployed after students and some right-wing activists almost came to blows. The right-wing activists were demanding the removal of Jinnah’s photo, to which the students objected. Later in the evening, hundreds of students tried to march to the local police station, where the activists had been confined. Unable to control them, the RAF men used force, sources said. The clash took place at the university’s main gate.

It is said that most of the injuries sustained by the students were caused by blunt objects like cane, some students have sustained head injuries, some just bruises.

Aligarh Muslim University has always been nurturing several altercations and brawls. The AMU students’ union has recently been seen in controversy for objecting to the University Administration’s invite to President Ramnath Kovind for the convocation ceremony. The University again hogged the limelight when one of its students was found to have joined the terror organisation Hizb-ul-Mujahideen. Similarly last year in October, AMU had protested against an invitation extended to a minister in Yogi Adityanath government for inviting a BJP leader.

It seems as if AMU students leave no opportunity to take up scuffles be it big or small, last year too they made headlines for creating ruckus at Aligarh railway station over a petty issue.