Amid country wide protest against the Sabarimala verdict, Congress makes a turnaround in its stand 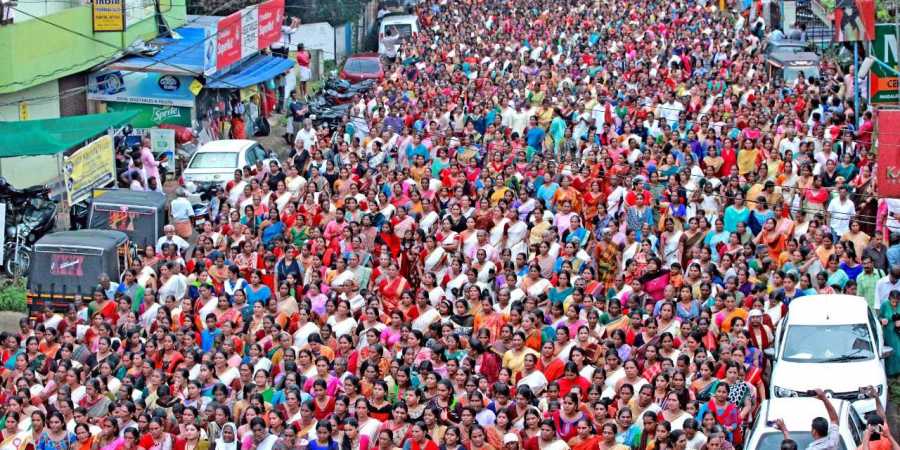 Following the Supreme Court verdict allowing women of all ages to enter the Sabarimala temple in Kerala, the state is facing massive protests against the judgement. While the ruling CPM has supported the SC order, other parties are opposing the order. Members of both Congress and BJP has hit the street in protests, along with members of various religious organisations and devotees of Lord Ayyappa.

Most of the protesters are women, who seem to value tradition more than right to pray at a particular temple. Thousands of devotees, mostly women, took part in ‘namajapa’ (chanting the of Lord Ayyappa) marches in various places in the state. The protesters are demanding that the Kerala government should file a review petition on the Supreme Court verdict. Even though the state government invited the priests of the temple for a meeting with chief minister Pinarayi Vijayan, the priests have rejected that offer. The tantris, or the priests of the temple, has said that they will meet the CM only after the review petition is filed.

Although the state unit of Congress has joined the protests, this has come as a turnaround of their stand. Initially, the Congress had supported the verdict, saying they welcome the decision of the top court, saying it’s a progressive and far-reaching decision towards gender equality and has given a fresh expression to women’s rights. but traditions at religious places of worship must not be disturbed.

Congress spokesperson Randeep Singh Surjewala had tweeted this in support of the apex court judgement:

We wholeheartedly welcome this progressive and far reaching decision in case of entry into #SabrimalaTemple .

Suoreme Court decision has given a fresh expression to the rights of women and how they cannot be subjugated to any religious practice, no matter how sacred.

Although the central leadership of Congress had supported the verdict, its state unit had decided to take the middle path. Congress leader and opposition leader in Kerala had stated that while the SC verdict is welcome, traditions at religious places of worship must not be disturbed.

Perhaps after the widespread protest in the state and in fear of losing Hindu votes, Congress party has now overturned its position and has demanded that state government should file a review petition in Supreme Court and bring an ordinance to maintain the traditions of Sabarimala temple.

Protests are not limited in Kerala only, they have spilt over to other places in the country. On October 7, a huge protest was staged by Lord Ayyappaa devotees in national capital Delhi. A large number of devotees assembled at Jantar Mantar and shouted slogans against the apex court verdict.

Later the protesters reached Kerala House to submit a petition to the authorities. There, they blocked the car of Kerala Minister EP Jayarajan and didn’t let him enter the Kerala House.

Meanwhile, the Pandalam Palace trust has decided to file a review petition themselves. The Pandalam palace is closely linked to the legend of the Sabarimala deity.

Kerala: Representatives of Pandalam Palace & Sabarimala priests will not attend the meeting called by Chief Minister Pinarayi Vijayan tomorrow to discuss the Supreme Court verdict over women’s entry in Sabarimala Temple. The Palace trust will file a review petition in the matter.

Amid this situation, the CPM finds itself in a somewhat tight situation. The party supports the SC verdict fully but now seems to be worried after seeing the widespread protest. The party is also worried that Congress and BJP will be able to take advantage of the public sentiment against the verdict and the party will be seen as anti-Hindu. Somewhat softening its position, the party state secretary on Friday said, “Women can go to Sabarimala in the wake of the SC order. Those who are not interested need not go as well”. But they seem to miss the point of protesters, as the protesting women are not “not interested” in going to the temple, but they are demanding the restoration of a long tradition related to the temple. The party has also asked the state government to talk with all the stakeholders in the issue to find a solution.