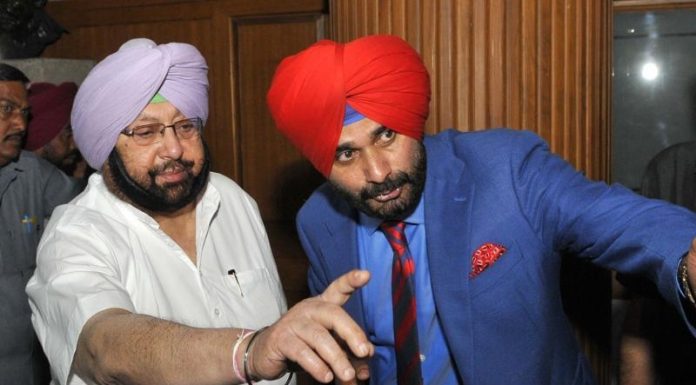 On the day Punjab minister Navjot Singh Sidhu accepted the invitation of Pakistan to attend the foundation stone laying ceremony for the Pakistan side of the proposed Kartapur Corridor, Punjab chief minister Amarinder Singh has declined the invitation sent to him.

Amarinder Singh said that due to continued terrorist attacks in Punjab, killings of Indian soldiers by armed forces of Pakistan, he will not be attending the event. He said, “not a day passes when Indian soldiers are not killed or wounded on the line of control in Jammu and Kashmir,” adding that “rather than moving towards normalcy these incidents are escalating.”

The Punjab chief minister also accused ISI of starting its “nefarious activities within Punjab.” He wrote to Pakistan Foreign Minister, “I hope the Prime Minister will understand that under these circumstances it will not be possible for me to be present in Pakistan on this historic occasion, despite the fact that paying my respects at Gurdwara Sri Kartarpur Sahib has always been my cherished dream which will hopefully be fulfilled once these hostilities and killings are stopped.”

Punjab minister and Congress leader Navjot Singh Sidhu also has been invited by the Pakistan Foreign minister Shah Mehmood Qureshi, and Sidhu had happily accepted the invitation. In a reply sent to Qureshi, Sidhu wrote that he is accepting the invitation with great honour and unalloyed joy.

Responding to invitation of Pakistan Foreign Minister Shah Mehmood Qureshi to attend opening ceremony of #KartarpurCorridor corridor,Navjot Singh Sidhu writes “I look forward to meeting you on this historic occasion. My application for permission to attend is now lodged with MEA” pic.twitter.com/4NexsNPtxS

Pakistan had invited external affairs minister Sushma Swaraj also, but she politely declined the invitation citing prior commitments. She also informed Pakistan that two union ministers Harsimrat Kaur Badal and Hardeep Singh Puri will be attending the event representing the government of India.

The opposite reactions by Amarinder Singh and Navjot Sidhu yet again highlights the growing the difference between the two. Earlier, the Punjab CM had criticised Sidhu for his acts during Imran Khan’s swearing-in ceremony as PM of Pakistan. Sidhu was seen hugging Pakistan army chief on that occasion, which was widely criticised in India. At that time, Amarinder Singh had said, “everyday our jawans are getting martyred. To hug their Chief General Bajwa…I am against this,” The CM had also clarified the Sidhu went to Pakistan on personal capacity and on an official visit, disassociating the Punjab government from the controversial visit.

Before this, Navjot Sidhu had said that he respects the authority of the CM but that does not mean he has put a lid on his mouth. He was talking about regularisation of illegal colonies in the state when he made these comments.