In its submission to the Court, the ED claimed that Christian Michel had attempted to secretly communicate with his lawyer, Aljo Joseph, which did not escape their eyes. It is pertinent to mention that Joseph was expelled from the Congress party after it became a major talking point in the media.

OpIndia.com has accessed the submissions made by the Enforcement Directorate today at the Delhi Patiala House Court seeking an extension of custody for alleged Agusta Westland middleman Christian Michel.

As we have reported earlier, the ED has been granted 7 days of custody by the Court. The ED dropped several bombshells in the Court, even asserting that Michel has mentioned a certain “Mrs Gandhi” during interrogation. Officials also verbally mentioned that Michel has also named “Italian lady’s son R who might become PM’.

In its submission to the Court, the ED claimed that Michel had attempted to secretly communicate with his lawyer, Aljo Joseph, which did not escape their eyes. The agency stated, “During the medical examination, Mr Christian Michel James stood up and turned towards his advocate Mr Aljo Joseph standing next to him and acted like shaking hands with the advocate and saying him good-bye and extended his hands for hand-shake. It was noticed that Mr Christian Michel James secretly handed over a folded paper to his counsel Mr Aljo Joseph.” The incident was noticed by the Deputy Director present in the room and Joseph was asked to turn over the paper to them. 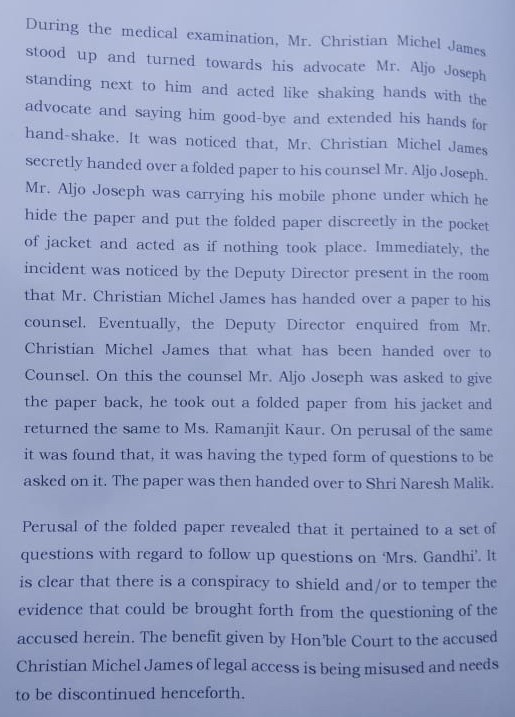 The agency discovered that the contents of the paper were related to questions about ‘Mrs. Gandhi’. It was this incident the ED had referred to while demanding that the Court discontinue Michel’s lawyer access. It stated, “Perusal of the folded paper revealed that it pertained to a set of questions with regard to follow-up questions on ‘Mrs. Gandhi’. It is clear that there is a conspiracy to shield and/or to temper the evidence that could be brought from the questioning of the accused herein. The benefit by Hon’ble Court to the accused Christian Michel James of legal access is being misused and needs to be discontinued henceforth.”

It is pertinent to mention that Aljo Joseph was the national in-charge of the legal department of the Indian Youth Congress, the youth wing of the Congress party when he appeared for Michel in Court for the first time. He was then expelled from the party after it became a major talking point in the media. The ED asserted that custodial interrogation was necessary to for confronting his Indian connections identified thus far. It has also mentioned that the set of questions prepared for him have not yet been completed. Michel has also been described as ‘non-cooperative’ and making claims which contradict records. The agency said, “The conduct of the Accused has been non-cooperative and he has been found to be making various claims which are contrary to the records. His custodial interrogation is thus required to confront him with the documents and ascertain the true nature of transactions; including the documents seized by the Italian Police.” The agency believes that further interrogation would enable the agency to reach a logical conclusion regarding a variety of issues including the determination of the exact quantum of money laundered, the modus operandi of the accused, the exact money trail involved and other such matters.

Most importantly, the ED states that further interrogation will help in “Unearthing the deep-rooted conspiracy and identification of all his accomplices including the IAF officials, MoD officials, bureaucrats and politicians who gained an undue advantage for getting the contract in favour of M/s AgustaWestland.

The investigative agency also asserted that custodial interrogation will help them in “Ascertaining the quantum of commission received by Mr Christian Michel James from M/s AgustaWestland and the kickbacks forwarded to other middlemen, IAF officials, Indian Bureaucrats and Politicians.” 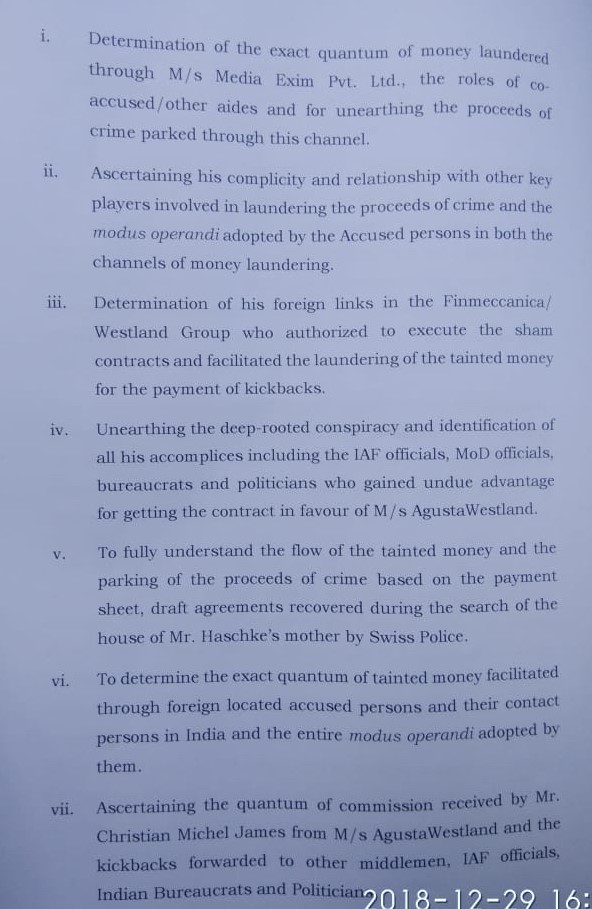 The agency also stated that some of the key issues currently being investigated are the modus operandi used by the accused to eliminate TATA and HAL from competition in an Italian deal, the modus operandi adopted to influence the German deal and the manner in which the accused collected and misused information leading to actions under the Official Secrets Act. The ED’s submissions in Court reveal a turbulent time ahead for the Gandhi Parivar. The BJP, in a press conference earlier today, has already attacked the family and claimed that it has exposed the family and that Manmohan Singh presided over a ‘loot raj’ during his tenure as Prime Minister. Law Minister Ravishankar Prasad has declared that the Gandhis have a lot of explaining to do.

Christian Michel is accused of money laundering, bribery, and fraud in connection with the AgustaWestland scam. It is believed that he paid kickbacks to numerous ’eminent personalities’ including celebrity journalists to swing the deal.