The tourism sector is a parameter of a country's overall 'health'. With a booming economy, robust infrastructure and new developmental projects, more Indians have been enjoying holidays every year. The number of foreign tourists arriving in India has also seen steady growth.

Let us deep-dive into how the country progressed in terms of Tourism in the last 14 years. We shall be evaluating our growth in Tourism on both fronts- citizens going to exotic foreign locations and domestic places for vacationing as well as foreigners choosing India as their tourist destination.

As per the data published by the Ministry of Tourism, the number of Indians going for a holiday to foreign destinations had increased from 6.21 million in 2004 to 16.63 million in 2013. This means a growth of approximately 1.04 million more Indians touring abroad every year. However, under Modi rule, the number increased to 23.94 million as of 2017. This effectively means that in 4 years of Modi-rule, 1.82 million more visitors were added every year. 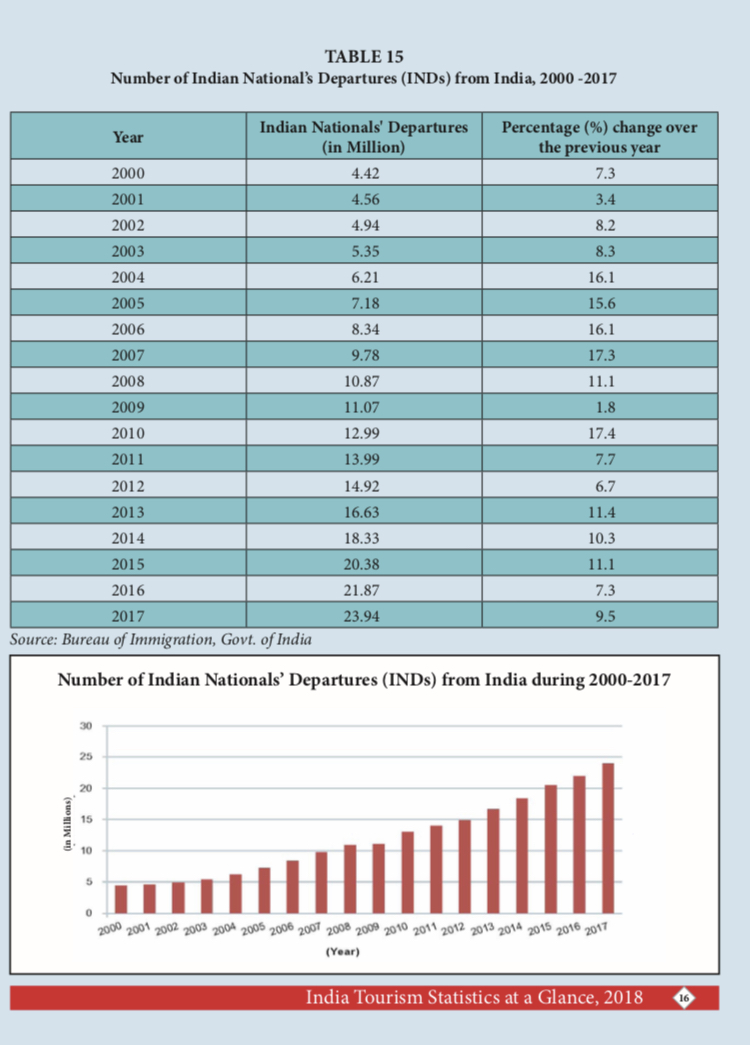 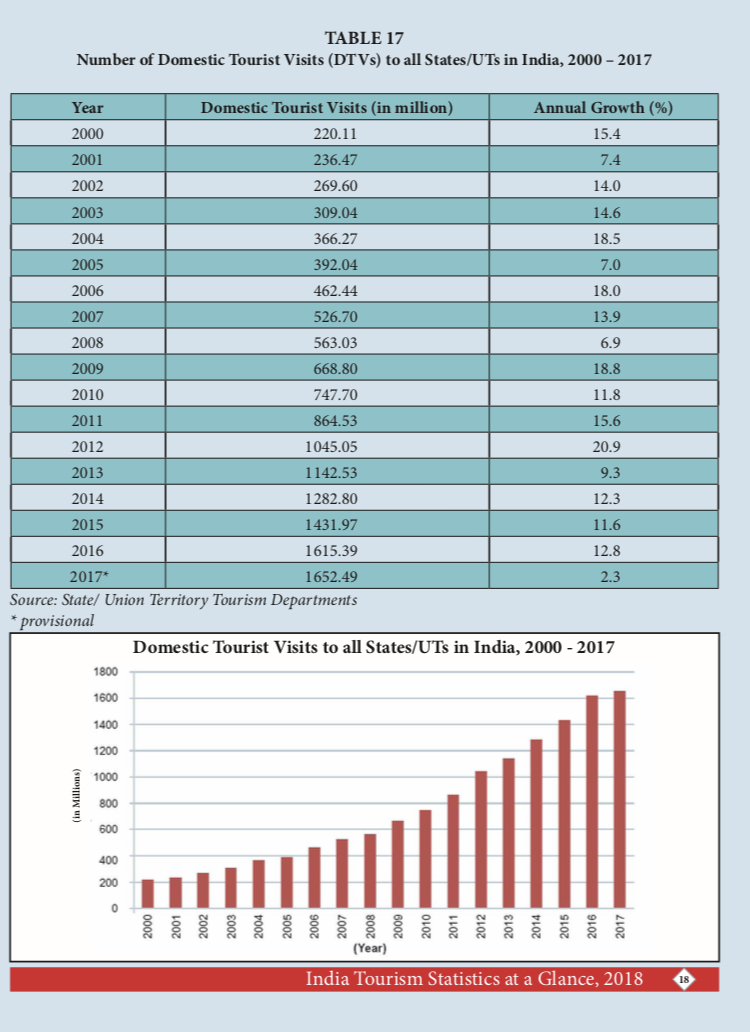 The number of DTVs increased to 1652.49 million in 2017. Comparing it with the UPA data, a growth of approximately 510 million tourists in just 4 years of Modi government. This translates to an addition of about 127.5 million DTVs every year.

In the past 4 years, India has witnessed a remarkable spurt in the number of Foreign tourists visiting the country. From  6.97 million foreign tourist arrivals (FTAs) in 2014, we have leapfrogged to 10.07 million FTAs in 2017. Till June 2018, the FTA influx had already gone past 5.6 million. If one is to calculate the average increase in the absolute number of tourists per year from 2014 to 2018, it comes close to 0.78 million. Comparing this with the Congress-led UPA’s rule from 2004 to 2014. In 2004, 3.46 million foreigners chose our country as a tourist destination and in 2013, the number had just risen to 6.97 million. So in the period of 10 years, the average increase in the number of tourists per year was meagre 0.35 million. What Modi government achieved in the last 4 years, the UPA government couldn’t in 10 years of their governance. The 4 years of Modi governance brought about almost double the number of foreign tourists to the country per year to the number of tourists that came under the Congress regime.

In another important aspect, the country ranked consistently between 45 to 35 in the list of countries preferred by tourists in the Congress-ruled decade from 2004 to 2013. However, under Modi rule, in just 4 years India jumped several ranks up and is at 26th as of 2017 tourism data. 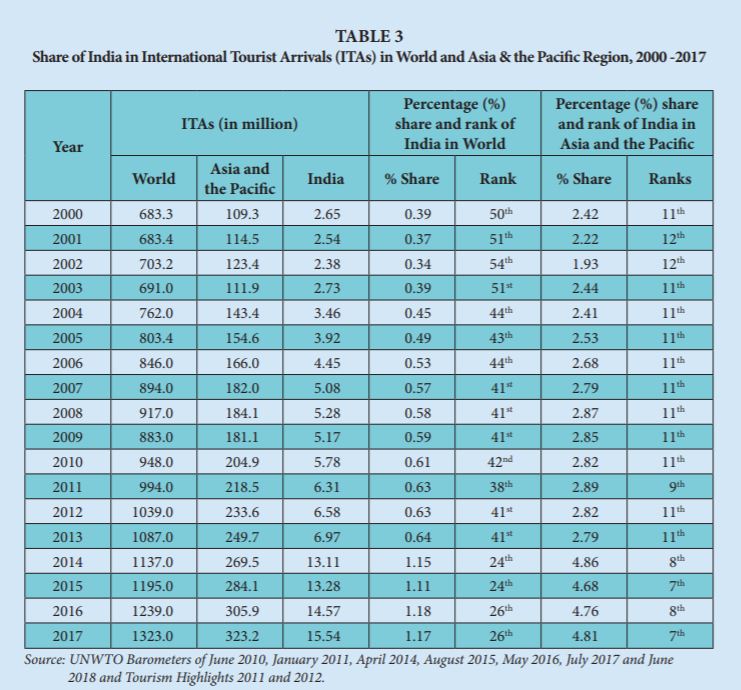 The share of India in International Tourist Arrivals (ITAs) has also remarkably improved. In the period from 2004 to 2013, it hovered around 0.4% to 0.6% but from 2014 it is steadily increasing and is currently at 1.17%. This shows that not just the absolute number of tourists visiting India has increased but also a growing percentage of International Tourists are now considering India as a tourist destination over other countries. In the Asia Pacific region, India’s rank has improved from earlier 11th in the pre-2014 years to 7th in 2017 attesting to the fact that there has been a robust growth in the Tourism sector since 2014.

It, therefore, becomes a bit ironical when Congress handle on Twitter urges people to make a voluntary contribution to them so that they can enjoy the benefits of better economy and better holidays. Embroiled in scores of corruption scandals, tourism was manifestly lower on the priority of the Congress government.

Your best holiday is yet to come.
With a better economy, comes bigger and better holidays. A small contribution will help us do that for you.
Click here:https://t.co/mw6l9E6lQF

The reality as evident from the facts is that Tourism in the country is growing at an unprecedented speed. The country has improved in almost all parameters concerning Tourism. A slew of measures has been adopted by the Modi government to uplift the sector. Rural sites in various states are identified and are being developed as a boost to rural tourism. The government has also launched Swadesh Darshan for integrated development of tourist circuits based on various themes.

Massive cleanliness drives have been initiated under the Swachh Bharat Mission to preserve and protect the heritage sites. Toilets are being developed at places of tourist significance. The central government is also financing state governments to restore the sanctity of places of cultural and religious significance that can be turned into major tourist hubs.

The recent inaguration of the Statue of Unity, world’s tallest statue, a tribute to Sardar Patel on the banks of the Narmada in Gujarat is another testimony to the government’s vision to ensure growth in the tourism sector. Within just 10 days of inaguration, the monument had attracted over one lakh visitors, earning over Rs 2 crores.

Modi had realised it a long time back that Tourism is one of the most important levers which when pulled rapidly ushers a country into the era of development. This is one of the reasons why he had reprioritised and calibrated the government policies to aid Tourism, which was visibly languishing under the Congress-led UPA regimes.

The analysis of tourism data over the years makes it evident that Indians do not need to donate to Congress to be able to enjoy better holidays, or is it possible that the Congress Twitter handle meant holidays for their party president and not all Indians, that is, in fact, more likely because Rahul Gandhi is well known for his numerous holiday trips.