Congress leader Hardik Patel claims China has abducted the crashed AN-32 plane, urges PM Modi to do surgical strike to bring back the soldiers

If one goes by the Congress leader's Tweet, Arunachal Pradesh which is very much an integral part of India suddenly becomes a part of China 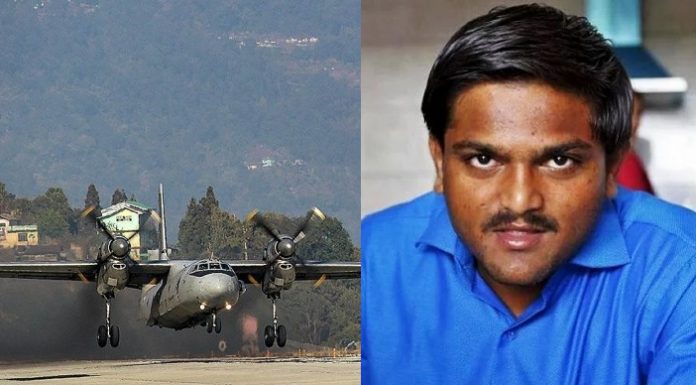 A team of Indian Air Force (IAF) have come across the wreckage of the IAF jet AN-32 today that went off the radar on June 3, while there still isn’t any confirmation of the 13 personnel who were travelling from Assam’s Jorhat Mechuka Advanced Landing Ground in Arunachal Pradesh when it went missing around 12:25 pm, half an hour after it took off.

Though the IAF confirmed that debris of the jet has been spotted 16 kilometres north of Lipo in Arunachal Pradesh, Congress leader Hardik Patel, who seems to be on his own trip, claimed that China had seized the Indian jet and its passengers.

In a tweet, the convicted felon and the Congress leader, Hardik Patel claims that the AN-32 and the 13 personnel travelling in the plane are with China. Condemning China suggesting that they have abducted the plane, Hardik urged them to return our jet and passengers. He has also asked PM Narendra Modi to conduct a surgical strike on China and get back our officers.

What is amusing here is that Hardik in his urgency to take a dig at Modi forgets that he was demanding a surgical strike for technically an ‘accident’. Moreover, it is interesting to note here, that if one goes by the Congress leader’s Tweet, Arunachal Pradesh which is very much an integral part of India suddenly becomes a part of China.

Not coming as a surprise though, the Congress leader here spoke much in the lines of China, who have claimed the Indian state of Arunachal Pradesh to be a part of China and has depicted it on its official maps as a part of south Tibet Autonomous Region (TAR). They regularly refuse visa to residents of Arunachal travelling to China, saying they do not require visa to visit their own country.

Meanwhile, taking to Twitter, the IAF informed, “The wreckage of the missing #An32 was spotted today 16 Kms North of Lipo, North East of Tato at an approximate elevation of 12000 ft by the #IAF Mi-17 Helicopter undertaking search in the expanded search zone.” The force added that “efforts are now continuing to establish the status of occupants & establish survivors”.

The wreckage of the missing #An32 was spotted today 16 Kms North of Lipo, North East of Tato at an approximate elevation of 12000 ft by the #IAF Mi-17 Helicopter undertaking search in the expanded search zone..

Recently, Hardik Patel was dealt with a severe blow in his political aspirations when the controversial Patidar leader was barred under the Representation of People Act, 1951, from contesting the recently concluded Lok Sabha elections.

He had led the Patidar agitation in Gujarat in 2015 bringing the State to a standstill to demand reservation for Patidars. Around 9 people had lost their lives in the ensuing violence and the Army had to be deployed to take control of the situation.

Last year in the month of July, a Sessions Court in Visnagar had found Patel guilty of causing a riot in Mehasana and sentenced him to 2 years in prison. He was convicted of offences of arson and creating ruckus at the office of BJP MLA Rushikesh Patel. Out of 17 accused, only three were found guilty by the court including Hardik Patel. Apart from the jail term, they were also fined Rs 50,000 each. But the court had granted them bail against bonds of Rs 15,000.

Other than the riot case where he has been convicted, Hardik Patel is also facing a sedition case in Gujarat which carries the maximum punishment of life imprisonment. The case was filed after he had called for ‘killing cops’ in 2015. A case of insulting the national flag was also levelled against him, which was later withdrawn.