Koneru Krishna is a Zilla Parishad vice-chairman and is also the brother of Kagaznagar MLA Koneru Konappa. 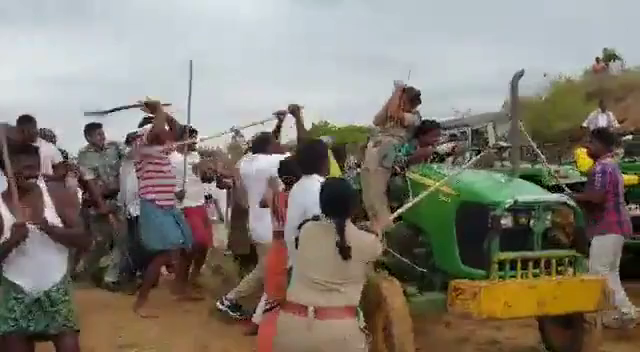 A female forest officer in Komaram Bheem Asifabad district in Telangana was attacked with sticks by a group of Telangana Rashtra Samithi (TRS) members today. The men were allegedly led by TRS leader Koneru Krishna.

#Anitha, #forest range officer, kagaznagar being attacked by koneru krishna and his goons. Krishna is the vice chairman of zilla parishad and the brother of koneru konappa, the #trs mla from #sirpur. pic.twitter.com/4TqiMPvm5M

In the video shared on social media, the officer, Chole Anitha, can be seen standing on a tractor while a group of men holding wooden sticks surround her. They start attacking the vehicle and one of them hit Anita as well, fracturing her right hand. The injured officer is currently being treated at a hospital.

In a video taken at the hospital, Anita had named TRS leader Koneru Krishna Rao as the one who attacked her and led the mob. Krishna is a Zilla Parishad vice-chairman and is also the brother of Kagaznagar MLA Koneru Konappa.

Reportedly, Anitha along with her staff went to Sarsala forest village with tractors to plough 20-acre land for Harita Haaram, a mass tree plantation programme. This was a mandatory afforestation programme to compensate for the loss of forest land due to the government’s flagship Kaleswaram multipurpose irrigation project.

When she had ordered her staff to start the work, a few villagers of Sarsala arrived in a mob and started using filthy language and also attacked the officer. She alleges that Krishna Rao had dragged her by the hair. She then climbed the tractor to escape after which she was attacked by sticks. As per reports, an official letter of the Forest department clearly mentions Koneru Krishna as the one who led the attack.

While responding to the allegations Krishna said, “Forest department is terrorising the aboriginal adivasi farmers and confiscating their land forcefully. I was there to resolve the issue and to ensure justice for tribal as forest officials were destroying crops in the name afforestation. I tried to pacify department authorities but in vain, the attack was accidental action not intentional.”

The state government has taken serious note of the attack. Several men including TRS leader Krishna have already been booked. District superintendent of police Malla Reddy visited Anitha at the hospital and assured her of stringent action against those responsible.

There have been several reports of mob violence recently. Two days ago, in Uttar Pradesh, a Muslim mob attacked Dalits inside a temple for playing bhajans on the loudspeaker. In Mirzapur, a mob beats up a young man while he was going to the temple.