Watch: One of the convicts in the 2013 Gudiya rape case in Delhi attacks female journalist in courtroom

Additional Sessions Judge Naresh Kumar Malhotra today convicted them saying that the case had shaken the society’s “collective conscience”. The court will announce the quantum of punishment on January 30. 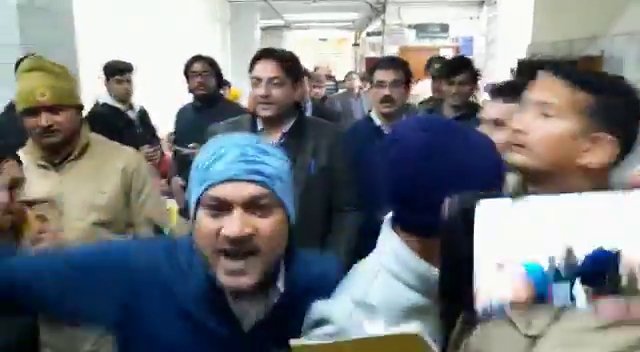 In a video which is being shared widely on Twitter, a convict in the 2013 Gudiya gang-rape case in Delhi was seen attacking an India Today journalist and another outside the Karkardooma court in New Delhi today.

The visuals of the incident show the convict, in a blue jacket, first attacking a female journalist who was video recording the proceedings on her mobile, thereafter attacking another journalist, while coming out of the courtroom after hearing. The convict also tries to snatch the mobile phones of journalists on the way out of the court.

And these are the men who tried every trick in the book to play the system… delayed the trial. Convicted for raping and sodomising a 5-year-old girl today, they attacked the journalists in court #Gudiya pic.twitter.com/tgDPywpJh4

A Delhi court found two accused Manoj Kumar and Pradeep guilty of gang-raping a 5-year-old girl (named by media as Gudiya) in the year 2013 in Gandhi Nagar area of New Delhi. Additional Sessions Judge Naresh Kumar Malhotra today convicted them saying that the case had shaken the society’s “collective conscience”. The court will announce the quantum of punishment on January 30.

“Collective conscience of the society shaken. In our society, minor girls are worshipped as goddesses,” the court set up under the Protection of Children from Sexual Offences Act (POCSO) said, furthering: “The child, who was just five years old, experienced exceptional depravity and extreme brutality.”

On April 15, 2013, convicts Manoj Shah and Pradeep Kumar had abducted and brutally raped the child in a locality in east Delhi. They had fled after committing the crime, leaving the victim at Manoj’s room believing her to be dead. The minor was rescued after nearly 40 hours on April 17, 2013.

Shah was arrested in Bihar’s Muzaffarpur city, while Kumar was arrested from Darbhanga in the same year. The chargesheet in the case was filed on May 24, 2013, and the court framed charges against them on July 11, 2013.

In 2014, one of the accused, Pradeep, had moved the court claiming he was a juvenile at the time of his arrest. The high court had in 2018 declared that Pradeep was not a juvenile and sent him to trial before the sessions court.

This incident had occurred merely four months after the 2012 Delhi gangrape and murder case and fuelled widespread outrage.