Asaduddin Owaisi has disassociated himself from the comments made by Amulya. He condemned the Pakistan Zindabad slogans and said that the girl was not with them. 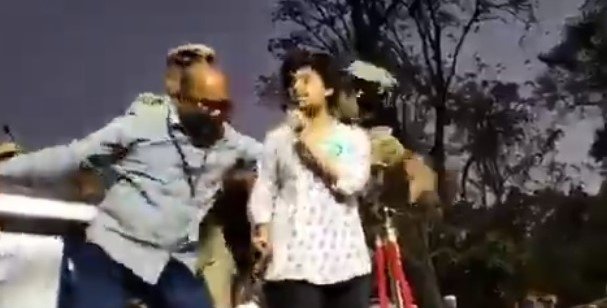 A ruckus erupted at AIMIM Chief Asaduddin Owaisi’s rally against the Citizenship Amendment Act and NRC in Bengaluru on Thursday. Leftist named Amulya burst into the stage while Asaduddin was present on it. She raised slogans of ‘Pakistan Zindabad’ and was attempting to say something when she was dragged off the stage by those present. It is unclear precisely what she wanted to say as she was removed from the stage before she could complete her sentence.

The woman, identified as Leftist Amulya Leona by The Quint, was saying “The difference between Pakistan zindabad and Hindustan zindabad is…” before she was dragged off stage by the Police and those present in the venue. Prior to this, she had chanted Pakistan Zindabad slogans on stage. However, she could not stay long enough to complete her sentence as Owaisi intervened immediately.

Asaduddin Owaisi has disassociated himself from the comments made by Amulya. He condemned the Pakistan Zindabad slogans and said that the girl was not with them.

This is the second controversy Owaisi finds himself in within a week. Only on Sunday, Waris Pathan had resorted to inciting Muslims in Owaisi’s presence by stating that time has come for the Muslims of the country to unite and ‘achieve freedom’. He added that even though Muslims are just 15 crores in the country, they can still dominate over 100 crore Hindus.

Asadduduin Owaisi, AIMIM, in Bengaluru: I condemn this statement. The woman is not associated with us. Humare liye Bharat Zindabad tha, zindabad rahega. pic.twitter.com/DMe4Zvsc9L

Amulya Leona appears to be the same Amulya Leona who was part of the group that had heckled journalist Mahesh Vikram Hegde at an airport in January. They had attempted to coerce Hegde into singing “Vande Mataram” and prove his patriotism “for the country”. One of the women had called him a member of the “nationalist gang”. The group was lionized by the liberal camp who justified heckling those with different political opinions in public.