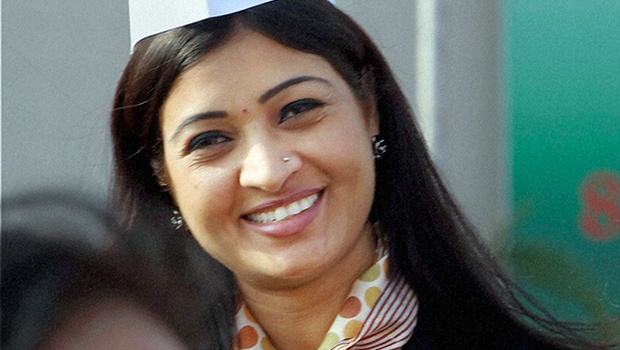 Last night, A major fire had broken out at a closed shop and later spread to others in the Moti Bazar area of Chandni Chowk. This resulted in 11 fire tenders being rushed to the spot to control the fire. Being the local MLA, Alka Lamba too reached the spot to take stock of the situation.

According to reports rather than stepping aside and letting the firemen do their work, she ended up causing a delay of about an hour. Media reports claim that the area where the fire had erupted was very congested and the fire officials were as it is facing troubles in bringing in the vehicles.

Alka Lamba then reportedly asked the fire department officials to bring down the crane which was being used in the rescue operations so that she could climb on it to go on top. Her actions reportedly angered local people, due to which she had to be taken away in a Delhi Police vehicle to save her from the people’s wrath.

A report by CNN-News18 claimed that about 40 shops were damaged due to the fire. The report put forth Alka Lamba’s version of events, where she claimed that she went there to make sure there was absolutely no delay in dousing of the fire. She also claimed that she was there to encourage the fire officials who were working there.

However, the same report report also stated that there was a delay of about an hour due to Ms Lamba’s actions and she has reportedly been summoned by Kejriwal to give an explanation.

But rather than feeling remorseful and expressing her profuse apologies, Alka Lamba today quoted the tweet of a news report covering the incident and reacted to it by putting three laughing out loud emojis:

Lamba did not explain what was she finding so funny about reports that she delayed rescue operations. She has not even claimed that her account was hacked, as has been done in the past by some of her senior colleagues.

Now her actions have prompted BJP leader Nupur Sharma to file a complaint against her for obstructing public servants from discharging their duties.

In the complaint addressed to the Delhi Commissioner of Police, Nupur Sharma has asked for a case to be lodged under the section 186 of the IPC, which carries a punishment of imprisonment of up to 3 months. She also called for a serious investigation into the possible delay and avoidable loss to property and lives (if any) Alka Lamba caused due to her stunts.