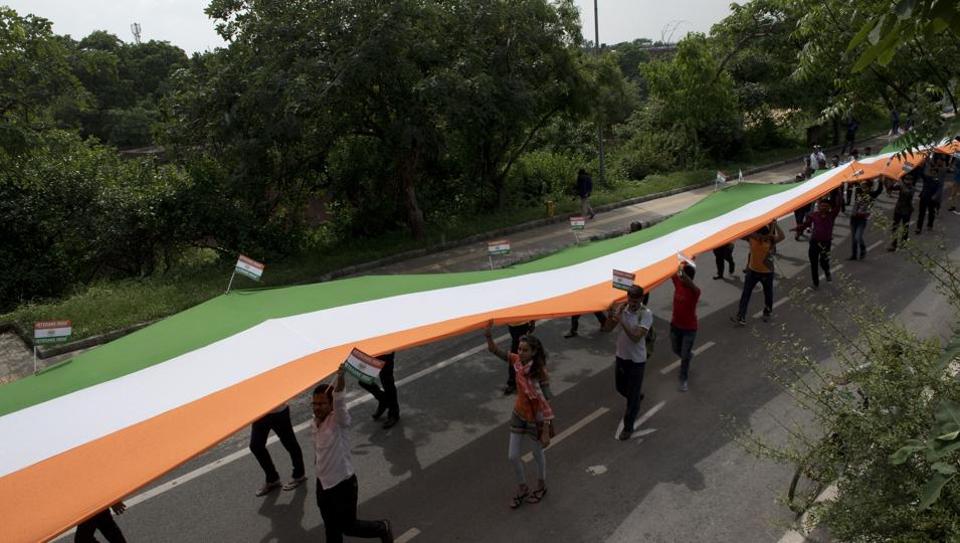 In a first, the Jawaharlal Nehru University or JNU celebrated the Kargil Vijay Diwas on Sunday. Various luminaries including MOS External Affairs Gen VK Singh, Petroleum Minister Dharmendra Pradhan, cricketer Gautam Gambhir, Maj Gen GD Bakshi were in attendance. The event also saw the presence of an army band and 23 families of Kargil martyrs were also felicitated during the course of it.

This was a kind of pre-celebratory event as Kargil Diwas actually falls on 26th July. The crowd which gathered there made sure that it became a festive occasion with a chanting of slogans like woh Kashmir humara hai, Jahan hue balidaan Mukherjee (Syama Prasad) and Bharat Mata Ki Jai among others.

The crowd, which later carried a 600 metre long National Flag around the JNU campus, termed it as a defeat of the anti-national forces and slogans like Naxalwad na Maowad, sabse upar Rashtrawad to rang around. Even Gautam Gambhir personally took part in the Tiranga march.

According to Saurabh Sharma, the vice-president of ABVP, the students body led the march along with Army veterans, JNU students and faculty. He also claimed that JNU was changing and that students were starting understand the meaning of true nationalism.

During the event, Gen VK Singh shared his personal experiences in the Kargil battle and Maj Gen GD Bakshi spoke about the Indian Army’s efforts in guarding the nation’s treacherous border with Pakistan in extreme weather conditions.

The VC of JNU, M Jagadesh Kumar appealed to the Union Ministers to help procure an army tank, which would be put on display inside the campus for reminding the students of the valour and sacrifices of the soldiers. Incidentally this demand was also made last year after the leftist students had organised a pro-Afzal Guru event on the campus.

Even though the event was grandly celebrated, there were some sore moments including the disgruntlement of some leftist students on the campus. JNU alumni Abhinav Prakash claimed that leftists students had openly boycotted the event and had even ridiculed the administration:

This was also reiterated in the HT report which carried a quote from Amal the vice-president JNU Students Union which is currently controlled by the Left unity alliance. This is what Amal stated:

They can hold their programmes and say what they wish but why have they been curtailing the voices of dissent. Each time we screen a film or hold an event that does not suit their agenda, they send notices to us. When we do not have a problem with them holding events, they why stop us? They call such events patriotic but they just use them as an opportunity to recruit people in RSS

So not only had the leftist organisation not participated in the event (and virtually termed it ‘their event’), they termed the event featuring families of martyrs and union ministers as opportunity to recruit people into the RSS.

Also, the statement about the leftists not having any problem which ‘the other side’ holding events, is clearly not true.

We had reported in the past how the leftists had forced Arvind Gupta the BJP’s digital campaign head from speaking at an event inside the JNU due to his ‘BJP connection’. The same leftists had also demanded a ban on Baba Ramdev’s entry into the campus in December 2015, and and had protested against the screening of the movie Buddha In A Traffic Jam that talks about ‘Urban Naxals’.