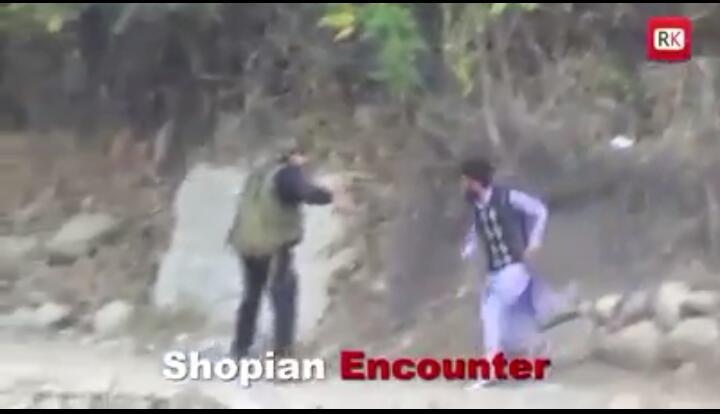 Three terrorists Zahid Mir of Ganowpora, Asif Ahmad Pal of Kathokalan and Irfan Abdullah Ganai of Heff village of Shopain were recently killed in a security operation inside house of a teacher, Aijaz Lone. Few days later, he was found dead with his throat slit, a note in Urdu and a mobile phone on him which said, “By the grace of Allah we have begun to take revenge, and we warn everyone that they must repent otherwise they will face the same consequences. We have information about all the informers of army and police and this must be seen as a final warning.”

Lone was mistaken to be an informer by the militants. Shockingly, his identity, whether he was an informer or not, was made public by Rising Kashmir, an English newspaper from Kashmir by posting a video of Lone escaping with help of an Indian soldier during the encounter.

The irresponsible journalism was called out.

Example of irresponsible journalism. The said newspaper got this person ‘identified’ before militants ‘eliminated’ him the following day https://t.co/acTVpbjwjn

One of the first lessons in journalism ethics: “we should be aware of the impact of our words and images on the lives of others.” https://t.co/MS6Ob7qbM3

While the video now seems to have been removed from all the digital platforms of Rising Kashmir, does that absolve Rising Kashmir from irresponsible journalism which may have led to identifying an individual, who was later killed by terrorists?

I am told Rising Kashmir has got this video deleted from its website and social media profiles. Will the law catch up? @spvaid @JmuKmrPolice https://t.co/B6Q9qaMzeE

This is not the first time media, in its mad rush for exclusives and TRPs, put innocent lives at stake. After the 26/11 Mumbai attack, the Supreme Court had pulled up the media for the live coverage which possibly helped the terrorists to continue the attacks for longer and kill more innocent people. One would expect Rising Kashmir to be little more responsible since they know how mistaken identity could get get innocent people killed.