Patiala House Court has admitted the Civil Suit for defamation filed by me on behalf of my client @TajinderBagga Ji against @RifatJawaid and has issued Summons. Criminal defamation case is listed in last week of January. My efficient junior Advocate Ms. Harpreet appeared for me. pic.twitter.com/o05FBJ0Se6

Molester and illiterate troll @TajinderBagga, these outlets too had their flashes ready in draft. Guess what your own Times Now too had flashed the same. https://t.co/HrdO6u5vU2 pic.twitter.com/VDcpDARzz1

Jawaid was responding to a tweet by Bagga where Bagga was mocking Jawaid as Janta Ka Reporter, the pro AAP website, had tweeted that Lalu Prasad Yadav, who was convicted in the fodder scam, was acquitted. 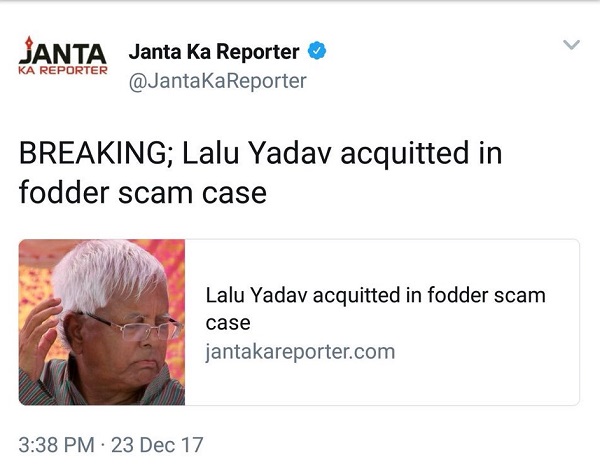 Bagga had mocked Jawaid for being in a rush to acquit Lalu.

This led to Jawaid losing all sense of public decorum and took personal potshots at Bagga and called him a ‘roadside and illiterate troll’.

That’s what happens when a roadside and illiterate troll is appointed as BJP spokesperson. Have somebody read this report for you. Can’t be blamed if you never made it to any school. https://t.co/HrdO6u5vU2 https://t.co/NBrv9Hz2zY

Following this altercation, Bagga asked whether Jawaid would use such derogatory terms for his father for pointing out his mistakes. Jawaid, in return, stood by his words and said that he would henceforth refer to Bagga as a molester and a criminal.

Aww. Felt hurt? That’s what you are. A molester and criminal. Be happy. From now on, that’s what you will be called. Respect di thi, hazm nahi hui. https://t.co/w9wWFjazqY

Accusing Jawaid of tarnishing his image, Bagga filed a complaint to Delhi Police Cyber Cell against Jawaid to file an FIR (first information report). A criminal defamation case has also been filed which has been listed in last week of January.