More
Home News Reports Whitewashing a crime - how exodus of Kashmiri Pandits is being blamed on Hindus...
News Reports
Updated: 22 May, 2018 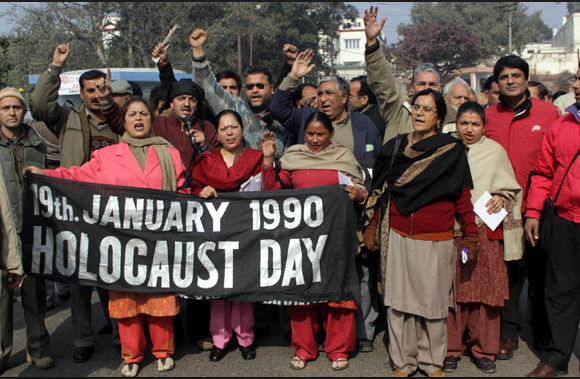 Repeat a lie often enough and it becomes the truth, said Hitler’s propaganda minister Joseph Goebbels. Though there are many opinions on who exactly said these words, the words are a depressing and scary reality. A blatant lie, often garbed in attires of nuance, perspective and doubt, often does end up becoming the widely believed truth.

We have seen how “brilliantly” and successfully the Godhra carnage that saw 59 Hindus, including women and children being burnt alive, was blamed on the victims themselves (turning it sometimes into accident, and sometimes saying they ‘provoked’ the local Muslims). How carefully orchestrated media propaganda, subtle wordplay and clever imagery managed to shift the focus from the brutal massacre to trivial issues over the years is perhaps one of the best examples of what repeating a lie can achieve.

Another such painful incident that is often turned, twisted and ignored to the extent of totally absolving the actual perpetrators of any wrongdoing is the exodus of Kashmiri Pandits. There have been denials, counter blames and facade of goal shifting over the years, not only by powerful politicians who were at the helm of governance but also by prominent voices in the media and society who frequently join the cause, the great cause of whitewashing of one of the most brutal stories of hatred, mass violence directed against a minority community in modern India, the exodus of Kashmiri Pandits.

Time and again politicians and media persons keep denying it and giving lame excuses. Political leaders have done it. Digvijay Singh had once stated that Kashmiri Pandits were unnecessarily forced to leave the Valley by Jagmohan and that Hindus and Muslims lived together for Centuries in Kashmir. The idea has long been propagated by the ‘liberal’ cabal. More recently, it surfaced again, with the same tones, that Governor Jagmohan was to be blamed for the exodus of thousands of Kashmiri Pandits.

This time it is columnist Tavleen Singh, who has spread fake photographs and wrong information about Yogi Adityanath earlier, and former Samajwadi Party leader and currently self-styled journalist Shahid Siddiqui who tried to weave their theory of exodus around then Governor Jagmohan.

While Tavleen stated that 300,000 pandits left the valley overnight because the governor could not control the violence, Siddiqui went a step further and stated that it was the Governor who ‘planned’ the ‘migration’.

Note the clever wordplay here, while Tavleen uses ‘left the valley’, Siddiqui uses ‘migration’. In a subtle way, the word ‘migration’ turns the forced exodus into a more docile, voluntary, even preferred travel from one place to another. One word, when repeated enough times, will make ‘exodus’ obsolete. That is how it works.

That is how it has worked in Godhra Massacre case too. Fortunately, there are people who have lived those times and experienced that pain. Social Media is a double-edged sword. The ideas were soon countered with arguments and recollections of people who have experienced the pain of the exodus, either themselves or through loved ones.

Not true at all. Jagmohan had just arrived in Jammu. He had not even reached Kashmir on January 19, 1990. That is when Farooq A was sulking and had not even transferred charge. There was no Govt visible. That night the exodus began after threats from mosques emanated. https://t.co/DEi1Aozb4N

Many Kashmiri Muslims have manufactured lies about Pandit exodus over last three decades and you (and others) continue to lap up the propaganda. If saving minority Pandits from Islamist onslaught is termed partisan, so be it. Kashmir not only political problem but also Islamist. https://t.co/afcz8mdjwL

Journalist and author Rahul Pandita explained the events related to Jagmohan and the exodus of Kashmiri Pandits in a series of tweets. He stated that on the night of the mass exodus, Governor Jagmohan was not even there in Srinagar. He was in Jammu.

Mosques in Shrinagar were openly calling for the killing of pandits, threats and attacks were underway and the situation was grim. By the time Jagmohan reached Srinagar on January 21, 1990, many had already left and those who had not, were leaving in groups slowly.

Pandita states that when a prominent Kashmiri Pandit leader HN Jattu wrote an open letter to militant leaders not to kill pandits, the JKLF had responded by killing his associate and dumping his body in a drain. He shared an excerpt with statements from Ghulam Mohammad Sofi, the editor of Srinagar Times, from 1997.

The killings happened in ones or twos, the threats were blared out from mosques. The fact that people do not leave their homeland hurriedly to live in refugee camps unless they are forced to do so, does not register with many.

There are several documented recollections and statements which emphasize the way the exodus began, the Pandits were being targetted and threatened long before they decided to save their lives and flee from an Islamist mob and apathetic state government.

As shared by writer and blogger Dimple Kaul, Ashish Nandy of the Centre for the Study of Developing Societies stated, “When Hindus began to be exterminated systematically in Kashmir and began to leave in large numbers, our secularist friends said then Governor Jagmohan had deliberately organised the forced migration. I would like to see people leaving their ancestral homes with a sack in hand just because the governor asked them to do so. When questioned later as to how the killings of Hindus were not condemned strongly enough, some of them said newspapers had refused to carry their statements.”

No exodus happens overnight. Hundreds of thousands of Kashmiri Pandits did not become refugees in their own country because a governor asked them to. Ex-Governor Jagmohan in his own words has recalled how bad the situation in Kashmir was when he was asked to and join there urgently. Even if one believes the secular argument for a moment and considers Jagmohan was responsible, why then the killings of Kashmiri Pandits continued through the 1990s and later? 23 pandits were massacred in Nandimarg in 2003. There were reports of how the massacre was aided by the local policemen who later tried to hush it up.

When one sees the adulation and coverage the slain terrorist Burhan Wani received by the media, it becomes easier to understand how brilliantly the story of Kashmiri Pandit exodus would have been ignored and whitewashed for all these years. Till date, media defends stones pelters and condemns soldiers who get injured trying to protect lives.

Kashmir is the centre of a thousand turmoils. There is article 370, terrorism, external interference and a dozen others. But at the base of all these lies one reason, radical Islamism. Blaming Jagmohan, blaming the army or anyone would not solve the issue. Kashmiri Pandits became refugees in their own countries because the state machinery could not tackle the radical elements. Kashmir will remain the centre of thousand turmoils till the root cause of radical Islamism continues to persist.

But as earlier noted by an article on OpIndia, this whitewashing is part of the larger attempt to rewrite history. To quote from the article and to modify it to suit this Jagmohan conspiracy and latest incidents:

“The Lutyens liberals grudgingly have to blame Jinnah for the 1947 partition, despite them wanting to blame only the RSS. They don’t want to blame any Jinnah again. So if and when Kashmir gets azadi, the blame shall rest entirely with the Hindus. From a Hindu Jagmohan to the ‘Hindu army’ that ties a Kashmiri Muslim to jeep.

Burhan Wani will be the Bhagat Singh in the history textbooks of Islamic State of Kashmir, and our Lutynes liberals are working towards the first draft of that chapter.”