More
Home News Reports Anand Ranganathan, who was bullied by journalists, hits out on them for 'vile slander...
News Reports
Updated: 15 June, 2018

Anand Ranganathan, who was bullied by journalists, hits out on them for ‘vile slander and propaganda’

Following the assassination of journalist Shujaat Bukhari, the so-called journalists took it upon themselves to shift the blame from terrorists to those who raise their voices against terrorism. Scientist and columnist Anand Ranganathan, who had recently spoken against the role of media, the fourth estate, on reporting on terrorism, in the valley as well as elsewhere, was single out and bullied for telling people like Bukhari to be little mindful of how reportage is taking place in media. However, the otherwise cool and composed Ranganathan lost his cool and hit out on the journalists for their ‘vile slander and propaganda’.

Saddened also because his tragic death is being used by many journalists to indulge in a sickening game.

Much against my wishes, it is important that they be countered, so that these hours be rather spent in remembering a journalist than in vile slander and propaganda. 2/n

Referring to these so-called journalists as ‘third-raters and psychopaths’, Ranganathan expressed shock that they would use the death of someone, their fellow journalist, for ‘sick and demented childish game’.

Frenzied trash, you neither scare me nor do you ruffle me with your vile cyber-bullying. You sadden me. For I realise that, despite your mediocrity & psychopathy, you are allowed to write columns and appear on TV. If this isn’t Incredible India, I don’t know what else is. 4/n pic.twitter.com/yXZrJIvKlG

He said that their slander does not bother him, but what saddens him is that they are considered opinion-makers, despite their ‘mediocrity and psychopathy’. He shared screenshots of Bukhari for which he had called him out on a stage earlier this week, where Bukhari seemed to be speaking on the lines of terror sympathisers. 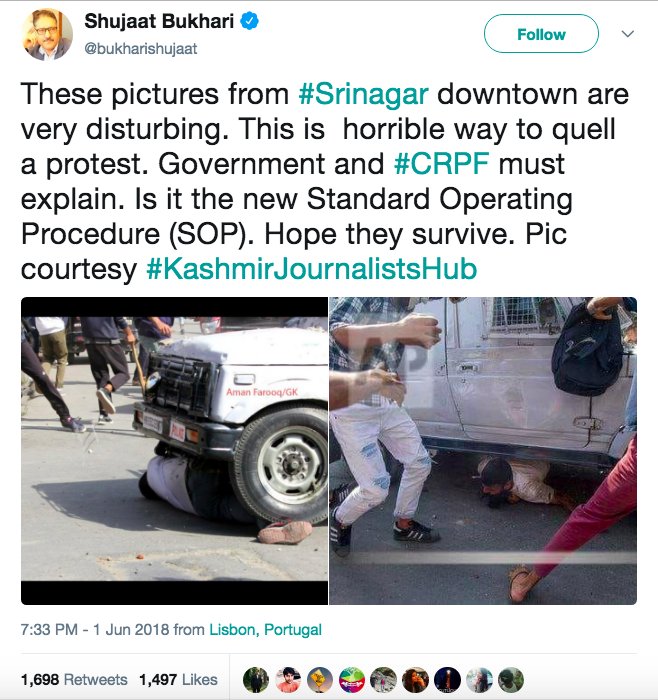 Stating that he does not believe in criminal defamation so he will not be taking legal action against those who insinuated that he is responsible for Bukhari’s assassination, he asked the ‘journalists’ to take their childish games elsewhere.

So. Mediocre, feeding-on-crumbs, psychopathic, otherwise unemployable trash, run along now and try your childish games somewhere else or I may be accused of body-shaming if I commented on the pitiful size of your brain. 7/n

He reminded these journalists on how to be a decent human being at a time when one of their own is assassinated.

Finally, I am very thankful to so many – SO MANY – who noticed what these psychopaths were up to and countered their slander and propaganda while I wasn’t on twitter to see their games for myself. Thank you SO very much. You give me strength. Indebted. n/n