‘Modi’s 35 Lakh yoga video’ story is proof that deep inside, some ‘journalists’ and politicians are just rumour mongering trolls In recent times, the so-called celebrity journalists have been very vocal about the fake news menace that has infiltrated the social media space. We had seen how some of them ‘appreciated’ and ‘welcomed’ the move that the government will crack down on those journalists who report fake news. While the circular issued by the then Minister of Information and Broadcasting, Smriti Irani, stands withdrawn, the so-called journalists are back to rumourmongering.

Recently, Prime Minister Modi was challenged by cricketer Virat Kohli to take up the fitness challenge. To that, Prime Minister Modi released his video, emphasising on the importance of including Yoga in daily life. As expected, people got curious about the details of the video. A very dubious sounding website, IndiaScoops has recently surfaced which published an article that Prime Minister Narendra Modi spent Rs. 35 lakh on his #HumFitToIndiaFit challenge.

The article was very widely circulated by the usual suspects. Among them were Congress MP Shashi Tharoor, who faces charges of abetment to suicide in his wife Sunanda Pushkar’s death.

20 crore rupees in ads for #YogaDay, 35 lambs for @PMOIndia‘s fitness video! Disgraceful. This government is all about smoke & mirrors. Hype is their substitute for hope — the hopes they have destroyed.https://t.co/vmYZINkRD2

Foreign Tour of 41 Trips for 52 countries in 4 years and spent more than 355 crores from Tax Payers Money.

While we are not aware of the actual amount spent, if at all, on the video, we tried to see whether the news shared by such influential people on social media was even true. Especially when this is the only website which claims such news, and this is the only blog which has been shared by everyone above.

So we did a bit of digging. Interestingly, the amount Rs. 35 lakh is not received in an answer to an RTI query, but ‘sources’ in the PMO who are ‘tightlipped’ but will, of course, speak to a website which was registered 66 days prior on 27th April 2018.

I’m asking the editor to poach IndiaScoops resources who have such highly placed sources in the PMO because clearly, despite debunking so many hit jobs against the government, we still don’t have such exclusive sources.

The person who created the website went for a premium account so as to mask their real identity. Very curious for a blog with about 10,000 likes on Facebook to spend so much and go to such length to hide their identity. What have they got to hide?

We then went to their ‘community’ page which shows which all posts they are tagged in. You know, to see if any verified page tagged their post and helped it make viral. We saw one post from March this year where FirstPost Hindi had tagged this page in a story they had done on … wait for it … Arshi Khan, Bigg Boss contestant.

We then went to the rating page, which showed a rating of 4.4 out of 5 stars. 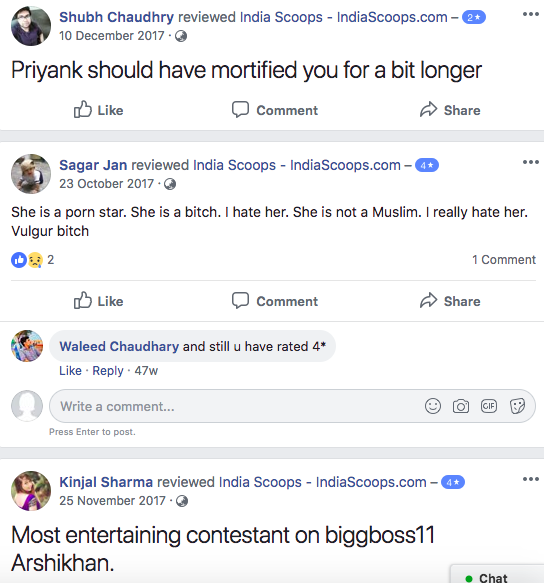 Till March this year, ‘IndiaScoops’ was an Arshi Khan fan page. So either the owners of Arshi Khan fan page became political bloggers suddenly or someone ‘bought’ their Facebook page so that they already have an existing fan base.

If this is true, Narendra Modi, Mr. Modi, you’re not only not bringing anything (of course a lot shame), but… https://t.co/8oBSknHatk

Hmm. While the name Zubair sounds familiar, I’m not able to place where I’ve heard it. Hmm.

The earliest mention of this website that we could find is by a Twitter handle ‘India Scribes Tv’.

IndiaScoops is run by one Flynn Remedios. In November 2010, a model and Kannada starlet had filed a case of molestation against one Flynn Remedios. She had also accused him of cheating her of Rs. 4 lakh. In 2008, model Sherlyn Chopra had filed a case against ‘freelance journalist’ Flynn Remedios who offered to become her public relations officer, for allegedly sending her outrageous SMSes. And recently, Remedios has described as Arshi Khan’s publicist. The same Arshi Khan whose Facebook page now became IndiaScoops.com page which has ‘exclusive sources’ in the PMO. Oh, and Arshi Khan and her publicist Flynn Remedios have been accused by one Pandit Ramesh Joshi of not returning the money she borrowed as well as of sexual harassment.

It is thus intriguing that an erstwhile Arshi Khan fan page got an exclusive scoop from sources within the Prime Minister’s office, published a report that hardly got any traction, got shared by a troll called Zubair, and then, got picked up by Congress politicians, AAP politicians, more trolls and trolls masquerading as journalists. And that ‘journalist’ with exclusive sources within the PMO turns out to be a publicist for a reality show actor and has questionable credentials.

This begs an important question: Deep inside, are these politicians and “journalists” just rumour mongering trolls?

Former Indian cricketers Harbhajan Singh and Yuvraj Singh are voicing their support for the Shahid Afridi Foundation despite the fact that the Pakistani cricketer on numerous occasions has made crass remarks about India and Hindus.
Read more