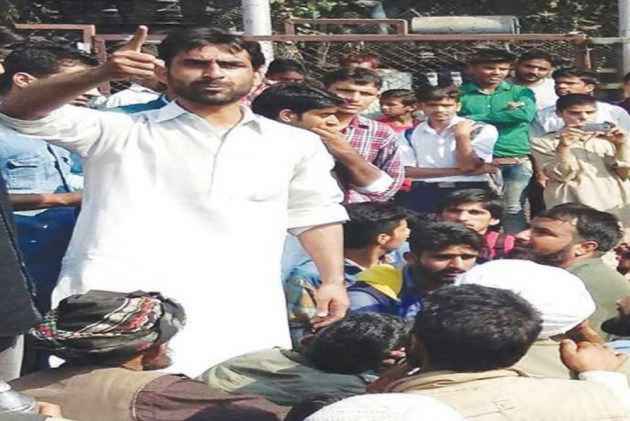 Talib Hussain, a “social activist and advocate”, who rose to prominence after leading an agitation seeking justice for an eight-year-old girl brutally gang-raped and murdered in Kathua district of Jammu and Kashmir earlier this year, ironically, has himself been arrested on rape charges and illegal possession of a weapon, police said on Wednesday.

He was arrested following a complaint, lodged on Tuesday by his cousin, who was allegedly raped by him one and a half months back in Chawda forest.

According to the complaint filed by this women, Hussain armed with a knife, intercepted her, clobbered and raped her while she was in the forest to graze her cattle. She, however, remained silent all this while as she was continuously threated of dire consequences by Hussain, but eventually, she broke her silence and confessed of being raped to her husband on Tuesday, following which she lodged a complaint at the Samba police station in Jammu, and subsequently, Talib was arrested from Tral in south Kashmir.

A case has been registered against him under section 376 (rape) of Ranbir Penal Code (RPC) and 4/25 Arms Act.

The rape charge came nearly a month after Talib’s estranged wife got an FIR registered at Samba police station, accusing him of domestic violence and attempting to kill her over dowry. According to the police, Nusrat Begum, married to Talib, for three years, having two children with him, went with a written complaint along with court orders to the police station along with her father, Mohammad Tahir and nearly a dozen neighbours.

Talib Hussain’s brother too had been booked for molestation and having common intention to intimidate Nusrat Begum.

Not very long back Talib Hussain was seen actively leading the fight for justice for the Kathua rape victim. In fact, his proactiveness and dedication to seek justice for the victim had earned him a title of a ‘Braveheart’ for standing tall to fight the barbaric injustice even as political parties played the blame game. As many media houses were tirelessly glorifying Talib Hussain’s prodigious efforts in the Kathua murder case, Opindia had briefly given a sneak peek into Talib Hussain’s past.

Talib Hussain had allegedly attempted to murder a scholar of Jammu University, Kapil Shastri on September 13, 2013. There is FIR No. 226/2013 against him: Talib Hussain V/s 307, 147, 148 Police Station Gandhi Nagar. He is facing trial at Sessions Court Jammu. He was also expelled from Jammu University after an Inquiry Committee found him “guilty”.

This is a matter of sheer hypocrisy that the man who left no stone unturned to fight for a woman’s justice and rights, standing up against atrocities committed against them, has himself been engaged in domestic violence- abusing a woman, mentally and physically assaulting her in the past and now has taken a step further committing the same ghastly crime against which he was proactively crusading.