Congress including their media friends had alleged that Alok Verma is being removed because he was initiating a probe against Rafale. However, these were wishful speculations by vested interests. The Rafale case got a clean chit by the Supreme Court and legally, the CBI cannot initiate a probe against a Defence Deal.

A day after CBI director Alok Verma resumed his duties after Supreme Court had reinstated him putting aside the decision of the union government to send him on leave, the high powered committee constituted to look into his fate has decided to remove him from the post. Now, news has emerged that CBI might file a corruption case against ousted CBI boss Alok Verma.

We reported how Mr Nageshwar Rao has now taken over the responsibility as the Director of CBI. 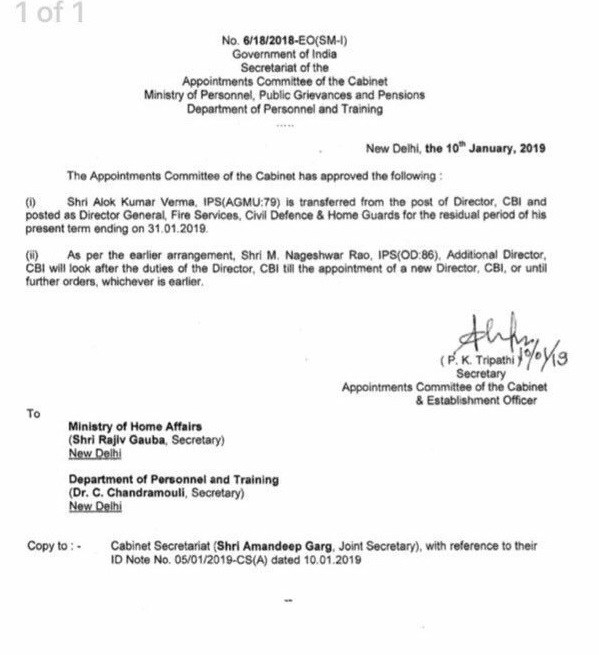 Now, Republic TV has reported that the CBI headed by Nageshwar Rao is all set to file a corruption case against Alok Verma.

The High Powered Committee comprising of Prime Minister Modi, LoP Mallikarjun Kharge and Justice Sikri have decided that the allegations against Alok Verma are serious. The charges against him are that of blocking investigation and that of accepting bribes to the tunes of Rs. 2 crores.

There were eight counts of charges against him in the CVC report presented before the Committee also comprising Leader of Congress in Lok Sabha Mallikarjun Kharge and Justice A K Sikri, appointed by Chief Justice of India Ranjan Gogoi as his nominee. The decision for the removal was taken by a majority with Kharge opposing the move.

Congress including their media friends had alleged that Alok Verma is being removed because he was initiating a probe against Rafale. However, these were wishful speculations by vested interests. The Rafale case got a clean chit by the Supreme Court and legally, the CBI cannot initiate a probe against a Defence Deal.