SC verdict on Rafale deal: Read scathing comments made by Court while dismissing petitions for inquiry

While Rahul Gandhi and the members of his coterie have been screaming "chowkidaar chor hai" based on their perception, the court has dismissed the fear-mongering around this essential defence deal and chosen to uphold national security over the opposition's petty politics.

The Rafale deal which is an inter-governmental deal between the government’s of India and France for 36 Rafale fighter jets in flyaway condition has been in the eye of the storm for a rather long time. The opposition has used this necessary defence deal to train its guns against the Narendra Modi government to insinuate a scam and perhaps, drag the Prime Minister’s reputation to the same level as out-on-bail Rahul Gandhi.

In the past, there have been several explanations provided by Dassault Aviation, the Indian government, the French government, fact-checks and comments by experts to explain how no scam exists in the Rafale deal. The opposition, however, was undeterred.

Congress friendly career PILists like Prashant Bhushan and others filed a PIL in the Supreme Court asking the SC to intervene and order a court-monitored probe into the deal.  The SC today dismissed the petition and made some interesting comments in the process. Some of the comments vindicated what the counters to the opposition had been asserting for a long time, others were scathing in its own right.

First and foremost, the Supreme Court, in its Rafale judgement, confirmed that during the Congress regime, no final result was reached in the Rafale deal. Congress got an in-principle approval from Indian authorities, but the deal was only in the negotiation process. Hence, Rahul Gandhi’s rhetoric about how Congress wanted to buy 126 jets and BJP wants to buy only 36 doesn’t hold water. In fact, even in the judgement, it has been written that Congress was planning to buy only 18 jets in flyaway condition.

An interesting point that is made evident is that one of the petitioners, Vineet Dhanda, filed the petition “after reading newspaper articles and reports”. He had earlier been rapped by the SC in the PNB scam case and the court had questioned his motives. Just like Prashant Bhushan, Dhanda seems to be a career PIList, albeit, less famous.

The SC in the Rafale judgement observed that the extent to which the court can review procurements, contracts etc would depend from case to case and the decision has to be made keeping the confines of National Security in mind The court observed that because of the ever-changing parameter on the basis of which the court can decide whether to intervene or not, the court had asked the government to apprise the court of the procedure. Interestingly, SC has reasserted that the allegations made by the petitioners were inadequate. After asserting that none of the petitions actually questioned the need for the Rafales but questioned the procedure of procurement, the court points out why, according to the government, the deal for 126 aircraft could not go through.

The government has asserted that the man-hours taken by HAL to produce the aircraft were 2.7 times higher than the French side. The HAL argument was raised by Rahul Gandhi over and over again to insinuate that the Modi government and even the PM personally deprived HAL of the contract for ulterior gains. The government has also stated that Rafale was required to take contractual responsibility for the aircraft produced by HAL and Rafale was not willing to do so. This delay was not serving India’s defence capabilities as the enemy nations had already upgraded their defence system. Essentially, the government has asserted that the delay caused during the Congress regime cost India in terms of defence preparedness.

The government also said that it is because of this stalemate that the Congress regime negotiation had to be cancelled. The government had informed the court after the formation of Indian Negotiation Team which commenced in May 2015 and continued till April 2016, a total of 74 meetings were held including 48 internal INT meetings and 26 external meetings between INT and the French side. The government has asserted that the terms the INT negotiated were far better than the MMRCA terms (Congress regime negotiations) and then, CCA approval was also taken for it. 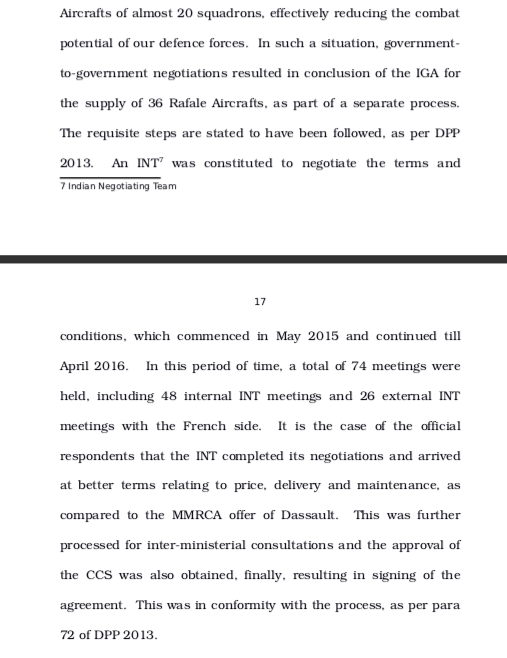 Point 22 of the judgement is extremely crucial. The Supreme Court has observed that after going through all the material carefully and after interacting with several airforce officers, there is no occasion to doubt the process. In fact, in the judgement, the court has mentioned that it has even gone through material etc regarding the pricing of the deal. 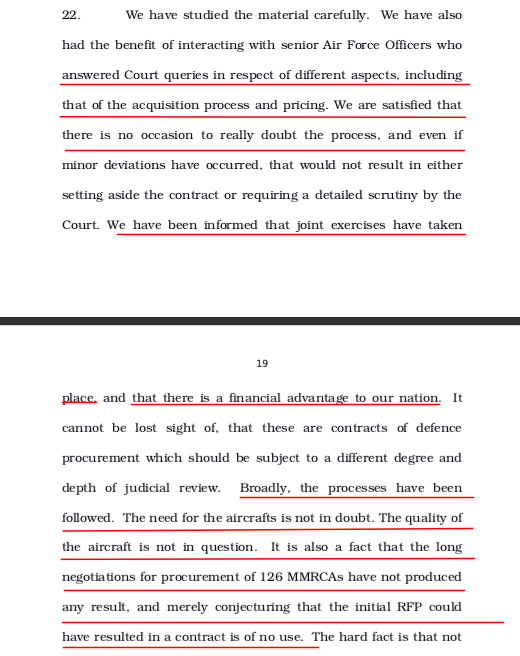 The court has said that broadly the processes have been followed and that the long negotiations in the MMRCA (Congress regime negotiations) did not procure any results.

The court also said that the wisdom to cancel the defunct MMRCA cannot be questioned since our defence capabilities were being diminished after our enemies have acquired 5th generation aircrafts and we had none. The court also observed that they are not going to demand clause by clause compliance and that the petitioners did not raise a stink earlier but only after Hollande’s statements.

Another big revelation in the judgement was that the government did share the pricing details with the court. 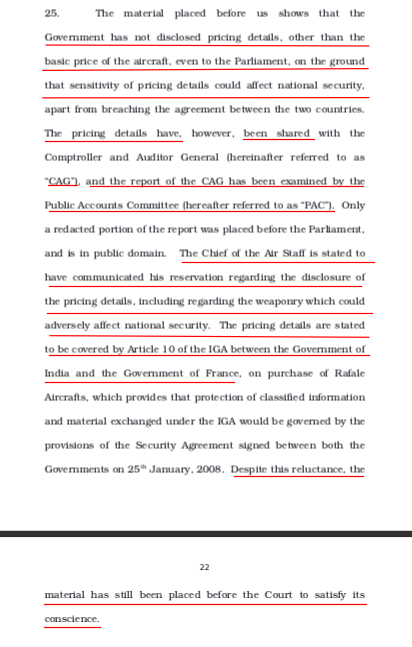 The Rafale judgement, in para 22, states clearly that the pricing is not in the public forum (other than base price) even though the petitioners based on news articles have asserted escalation of price. The pricing has been shared with the CAG and the CAG report has been examined by the PAC. The Chief of Air Staff too said that sharing the pricing would result in a breach of national security and that the pricing details have been mentioned in Article 10 of the contract between India and France. In the end, the court says that “despite this reluctance, the material has still been placed before the Court to satisfy its conscience”.

The Court was slightly on the secretive side while talking about the pricing, obviously, for national security concerns. The court, however, did say that it was compared the price of the previous deal and current deal and suffices to say that the official respondents say there is a financial benefit to the country.

With respect to the off-set clause as well, the court made some scathing observations. 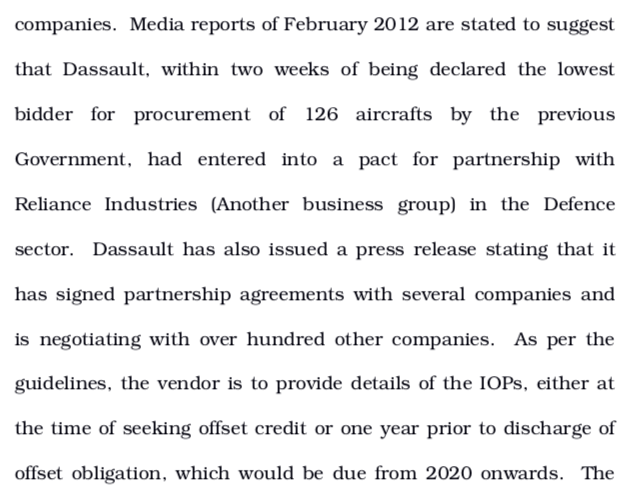 First, the court also takes cognisance of the fact that even in 2012, Dassault had entered into a pact for partnership with Reliance Industries. This was reported by OpIndia extensively.

Next, SC observes that despite the clause that says OEM will be free to select Indian offset partner, the petitioners kept emphasising that the French Government had no say in the matter. They have also stated that Dassault had no reason to engage with Reliance since it was incorporated only in 2015 and thus, the government gave benefit to Reliance by depriving HAL. The court also observed that even earlier in 2012 Dassault got into a partnership with parent company Reliance and what transpired within the company is of no consequence. The Court held that seemingly, the Indian government had nothing to do with the commercial aspect and the. In fact, it has been stated that the role of the Indian government comes only when the vendor submits a formal proposal, which has not happened yet. 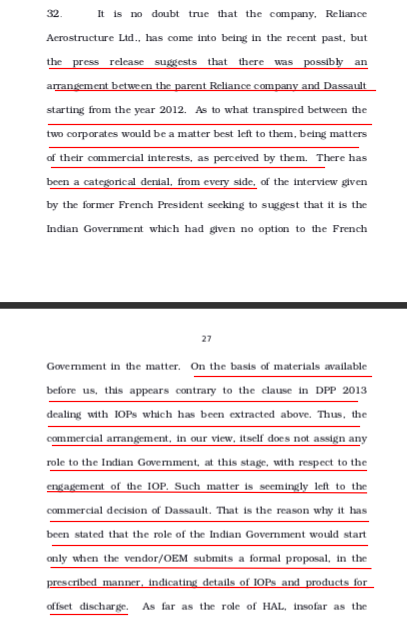 With respect to the role of HAL, that even Rahul Gandhi had spoken oodles about, the court was rather categorical in its observations. The court said that no specific role has been envisaged and that even earlier, there was friction between Dassault and HAL and Dassault was circumspect about tying up with HAL.

The SC in its Rafale judgement then made scathing observations. The Court said that “mere press interviews or suggestions cannot form the basis for judicial review by this Court”. The court said that there is “no material on record to show that this is a case of commercial favouritism to any party by the Indian government” to choose offset partner. 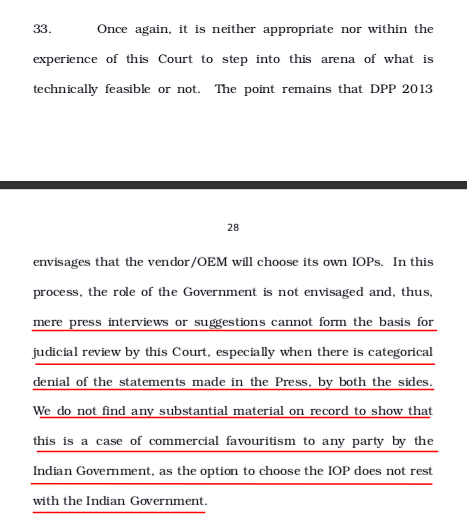 In conclusion, the court in its Rafale judgement has dismissed all petitions asking for an inquiry into the deal. Perhaps the most scathing comment made by the Court is in the conclusions of its Rafale judgement that would ideally end the debate over Rafale.

Perception of individuals cannot be the basis of a fishing and roving enquiry by this Court, especially in such matters.

While Rahul Gandhi and the members of his coterie have been screaming “chowkidaar chor hai” based on their perception, the court has dismissed the fear-mongering around this essential defence deal and chosen to uphold national security over the opposition’s petty politics.