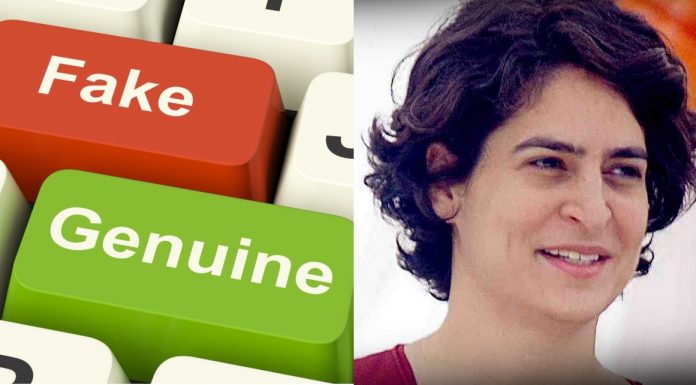 While the BJP criticised the move as another example of dynastic politics in the Congress party, an extremely jubilant mood was seen among Congress workers and a section of pro-Congress media.

Several op-eds were written in media claiming how the entry of Priyanka Gandhi Vadra can revive the fortunes of the Congress party, she was showered with attributes like classy, smart, charismatic, aggressive, Congress’ Brahmastra and so on. Several people noted that her resemblance to Indira Gandhi will also be beneficial to the party.

Amid this cacophony, a newspaper clip went viral on social media. The article printed in a newspaper reports the elevation of Priyanka Gandhi Vadra with a rather unusual headline, “Rajiv Gandhi’s daughter joins family firm”.

At the bottom of the image, the “Press in Newzealand has nailed it..!” is written in red colour, informing that this is a newspaper from New Zealand. The image of the newspaper was widely circulated on social media sites, including WhatsApp.

But is the clip referring to the Congress party as ‘family firm’ true? We have seen several cases of fake newspaper clips circulated on social media. Therefore, we decided to check if this particular news item was genuine or fake.

This is how, the New Zealand press reacts after the relaunch off Priyanka in Cong. pic.twitter.com/m1GZaNn2Ss

This forward was also doing the rounds on WhatsApp.

When we did a web search using the text seen in the clip, we found a positive result, which means the news item is not fake. The news item with that headline was indeed published in The Press, a newspaper published from Christchurch, New Zealand. The Press is the highest circulated newspaper in South Island, which is the largest landmass in the island nation.

Although the digital version of the newspaper can be viewed only with a paid subscription, a text version of the news item can be found on Pressreader, a digital media distribution house. Pressreader has agreements with over 6,300 newspaper and magazine publishers from around the world and the market, sell, print their publications around the world and over the internet.

The news about Priyanka Gandhi Vadra’s appointment was published with the headline “Rajiv Gandhi’s daughter joins family firm” on page 16 of the January 25, 2019 edition of the newspaper.

Therefore, the newspaper clip circulating on social media is genuine, The Press indeed referred to the Congress party as the family firm of the Gandhi family.

But why would a newspaper from New Zealand choose such a headline? When we researched further, we found that actually The Press had picked up the news item from a report published on January 24 in The Daily Telegraph from the UK (United Kingdom), including the headline. The headline used by The Daily Telegraph for a report written by Rahul Bedi was “Rajiv Gandhi’s daughter joins the family firm to help oust Modi”.

We have written ‘was’ because The Daily Telegraph has changed the headline of the report now, which can be read here. But the e-paper version of the report still carries the original headline, a screenshot of which is given below.