We must remember that Kashmir to India is not what Gaza is to Israel. The state of Jammu and Kashmir is and will remain an integral part of India.

In the state of Jammu and Kashmir, we are battling a multi-pronged hybrid war against terror. Thirty years of bloodshed and still a clear path towards peace and stability in the region is far from sight. As we have seen in the recent decades that most of the modern battles have been hybrid in nature so is the Proxy War of Kashmir. It shows the multidimensional nature of modern military missions. Syria, Afghanistan and Iraq are class examples of the western world’s ‘hybrid war’ or ‘three blocks war’ concept being put into action in the war against terror.

The Indian Army’s much-praised initiative ‘Operation Sadbhavna’ combined with ‘Operation All Out’ and simultaneous Disaster Relief Operations is one such successful implementation of the ‘Three block war’ wherein, the Armed forces are fighting in Block One, while simultaneously helping secure, stabilize and nation-build in Block Two, and all the while, you are also helping people through disaster relief, humanitarian assistance and peacekeeping in Block Three to try and win the hearts of common Kashmiri people and to create an atmosphere of harmony amongst all, ever since the year 1998.

It can be said without twitching an eyelid that the Indian Army’s Operation Sadbhavna is the best humanitarian aid for the terror-stricken people of the valley. The olive branch extended by Operation Sadbhavana rates amongst the best humanitarian aid and nation-building operations ran by any military in the world but, is not found sufficient. The humbling efforts, by the uniformed men and women, are winning hearts, but people are still being radicalised, stones are still being pelted and pro-Pakistan slogans are still being shouted.

The reason: There are other blocks too in the battle zone, like fighting the Jihad, the separatism, the religious extremism but they are left undefended. Thus, the continued losses since last three decades. We have not put sufficient intellectual energy, and resources, and work towards the other Blocks specifically and then all the Blocks together. Successful counter-insurgency must involve several dimensions including all blocks.

While implementing western concepts in India we tend to forget that those powers have invaded those nations on the pretext of fighting the ISIS and the Taliban. They are using brutal force and weapons of mass destruction which includes; guns, missiles, tanks and drones to eliminate the so-called bad terrorists. They are rank outsiders for the regions yet indulging themselves in a bloodbath and creating havoc amongst the common people with a sole aim to keep winning the first block. The efforts in the other two blocks are for show off and making a balancing act so that the heinous bloodshed and destruction can be justified with their namesake humanitarian aid work.

The ‘three block war’ concept has many flows, as the battle gets fierce and bloody due to collateral damage, the soldiers become more and more unpopular. The guerrilla fighting with the terrorists has forced the soldiers into taking a heavily armed posture, many times against Kashmiri local boys who have become mujahidin under influence of Pakistan sponsored proxies.

The Kashmiris don’t see the evil of their own people. But, the military fighting the satanic Jihadi forces as a part of their duty to keep the society free from evil forces is finding itself in the line of abhorrence of the local people. We must open our eyes towards a fact that we are losing it socially in Kashmir. The olive green has become a symbol of hatred for a vast majority of people from five terror-infested districts of the valley.

The US and their coalition forces have bombed Syria, Iraq and Afghanistan to stone-age. No regime in India can ever afford to bomb its own lands – the godly valley of Kashmir and bring it to ruins. The Jungles of Pine and Deodar and oak, the apple orchards, the towns, the landscapes, the Himalayas, its inhabitants and the whole valley itself are as much Indian as we all are. India’s wish in the Kashmir conflict is nothing less than a thumping win in all the Nine blocks which will ensure the return of ‘Jamhuriyat, Kashmiriyat and Insaniyat’. A pyrrhic victory in Kashmir is not something, we Indians wish for.

There can be no winners in a civil war. The idea of India must be religiously, socially and politically assertive in Kashmir but, to be able to achieve the desired insolence. We will have to abolish Articles 370 and 35A, from the constitution of India. These separatist provisions of our constitution have been established to be the Achilles heel for India as far as Kashmir is concerned.

When a government spends so much of money and efforts into rehabilitation and reform of civilization and gets pelted with stones, the signs are worrying and warrant immediate course correction and strict disciplinary actions against the society concerned. We have failed to take a single step for de-radicalization of unruly people of the valley. For an avid reader of India’s military history, one is disappointed with the lack of innovative thinking from the Indian think tank, while battling Kashmir issue.

Matter of fact is that the troops fighting on the front can only march ahead if their rear is secure. Stone pelting, terrorism, separatists, ceasefire violations, infiltrations from across the border, BAT attacks and the unholy spread of Jihadist propaganda through mosques, processions and cyber Jihad clearly shows that our backyard is not safe & secure. The barrage of attacks by bombs, bullets, stones and abuses from the rear, make the soldiers vulnerable. A soldier never fears the enemy from outside but, it is the enemy within that makes one’s knees weak in a war.

A hybrid war lurking in our own backyard can be won only when all ends are secure. While deploying the Armed Forces to battle it out upon all the fronts of the Kashmir Chakravyuha, we are falling prey to cons of the western way of war fighting on foreign lands. As the struggle of Kashmir is happening in our backyard, our biggest strength should be our own people, who actually are our major weakness in the valley.

We must remember that Kashmir to India is not what Gaza is to Israel. The state of Jammu and Kashmir is and will remain an integral part of India. 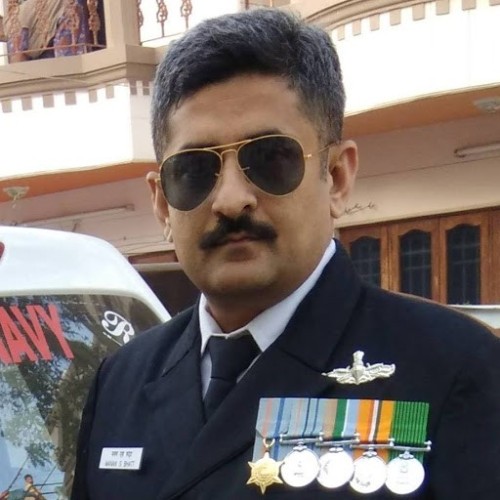 Petty Officer Manan Bhatt
Petty Officer Manan Bhatt is a Retired non-commissioned officer of the Indian Navy having participated in Kargil War and Operation Parakram. He joined the Navy in the year 1997 and hanged his boots in the year 2012, after 15 years of distinguished military service that included service onboard Frigate and Corvette class Warships, appointments in Integrated Head Quarters of Defence, Defence Research and Development organization (DRDO) and some more coveted Indian Naval establishments. Petty officer Bhatt, has also served very closely with the Indian Navy’s elite Commando Force – MARCOS. He has also served foreign assignments in Russia, USA and other friendly Nations. He is an expert in the field of Nuclear Biological and Chemical Warfare and Defence I ncluding Fire and Safety. Petty officer Bhatt has done extensive research for two years for this Book ‘KARGIL YUDHDH’ and immortalized the war stories of heroism of martyrs of a war that was fought 20 years back, through the memoirs of their fellow soldiers. He continuously writes and talks about stories of valour and heroism of Indian Jawans. He is also an avid thinker on National Security and the problem of Terrorism. Through, ex servicemen welfare organization, Suryodaya Maji Sainik Mahamandal, Rajkot his team is continuously striving very hard for rehabilitation and resettlement of widows of soldiers, martyred soldier’s families, disabled ex servicemen and Ex servicemen in general. Suryodaya Maji Sainik Mahamandal is the only organization in the entire state which exclusively renders help in solving issues related to pension and medical aid of ex-servicemen. The Author can also be contacted on his e-mail: sainikswaraj @ gmail.com.