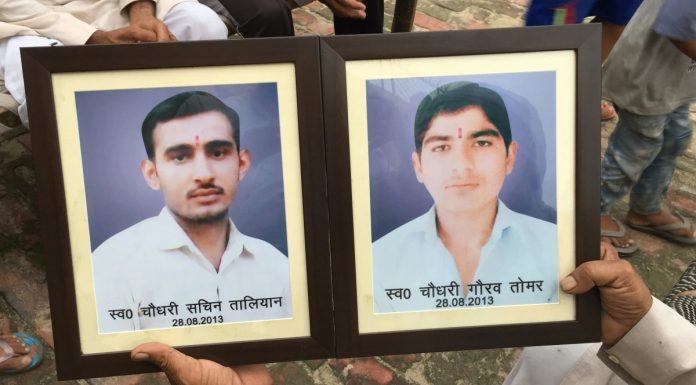 A sessions court on Wednesday convicted seven accused in the Kawal double murder case of August 2013, which is said to have triggered the infamous Muzzafarnagar riots, which had left almost 60 people dead and more than 50,000 people were displaced. Five of the convicted are already in prison, while the bail of the other two stands cancelled.

Muzassim, Muzammil, Furquan, Nadeem, Jehangir, Afzaal and Iqbal have been convicted for beating to death Gaurav and Sachin on the day of August 27, 2013. They were convicted by the court after examination of 10 prosecution witnesses and 6 defence witnesses.

According to reports, cousins Gaurav and Sachin had allegedly thrashed and stabbed a boy called Shaanazwa, after it was reported that he had harassed their sister. Following which the seven accused killed both in retaliation.

“Ravindra Singh, Gaurav’s father, had lodged an FIR for murder at Jansath police station against Muzammil, Mujasim, Furqaan, Jehangeer, Nadeem and Shahnawaz. Shahnawaz was killed later in retaliation to the murder of Gaurav and Sachin,” Anil Zindal, the lawyer for the complainant was quoted by Indian Express.

The names of two other accused of Iqbal and Afzal were added later.

A counter FIR was also lodged by the father of Shahnawaz incriminating Sachin and Gaurav for killing his son. But, an SIT in 2015 had given a clean chit to 5 accused in the case, while two other accused Gaurav and Sachin were already dead.

“I have faith in court. We hope justice will be done. Once we get a copy of the sessions court verdict, we will move to high court.” Father of two convicted Muzassim and Muzammil said. He also accused local police of doing investigation unfairly hiding the truth.

Over 6,000 cases were lodged following the 2013 riots and 1,480 accused were arrested for their alleged roles in the riots. A SIT had filed charge sheets in 175 cases.