China had objected to PM Modi visiting Arunachal on February 9, where he had launched several development projects 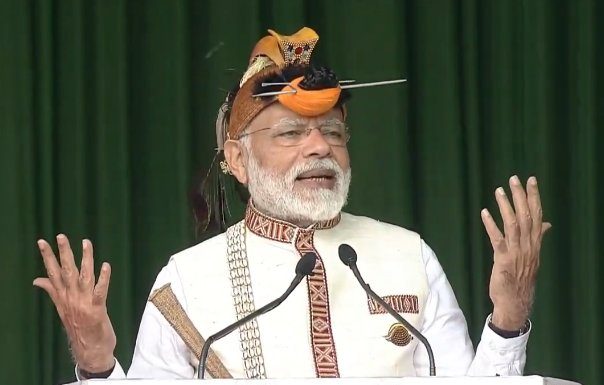 The People’s Republic of China seems to have to been rattled after Prime Minister Narendra Modi visited Arunachal Pradesh today. Modi inaugurated various development projects in the state. Chinese Foreign Ministry spokesperson Hua Chunying said that PM’s visit to the state, which it dubs as South Tibet, will complicate the so-called border dispute.

China does not recognize the area India calls “Arunachal Pradesh” and firmly opposes Indian PM Modi’s recent visit to the disputed area. China’s stance on the issue of the China-India border is consistent and clear, a Chinese Foreign Ministry spokesperson said on Saturday pic.twitter.com/l3hwf6lmXY

PM Narendra Modi reached Itanagar in the morning from Guwahati, where he unveiled several development projects at IG Park. The prime minister laid the foundation stone for the construction of Greenfield Airport at Hollongi near Itanagar. He also dedicated a 110 MW Pare Hydroelectric Plant in the state to the nation.

“China’s position on the China-India boundary question is consistent and clear-cut. The Chinese government has never recognised the so-called ‘Arunachal Pradesh’ and is firmly opposed to the Indian leader’s visit to the East Section of the China-India boundary.” Chinese spokesperson was quoted by reports. She also added that India should refrain from escalation or complication of existing problems, and “cherish the momentum of improvement in bilateral relations.”

The spokesperson for Ministry of External Affairs Raveesh Kumar hit back at China’s comments and stated that Arunachal Pradesh is an inalienable or integral part of India. He also added that China should not be bothered about Indian leaders visiting the state.

“The consistent position has been conveyed to the Chinese side on several occasions” The statement read.

China on many instances has indulged in cheap diplomatic tactics to exhibit its hegemony over the state of Arunachal Pradesh.

In October last year, China had expressed objection to  Minister of State for Home Affairs Kiren Rijiju’s visit to Arunachal Pradesh, which also happens to be leader’s home state. In April 2017, during the visit of the Dalai Lama to Arunachal Pradesh, China had warned about taking “necessary measures” to defend its territorial sovereignty and accused India of “obstinately” allowing the Tibetan spiritual leader to visit the “disputed” parts of the Northeastern state, causing “serious damage” to bilateral ties.

India and China have taken part in 21 rounds of talks over the so-called dispute. The same issue was also one of the prime reason for the 1962 Indo-China war, which had left many Indian soldiers martyred. China currently also has territorial disputes with other countries like Vietnam, Japan and the Philippines.