OpIndiabringing the \'right\' side of India
More
HomeOpinionsThe Congress ecosystem is investing full scale in discrediting the Indian election
Editor's picksFeaturedOpinionsPolitics
Updated: 18 May, 2019

They have been calling the EC a variety of names in recent days. How far do you think we are from that New York Times or Economist article saying that Indian elections are compromised?

Here is a curious fact. How many rallies did Narendra Modi hold in Varanasi city in the course of his 2014 election campaign?

The answer is zero. None. Which must be a record of sorts in what was always a record-breaking campaign.

Why? Because they wouldn’t let him. The EC would not give Narendra Modi a needlepoint of land to hold a rally in the city. 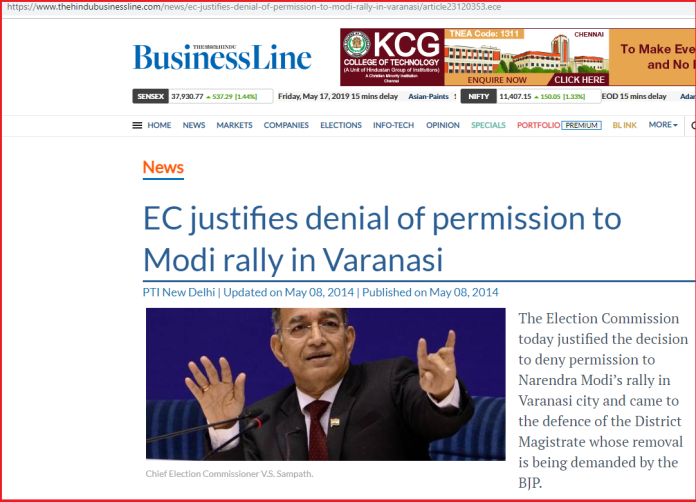 A day before polling in Varanasi, the EC struck again. A raid on the BJP’s election office in Varanasi.

“Campaigning material seized”: A headline that must be considered quite extraordinary and shameful in what is supposed to be a free and fair election in a democratic country.

The extraordinary persecution of Narendra Modi at the hands of the Election Commission in 2014 (and many times before that) is a long forgotten affair. Over the last few days, there has been a volley of criticism from liberals against the Election Commission, with allegations that they have shown a pro-BJP bias.

You must be wondering what exactly they are complaining about.

In fact, in the odd case that the EC has intervened in this election, it has actually done so with a measurable bias against BJP.  Remember that Yogi Adityanath was banned from campaigning for three days and Mayawati was banned for two days. In other words, 50% extra punishment if you are from the BJP. How much more clear could the double standard of the Election Commission be?

Then, what are liberals complaining about?

There are two reasons for this. The first is habitual. Earlier when liberals wanted the EC to jump, the EC would reply with: how high? Not so much any more.

The second reason is much more sinister. I will explain that later in the post.

First, let me tell you what kind of Election Commission the ‘secular’ ecosystem had come to expect over the years. 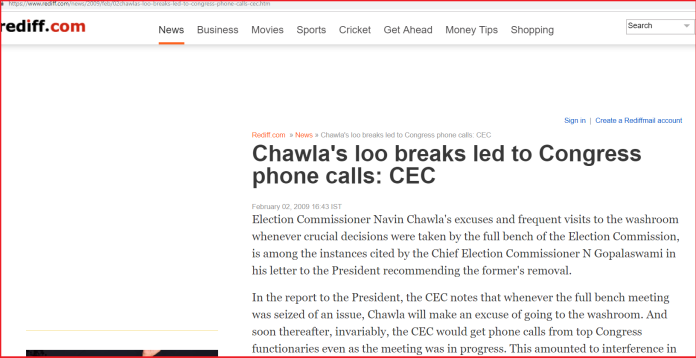 The reason? CEC Gopalaswami claimed that Chawla’s bathroom breaks were leading to phone calls from the ruling party!

Can you imagine the reaction if an allegation like this were to come up today?

It still amazes me how little this matter was even mentioned back in 2009. A staggering example of how something can remain in the public domain yet hidden in plain sight if all the big stakeholders have reasons to keep their mouth shut.

Shudder. Feeling lucky that Indian democracy somehow survived? Wait till you find out more about the history of Navin Chawla.

I must say I’m truly proud of our Election Commission. Holding the world’s largest election under the leadership of a man accused of misusing power during the Emergency!

If this is not giving you the shivers already, allow me to direct you to an older article I had written documenting an even darker episode from 2007 when BJP nearly got banned. Not kidding. Go check it out.

While BJP has been raked over the coals by the Election Commission, nearly getting banned, you wouldn’t be surprised to hear who get VVIP privileges from the same EC. 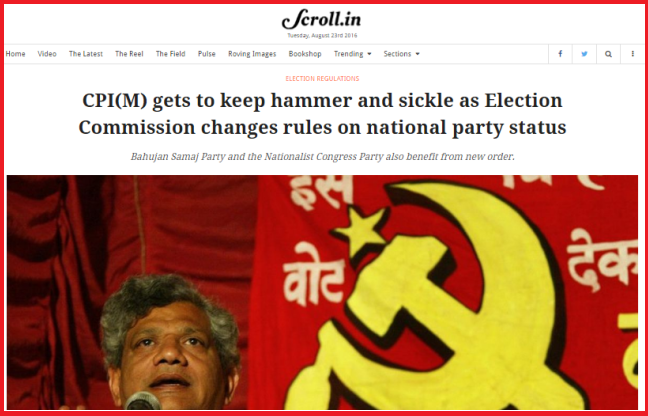 But not to worry. After the people have spoken, we always have the Election Commission to overturn their verdict and change the definition of “National Party” to suit the secular parties.

The disturbing thing is that this is not even the first time the EC did so.

In the 1999 Elections, the CPIM did very poorly, falling below the threshold of “National Party status”. In 2000, the Election Commission had dutifully changed the rules, allowing CPIM to keep their status.

Our votes don’t matter as much as we think. As long as the Election Commission is there, I think they will find a way to award “National Party status” to the CPIM even if they don’t get a single vote in the whole country.

The same EC that tried to ban the BJP in 2007, with its 100+ Lok Sabha MPs and half a dozen elected Chief Ministers.

There is a difference between being in power and being in the establishment. Now you see.

Now you also see how irritated the opposition must be right now that their once docile EC is no longer listening to every little whim of theirs. Possibly the days of bathroom breaks leading to Congress phone calls is long gone.

As I said before, the second reasoning they are complaining so badly is far more sinister. This is the official beginning of a huge campaign to discredit India’s elections in the eyes of the whole world.

They have been calling the EC a variety of names in recent days. How far do you think we are from that New York Times or Economist article saying that Indian elections are compromised?

They already dubbed India as “lynchistan”. From America to Europe to South America, liberals have managed to label India and Hindus as the most intolerant people in the world.

They keep saying India is ruled by Hindu Taliban. Telling the world that this “Hindu Taliban” rigs election is only the next logical step for them.

Do not underestimate this campaign. Yes, few people in India will be convinced by this silly campaign. But this campaign is not aimed at us. It is aimed at everyone else. If they can convince people that sarees are symbols of Hindu fundamentalism, they can do a lot of things that will adversely affect us in this global economy.