The locust attack has not just destroyed crops but has also affected the livelihood of farmers. Locust is a kind of a grasshopper that usually move in large numbers and devour the crop wherever they settle 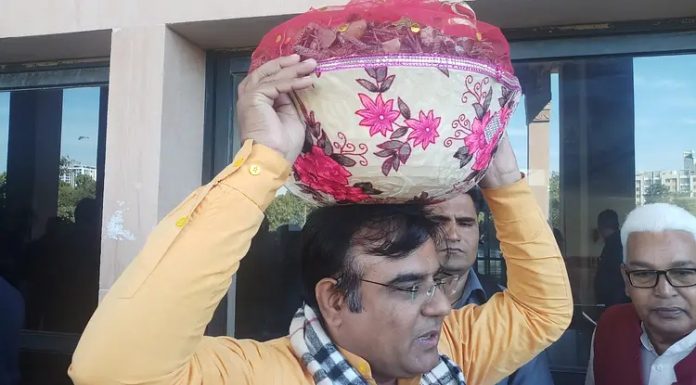 Rajasthan BJP MLA Bihari Lal Nokha walked in the Rajasthan Assembly with a basket full of locusts on Friday to draw the attention of state government towards its increasing menace in the fields of Rajasthan.

The BJP MLA has demanded swift action from the state government to compensate the farmers whose crops have been destroyed by locusts.

“The farmers in the state have faced huge losses due to the locust menace and the government should pay them their compensation. Over seven lakh hectares of crops have been damaged,” Nokha informed while speaking to ANI.

Rajasthan: BJP MLA Bihari Lal Nokha enters state assembly with a basket of locusts. He says, “Farmers in the state have faced huge losses due to locust menace and government should pay them complete compensation. Cultivable land of seven lakh hectares has been damaged”. pic.twitter.com/Bju5ihXJYE

Eleven districts of the state are facing the worst locust attack after 26 years. Control measures have been undertaken on 3.70 lakh hectares of affected land, officials said.

“The seriousness of the government is visible in addressing the issue of locust attack in western Rajasthan that has damaged crops on lakhs of hectares of land,” Nokha (Bikaner) MLA Bihari Lal told reporters in the assembly building.

“Instead of taking the issue very seriously, the government is focused against the Citizenship (Amendment) Act. The farmers have suffered huge losses due to the locust attack and the government should expedite the compensation distribution process,” he added.

This year the Locust infestation has been very severe in the region. Apart from ruining crop in Gujarat and Rajasthan, several places in Pakistan are also facing this problem. Rajasthan is experiencing the worst locust attack in 26 years. The locust attack has not just destroyed crops but has also affected livelihood of farmers.

Locust is a kind of a grasshopper that usually move in large numbers and devour the crop wherever they settle. According to experts, the insects have come from Oman side due to wind direction.